Working in conjunction with Bullfrog Power, TD Bank Group has just become one of the greenest companies in Canada’s greenest city, Vancouver. 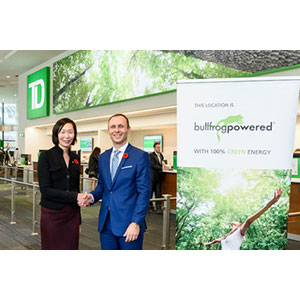 TD is using all of Bullfrog’s renewable energy products to clean up 100 per cent of its energy footprint in its Vancouver branches, as well as a portion of its business-related travel in the city.

“What we’re trying to do, TD and the city is show individuals and companies have to take action.,” Santilli said.

He noted that industry often wants to wait and see what government will do. “But we also believe together with government, industry need to take responsibility for their footprint and we’re there as a solution to help them do that.”

The collaboration between the two organizations supports the City of Vancouver’s Greenest City Action Plan, which has the goal of reducing community-based greenhouse gas emissions by 33 per cent from 2007 levels by 2020.

Being sustainable will be about more than electricity

Karen Clarke-Whistler, TD Bank Group’s Chief Environment Officer, said that the bank has been carbon neutral and generated 100 per cent of its energy from renewable sources for a number of years.

Clarke-Whistler said the bank want to line up with the carbon policy coming in across Canada and demonstrate that being sustainable will be about more than electricity and that technologies exist to do so.

“The idea was to pilot an approach in the City of Vancouver, which has a very strong renewables objective and just to say, perhaps, here’s how a future world could look,” Clarke-Whistler said.

“This is more than about turning out the lights. It’s really evolving to using the resources that form the basis of our everyday life in a totally different way and from totally different sources. It’s going to be something that all of us are going to have to show a commitment to as we try to reach our carbon reduction targets.”

“Having this commitment really gives insight into innovative technologies”

Clarke-Whistler said the bank isn’t prepared to roll out a similar program across the entire company because of the expense of the emerging technology and called it a demonstration for the time being.

“But if you ask me what we will look like by the year 2030, I think we could all look very much like this configuration.”

She noted that in its early days solar power was expensive, but 10 years later prices have dropped dramatically.

Clarke-Whistler pointed out that TD is a leader in the environmental field with a focus on energy reduction and a transition to the low carbon economy.

“It’s really because we see this as the way the world is going and doing these types of projects and having this commitment really gives insight into innovative technologies, and helps us identify early opportunities in the market.”

Bullfrog’s biofuel program is relatively new, launched this past summer. Currently about 10 companies use the program.

Bullfrog first launched 11 years with its renewable electricity program and then branched out six years ago into using methane from landfills to help offset natural gas.

What customers purchase from Bullfrog is a so-called “environmental attribute.” Bullfrog buys equivalent volumes of renewable energy from its suppliers based on their customers’ volumes and then has those put into the grid.

“That displaces the need to buy fossil fuel in the first place,” Santilli said.

All the transactions are audited on an annual basis from the supply and demand sides to ensure they add up.

Santilli noted that when companies report to CDP, they look at their footprint in three areas, Scope 1, 2 and 3 and these products address all those areas.

Bullfrog Power’s green energy is enabling TD to address the energy used in its Vancouver branches, as outlined under Scope 1 and 2 of the GHG Protocol, and business-related travel under Scope 3.