Vancouver’s TELUS Garden office tower is officially one of the greenest buildings in North Americ...

Vancouver’s TELUS Garden office tower is officially one of the greenest buildings in North America after receiving a Leadership in Energy and Environmental Design (LEED) Platinum certification from the Canada Green Building Council. 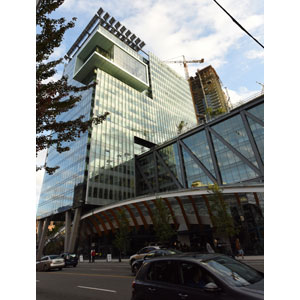 “With great pride, we opened our doors last fall and welcomed our community to experience this innovative space and become inspired by the promise it holds for future generations,” TELUS chief communications and sustainability officer Andrea Goertz said in a media statement.

The one-million-square-foot TELUS Garden development is the result of a partnership between TELUS and Westbank. It includes the 22-storey office tower and a 47-storey residential tower currently under construction and targeting LEED Gold standards with 424 suites and retail space along Robson and Richards Streets.

* A district energy system that will reduce demand from conventional energy sources by 80 per cent and reduce carbon dioxide emissions by more than one million kilograms a year. The system recovers energy from the neighbouring telecommunications building and uses it to heat and cool air and water throughout the development;
* Vancouver’s largest solar panel array on the office tower’s rooftop, reducing reliance on conventional commercial electricity;
* Rainwater capture systems to irrigate gardens throughout the development;
* 10,000 square feet of outdoor meeting space and garden terraces on six levels planted with a community food garden that will be tended by the telecommunication company’s team members;
* An architectural canopy along Georgia Street that provides coverage to a new public plaza that features seating, music and a free Wi-Fi zone;
* Vancouver’s first cantilevered office spaces above city sidewalks, which enhance the building’s design while maximizing the use of vertical space;
* A media façade that displays community programming, including visual arts created by local students and arts organizations;
* Advanced building systems, including a ventilation system that provides fresh air to residents and workers rather than the recycled air typical of towers;
* High-efficiency motion sensor lighting to significantly reduce energy consumption;
* Charging stations for electric vehicles;
* Bicycle storage and showers;
* 450,000 square feet of new office space and 65,000 square feet of new retail space, including TELUS’ flagship 2,300-square-foot retail store.

More than 1,000 TELUS team members as well as tenants from companies including Amazon, Accenture, Capstone Mining Corp. and the Bull, Housser & Tupper law firm work in the office tower, which is part of a $750-million development that’s transformed an underutilized block of downtown real estate between Georgia, Robson, Seymour and Richards streets.

“The LEED Platinum certification embodies our commitment and dedication to create a world-class development where the sustainable design not only mirrors the culture and values of TELUS team members, but also the tenants and businesses who have now become a welcomed part of this environmentally conscious community,” Westbank president Ian Gillespie said in a statement.

Westbank’s focus is on large mixed-use projects that place importance on sustainability. It was established in 1992 and has completed $25 billion of projects in Canada and the United States.