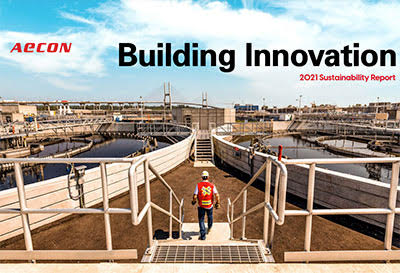 Aecon Group Inc. is one of Canada’s largest construction and infrastructure development companies with global expertise in the civil, urban transportation, nuclear, utility and industrial sectors. With revenue north of $3.9-billion and 30 per cent of its board made up of women, it has been recognized as one of Canada’s Best Employers.

The company is planning to reduce its direct CO2 emissions by 30 per cent by 2030 and reach net zero by 2050. It also announced it achieved a 15 per cent year-over-year CO2 emissions reduction on an intensity basis and completed a comprehensive GHG inventory, according to the report.

With more than $295 million in renewable energy projects and another $1.43 billion in non-energy projects associated with climate change mitigation, Aecon is emerging as a Canadian leader in sustainable construction projects, according to the report.

Aecon was engaged to construct the pipeline at the facility, which will provide lower-carbon fuel to 3,600 customers.

The facility itself was built through a joint venture with Cummins Inc., a U.S. company headquartered in Indiana, that designs and manufactures diesel and alternative fuel engines and generators.

Another promising project — the 66-storey EX3 tower in Mississauga, Ont. which will get its heating and cooling through a geothermal exchange system — will be completed in 2026.

Diverso, a provider specializing in geothermal energy solutions, and Aecon GeoExchange Solutions, collaborated to build the large-scale system for developer Camrost Felcorp. The building, when complete, will be the tallest geoexchange-powered tower in the province, according to the report.

There will also be an adjacent 51-storey residential and hotel tower.

PSP Investments has launched its first Climate Strategy Roadmap to build on emissions reduction targets across its investment portfolio.

PSP Investments is one of Canada’s largest pension investment managers, with $204.5 billion of net assets under management as of March 31, 2021. It is a Canadian Crown corporation that invests funds for the pension plans of the federal public service, the Canadian Forces, the Royal Canadian Mounted Police and the Reserve Force.

As it aims to reach net-zero emissions by 2050, the new roadmap will increase investments in assets that support climate mitigation and adaptation.

In addition, it will aim to reduce exposure to carbon-intensive investments that don’t have transition plans.

Also announced was a plan to steer at least 10 per cent of PSP’s long-term debt financing toward sustainable bonds.

Earlier this year, the Public Sector Pension Investment Board published a green bond framework, which is aligned with existing standards in green bond and sustainable debt markets.

As the pension fund looks to support strong financial performance and responsible investment outcomes, the framework will enable the organization to answer investor demand for sustainable debt products.

Check out the full report here.

With $367 billion in assets as of January 31, 2022, the National Bank of Canada is one of Canada’s biggest commercial banks. It has more than 27,000 employees and has been recognized as a top employer for its commitment to diversity. The National Bank of Canada is headquartered in Montreal and has branches in most Canadian provinces, with more than 2.4 million personal clients.

Building on its goal to reduce GHG emissions from its operations by 25 per cent by the end of 2025, the Bank announced a plan to reduce its financed emissions for the sub-sector by 31 per cent by 2030 for Scope 1, 2 and 3.

On September 25, 2020, the Bank announced an interim target to reduce GHG emissions from its operations by 25 per cent by the end of 2025.

Through partnerships with the Net-Zero Banking Alliance and the Partnership for Carbon Accounting Financials (PCAF), the bank has been able to measure our financed emissions and make capital available for the transition.

In addition, it’s a part of the Climate Engagement Canada (CEC) initiative, the Risk Management Association (RMA) Climate Risk Consortium and the Statement by the Quebec Financial Centre for a Sustainable Finance.

The bank is also building a new office in Montreal. The LEED v4 Gold and WELL standards tower will include 400 bicycle parking spots and 100 EV charging stations, carrying an economic impact of $1.2 billion.

PortsToronto saves more than 530 tonnes of CO2 emissions in 2021

The first electric, lithium-ion ferry in Canada, powered by 100 per cent renewable wind and solar energy, and partnerships with local organizations to plant more than 600 trees and shrubs were among the top accomplishments released in PortsToronto‘s seventh annual sustainability report.

PortsToronto is a government enterprise that owns and operates Billy Bishop Toronto City Airport, which welcomes more than two million passengers each year; the Outer Harbour Marina, one of Canada’s largest freshwater marinas; and Marine Terminal 52, which provide marine transportation, distribution, storage and container services to businesses at the Port of Toronto.

Converting the Marilyn Bell I to electric power has eliminated the consumption of approximately 196,000 litres of diesel fuel per year, according to the report. It will also reduce the airport’s direct emissions by approximately 530 tonnes per year.

PortsToronto has also been able to offset CO2 emissions at Toronto’s Billy Bishop Airport through its partnership with Bullfrog Power Ltd., with which they’ve been in business since 2010.

Throughout the life of the partnership, PortsToronto has displaced more than 28,252 tonnes of CO2 — the same amount of CO2 emissions produced by the consumption of 11,977,885 litres of gasoline.

This is the equivalent of taking 6,131 cars off the road for one year or diverting more than 9,606 tonnes of waste from the landfill.