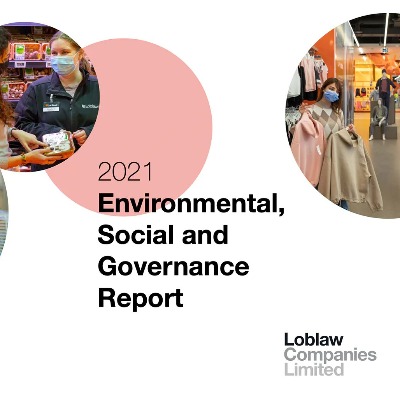 Loblaw updated its target dates in its 15th annual ESG report, noting it plans to achieve net-zero by 2040 for Scope 1 and 2 emissions, and net-zero by 2050 for Scope 3. It also plans to reduce emissions in its operations by 50 per cent by 2030.

As it aims to reduce its corporate carbon footprint by 35 per cent from a 2016 baseline, Loblaw will look to operate a zero-emissions vehicle fleet by 2030.

Cutting plastic use and reducing food waste have also been top of mind for Loblaw. It plans to make all in-store plastic packaging recyclable or reusable by 2025, and announced intentions to send zero food waste to landfills by 2030.

On a corporate level, Loblaw has taken steps to introduce diversity, equity and inclusion (DEI) programs and sustainability initiatives. It also plans to deploy an inclusion training program to the company’s workforce of more than 200,000 by the end of 2024.

On the philanthropic side, Loblaw raised a record $96 million for research, charities and not-for-profits across Canada and invested $1 million in plastics research and community clean-ups.

To continue progress on its ESG standards, Loblaw could soon introduce a short-term incentive program, beginning later this year.

Manulife Financial Corp. announced it has $67.4 billion in sustainable investments in its company-wide portfolios. In its latest ESG report, Manulife also says 82 per cent of its real estate investment portfolio has obtained a green building certification.

Manulife has committed to achieve net-zero financed emissions by 2050, and to reduce Scope 1 and 2 emissions 35 per cent by 2035.

It also committed to reduce paper volume by 35 per cent by 2025 and ensure remaining paper is from sustainable sources. In addition, it announced 100 per cent of Manulife Bank ATMs are powered by green energy.

Projects at Manulife-owned forests and farms have removed 1.51 million metric tonnes of carbon dioxide from the atmosphere over five years.

Approximately 61 per cent of its managed farms use regenerative farming practices and have sheltered over three million bees in 78 urban beehives to produce over 900 kilograms of honey. Over 479,000 acres of land is also protected by the Manulife Investment Management Timberland and Agriculture Sensitive Lands program.

Socially, Manulife reached one target ahead of schedule, reporting 31 per cent of Manulife’s positions at the VP level and above are held by women.

It also says 54 per cent of the independent directors on Manulife’s Board are women, while 23 per cent are racially or ethnically diverse.

The annual sustainability report is compliant with the requirements of the Global Reporting Initiative (GRI), the Sustainability Accounting Standards Board (SASB), the Task Force on Climate-related Financial Disclosures (TCFD), the United Nations Sustainable Development Goals (SDGs) and the Stakeholder Capitalism Metrics, published by the International Business Council of the World Economic Forum.

VIA Rail unveiled details on its new sustainability plan, which rests on six environmental, social and governance (ESG) priorities.

Cynthia Garneau, president and CEO at VIA Rail, said the passenger rail service will look at reducing its environmental footprint and enhancing its role as a responsible transportation provider.

The company has committed to reduce GHG emissions by at least 30 per cent by 2030, compared to a 2005 baseline, and is aiming to offer a zero-waste train service in coming years.

Over the next several years, VIA will work to improve fuel and energy efficiency in all operations and train all employees on sustainability initiatives.

2021 ridership saw a year-over-year increase of 31.9 per cent while passenger revenues increased by 54.3 per cent.