A new report from the University of Waterloo argues for the Public Sector Accounting Board to rec... 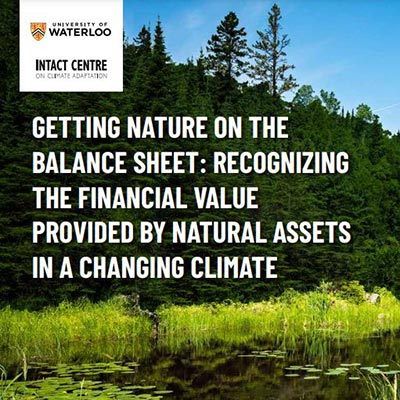 A new report from the University of Waterloo argues for the Public Sector Accounting Board (PSAB) to recognize the financial value of natural assets such as wetlands, forests and rivers and rethink accounting rules to protect natural resilience.

The University of Waterloo’s Intact Centre on Climate Adaptation‘s latest report — Getting Nature on the Balance Sheet: Recognizing the Financial Value of Natural Assets in a Changing Climate — includes over 70 signatures from politicians, private sector executives, non-profits and more. The report was co-authored with KPMG Canada and the Municipal Natural Assets Initiative (MNAI).

“Society revolves around money in terms of our value system, it’s money, people and then maybe nature at the bottom. Whereas on Truth and Reconciliation Day, when I’ve talked to Indigenous people, their values are nature first, then people and then money maybe at bottom,” said Joanna Eyquem, managing director of climate resilient infrastructure at the Intact Centre and one of the co-authors of the report.

“So in order to manage nature effectively, we have to put it in terms of what society values and that is primarily money.”

Aside from removing the exclusion of natural assets from accounting, the report recommends the establishment of national natural asset guidelines and standards, as well as pushing for financial institutions to make investments in natural capital.

The PSAB is a group — independent from CPA Canada — which develops accounting standards for the public sector. Currently, its 14 volunteer members include Elham Roushani, the CEO of Ontario Health; Heather Taylor, the City of Toronto’s CFO and treasurer; and Scott Munro, the deputy CEO of the First Nations Financial Management Board.

The Intact Centre is an applied research centre at the university founded in 2015 with a gift from Intact Financial Corporation, Canada’s largest property and casualty insurer.

SustainableBiz had previously reported on the Centre’s papers regarding rising sea levels, flood and heatwave risks.

Eyquem and the report both argue for the recognition of the value of natural assets in Canada. One figure cited from the World Economic Forum’s New Nature Economy series states more than half the world’s GDP — over $60 trillion — is moderately or highly dependent on nature and its services.

“Everybody says they’re interested in capital and investing,” Eyquem said. “But if you could demonstrate the financial benefit of restoration, for example, increasing services and climate resilience, so something like that, then that would make investment in nature easier.”

B.C. is the province with the most local governments undertaking natural asset management projects — including inventory, modeling and valuation — at 35, followed by Ontario at 27 and New Brunswick with 11. Manitoba, Saskatchewan and the Northwest Territories have only one each.

Eyquem said these governments have done the work to evaluate their natural assets but can’t include them in financial statements as a result of the Public Sector Board exclusion. She said Calgary had gone through this process and found natural assets are its fourth-most valuable asset class.

The report features a number of different case studies in Canada, which show the direct financial benefits of the country’s natural landscape. Some examples are drawn from other reports, but for several case studies the modeling was done by MNAI in a similar fashion to engineering assets, although the methodology differs for each case.

“One of those drivers of the report is also standardization,” Eyquem said. “What we want to do is standardize methods for evaluation of natural assets as well so that it’s very transparent, the methods being used, so that people have confidence in the values that are being produced.”

Some of the case studies included are:

“A lot of climate finance is going into climate mitigation. Only 10 per cent goes into resilience,” Eyquem said. “So investment in natural resilience is actually flagged as a key opportunity by the task force for nature-related financial disclosures as well.”

KPMG Canada’s status as co-authors was done in part to make sure the report wasn’t just seen as another voice of a conservation group but also coming from the finance and accounting community. With that in mind, discussions with the PSAB are ongoing, and it was provided with an advance copy of the report. However, Eyquem said its due process can be quite slow. In the meantime, the authors are working on establishing interim standards.

“Because… we don’t have time for long-winded changes,” Eyquem said. “We want to move faster on this because climate change and biodiversity loss is not waiting for us to catch up.”

U of Waterloo report urges action to prevent ‘lethal’ heatwaves