Calgary-based Epoch Energy Development is conducting an extensive research and feasibility study to see if a Geothermal District Energy System is viable in the Town of Hinton in Alberta. 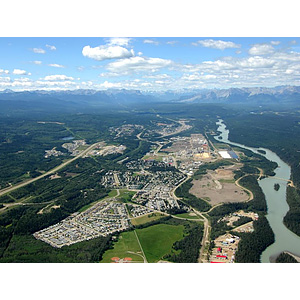 Photo courtesy of the Town of Hinton

The study, supported by all three levels of government, is looking at a proposed system that would produce renewable geothermal heat from marginally-producing oil and gas wells to heat the town’s public buildings.

Officials say the initiative could be the first project in Alberta and Canada that uses one or more oil and gas wells to heat buildings. Geothermal heat produced through this project could annually replace 60,000 to 150,000 gigajoules of natural gas usage.

T.M. Gunderson, one of the founders of Epoch and project manager for the Hinton study, said the company has been working on the Hinton project for about two years.

“Epoch is an energy developer. For this project we are leading the feasibility of determining whether we can build a Geothermal District Energy System. So leading everything from the engineering, construction, financial analysis and those kind of items,” said Gunderson.

“At the end of our project will be a go or no-go decision. We don’t know what the future partnership looks like, if it’s going to be wholly-owned by the town, wholly-owned by Epoch or another developer, or a combination thereof if the project is feasible.”

The company wants to have its report completed by the end of August. It will be presented to the Town of Hinton as well as to the three levels of government.

According to Epoch,  geothermal is simply energy derived from the Earth’s own natural heat. It is contained within the rocks and fluids beneath the surface of the Earth and has been found and accessed all over the world since ancient times. Geothermal resources are found in underground reservoirs and are used to generate electricity, heat and cool buildings directly, grow food like produce and fish and in industrial processes.

The company says geothermal energy is extracted and used without any additional fuel usage; it’s considered a fully renewable, clean energy resource; it produces little to no emissions; it runs 24 hours/day, 365 days/year; it is relatively inexpensive; and it exists in abundance in western Canada.

Donna Kinley, manager, consultations, marketing and communications with Western Economic Diversification Canada, said “the project has the potential to offer an alternate way to manage aging oil and gas assets across Alberta and at the same time create many engineering and construction jobs in a new low-carbon industry.

“We are supporting this pilot initiative to determine the viability of its application in not only Hinton, but other locations as well,” she said.

Recently, the Navdeep Bains, Minister of Innovation, Science and Economic Development and Minister responsible for Western Economic Diversification Canada, announced $400,000 in funding toward the engineering and design initiative. The Government of Alberta and Alberta Innovates is kicking in $800,000.

In a statement. Bains said: “When it comes to clean technology, Canada has the opportunity to be a true global leader – creating good jobs for Canadians while helping to meet our climate change goals. I applaud the Town of Hinton for exploring the use of ground-breaking clean technologies to capture and re-purpose geothermal energy for heating.”

Maureen Kolla, manager, clean power and heat with Alberta Innovates, said Hinton is the first to move ahead with this initiative.The low end of the gigajoule scale would replace natural gas usage for about 12 municipal buildings.

“There is definitely opportunity for other municipalities within the province,” said Kolla. “Part of what this project will determine is obviously the overall amount of GHG emissions that are reduced by replacing buildings that would otherwise use natural gas and will now be using a geothermal energy heat.

“It depends on how many gigajoules per year they will end up replacing will be the eventual impact it will have. That’s some of the information that we will find out from the (Epoch) study.”

Shannon Phillips, Alberta’s Minister of Environment and Parks and Minister Responsible for the Climate Change Office, said in a news release the provincial government is helping Hinton explore what could be the most transformative geothermal project in Canadian history.

“This technology, which leverages renewable heat produced from existing oil and gas wells, has enormous potential to pave the way for other geothermal projects in Alberta, creating future opportunities to diversify our economy and make life better for all Albertans,” said Phillips.

Hinton Mayor Marcel Michaels said the town has a long history of oil and gas exploration and the partnership with the three levels of government represents an opportunity to explore the future not just for Hinton but for Alberta and perhaps the rest of Canada.

Hinton is a community of 10,000, located just under 300 kilometres west of Edmonton.

According to the town, there are more than 4,000 wells drilled below 2,500 metres within a 70-kilometre radius of Hinton. Many have bottom-hole temperatures above 140 degrees Celsius. Research indicates Hinton is located in the epicentre of geothermal potential from hot water aquifers in the Western Canadian Sedimentary Basin, it says.