Vancouver’s first Passive House Plus home in the works

Work will soon be underway on Vancouver’s first certified Passive House Plus home. The two-storey...

Work will soon be underway on Vancouver’s first certified Passive House Plus home. 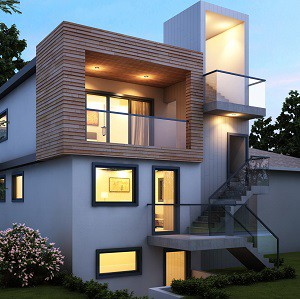 The two-storey house that will be constructed on 5th Avenue in East Vancouver was designed by Marken Design and Consulting.

When completed early next year, it will be the third of its kind nationwide, Marken Design principal Alexander Maurer said. The builders are now tearing down the existing home on the property.

The features reduce energy use, boost efficiency and maintain a more comfortable environment.

Passive Houses use up to 90 per cent less energy for heating and cooling and cost about 65% less to operate than standard houses, Maurer said.

He said the Passive House Plus designation is a major step forward. In addition to the standard requirements, the wood frame house will be equipped with a 3.75-kilowatt-hour solar power system on the roof that will produce about half the electricity the house needs throughout the year.

“What convinced our client to go for Passive House Plus are the extremely low operating costs, high standard of living and return on investment, amongst others,” he told RENX this week.

Vancouver’s Passive House Plus house will look from the outside like most modern West Coast-designed homes in the city. “From a feature point of view, it is much more-energy efficient than other houses on the block,” Maurer said.

There is currently about 600,000 square feet of Passive House projects under construction, or which have recently completed the rezoning process in the City of Vancouver. These include houses, townhomes and low density condos, said Chris Higgins, a green building planner with the city.

He said Passive House homes are more comfortable, quieter and have better air quality — as the buildings constantly pull in fresh, filtered air. “It’s something you can feel,” he said.

The 5th Ave. Passive House Plus will produce most of its own energy needs through the solar power system, but will pull power from the B.C. Hydro grid when needed, Higgins said. However, the house will also push any excess power back into the B.C. Hydro grid, he said.

Energy operating costs may zero out

“You’re producing energy at 10 cents (per kWh), and buying energy at eight cents,” Higgins said. “I wouldn’t at all be surprised if the energy operating costs zeroed out in a Passive House Plus.”

Higgins said they’ve been seeing a “great uptick” in Passive House interest in the market from residents, designers and builders. Much of that interest likely stems from the city’s own sustainable building requirements.

All Vancouver rezoning applications submitted after May 1, 2017 will be required to meet near-zero or low-emissions building standards. That requirement can be met by building to the Passive House standard.

The city is using the rezoning process to catalyze a movement in the design, construction and materials industry toward more sustainable housing, said Sean Pander, the city’s assistant director of sustainability.

Pander said homeowners who build to Passive House standards are given modest allowances for larger footprints and expanded heights to account for space lost due to thicker walls and roofs due to insulation requirements.

He staff are also becoming familiarized with the criteria to prevent inspection delays.

“We’ve sent two of our inspectors to a BCIT (British Columbia Institute of Technology) training course (on Passive House), so they’re very familiar with the different construction methodologies and the types of materials,” he said.

Maurer said the new city bylaws and response from Vancouverites suggests there will be more such projects in the future. “We assume that lots of projects going for rezoning will also go for Passive House,” he said.