One of Canada’s lowest-waste grocers is teaming up with the world’s largest retailer. It’s a move...

One of Canada’s lowest-waste grocers is teaming up with the world’s largest retailer. 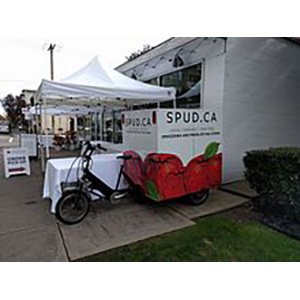 Created in 1997 in Vancouver, SPUD has become one of the largest online grocery delivery companies in Canada, with more than 600 staff.

In addition to organic grocery home delivery, the company has also expanded into small retail spaces.

After opening its first store in Kitsilano in 2015, Spud opened four other stores under the Be Fresh brand in Vancouver. In 2017, it opened the Blush Lane Organic Market with a total of five locations in Edmonton and Calgary.

He said the company’s goal is to eventually expand from 10 to 40 retail stores in Western Canada.

The company currently operates out of a warehouse on East Hastings near Commercial Drive in Vancouver, but is now working on a new state-of-the-art warehouse and logistics centre on Trapp Avenue in Burnaby, which will be the largest online grocery warehouse operating in Canada, van Stolk said.

“Part of our mandate is to maintain a very low carbon footprint,” van Stolk said. “We have proprietary technology that we own and that we developed over 20 years.”

He said the firm knows how to pick, pack and deliver efficiently and environmentally friendly.

“We have brought that food waste down to 1.5% for grocery and half a percent for produce,” he said.

He said global food waste, when measured in total GHG, would be equivalent to the third-largest country in the world, after the U.S. and China.

To meet its  targets, SPUD uses a made-to-order system for their fresh commissary products; reduces inventory pressure by shipping 80% of their inventory within 48 hours; and ships nearly all of its inventory within 12 days. The remaining “imperfect” or soon-to-expire food is donated to charities, the company says.

Van Stolk said having a brick-and-mortar presence has become an important part of the business model. “The food that we make in our commissary, which we sell in our online grocery operations . . .” he said. “It also supports the retail operations in our stores.”

To be relevant in this market, Spud realized it needed the right recipe for online service, home delivery, and retail outlets.

The company expects about 10-15% of that business to shift online to the home delivery model in the near future, positioning it well with its logistics centre and delivery model.

“You don’t have to be rocket scientist to figure out that maybe people aren’t going to be building more stores, because there is going to be more traffic online,” he said.

The deal with Wal-Mart will make it easier for Vancouverites to shop from their store online.

“We are always looking for new ways to offer convenience and choice to our customers so they can shop when they want and how they want at Walmart’s unbeatable prices,” said Lee Tappenden, CEO and president at Walmart Canada in a release.

“Our strategic collaboration with Food-X allows us to serve customers in the heart of Vancouver in an environmentally-friendly and sustainable way.”