Alberta is well positioned to capitalize on the growing hydrogen industry and attract investment... 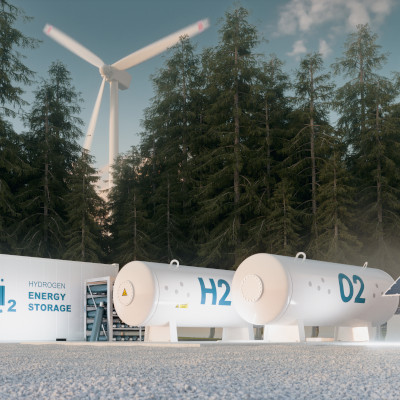 Alberta is well positioned to capitalize on the growing hydrogen industry and attract investment to the Edmonton region, according to a new report by commercial real estate firm CBRE.

David Young, executive vice president, managing director CBRE capital markets, said the company felt there is a need to sell and promote the province to convince investors “our economy is not just simply a one-trick pony.

“It’s super important for us to show the C-suite at the Canadian pension funds what’s actually driving our economy. Why would you want to invest in a region that has nothing going on?

“But this hydrogen hub opportunity that we’re promoting, it’s real. This is a reason they should be here,” said Young.

According to the CBRE report, Hydrogen Energy in Alberta, Canada has certain advantages which position it to lead the global hydrogen movement, including extensive hydroelectric generation and freshwater capacity, production resources and proximity to international markets.

Canada is among the top-10 hydrogen producers in the world today, said the report.

That Heartland is managed by five municipalities which include the cities of Edmonton and Fort Saskatchewan, and the counties of Sturgeon, Strathcona and Lamont.

Earlier this year, the Edmonton Region Hydrogen HUB was launched — an alliance of government, Indigenous, academic and economic development leaders to kickstart its low-carbon hydrogen economy and position the region, Alberta and Canada for success as the world shifts towards a low-carbon future to address climate change.

Its backers say the region offers one of the lowest hydrogen production costs in the world, existing experience in hydrogen production, a vast network of pipeline infrastructure and suitable existing sites for carbon capture, utilization and storage, which are necessary to upgrade natural gas into hydrogen for use as a low-carbon fuel.

“What we’re trying to do is just share the information of what’s going on in the province to let people know that the Province of Alberta is making a comeback with clean tech, clean energy and hydrogen,” said Young.

He said many people in Eastern Canada don’t understand the technological investments in recent years in green energy in Alberta — and that story has to be told.

“I’m starting to see businesses take a look at the region and say ‘how do we capitalize on this new hydrogen investment opportunity’ ” Young noted.

In June, Air Products confirmed the construction of a $1.3 billion-dollar blue hydrogen production and liquefaction facility in Edmonton. The facility’s target completion date is 2024 and it will create 2,500 jobs during the construction phase.

Upon completion, the facility is projected to produce 547,000 tonnes of hydrogen per year and capture three million tonnes of carbon dioxide per year.

“The organic, brownfield investment would significantly increase Dow’s capacity of advantaged ethylene, polyethylene and derivatives manufactured across Alberta — all while maintaining Dow’s enterprise-level commitment to keep capital expenditures at or below depreciation and amortization (D&A) levels,” said the company in a news release.

“The company expects to allocate approximately $1 billion of capex annually — or approximately one third of its D&A levels — to decarbonize its global asset base in a phased, site-by-site approach.

“Dow expects the new brownfield ethylene cracker to add approximately 1.8 million metric tons of capacity in a phased manner through 2030, and along with derivatives capacity and site retrofit investments, will enable the company to produce and supply approximately 3.2 million metric tons of certified low- to zero-carbon emissions polyethylene and ethylene derivatives for customers and joint-venture partners around the globe.”

Young said this shows big manufacturing companies that Alberta, and particularly the Edmonton region, is a viable locale to set up these types of operations.

“The Edmonton metropolitan region has been sort of the manufacturing, repair, maintenance and operation headquarters for the Canadian energy industry for the most part. We’ve always been that group here that has supported the energy industry,” he said.

“These new investments by Dow, by Air Products, they will create some jobs. So I think what will happen is you’ll probably see some immigration. Maybe some apartment rental vacancies go down as these jobs get created.

“And it will also stimulate some industrial demand from suppliers of these companies as they either locate here or expand their existing footprint here. The industrial business will be a benefactor of these major announcements, but the trickle down effect if it does create jobs, the multi-family market will be positively impacted, the retail business will be positively impacted.

“It’s the beginning of the sort of the new tech investment in the oil and gas business. It’s really quite exciting.”

According to the Alberta government’s Natural Gas Vision and Strategy report, global demand for hydrogen is projected to increase at least tenfold in the coming decades. The Hydrogen Council estimates by 2050, the global hydrogen sector could generate US$2.5 trillion per year and create 30 million jobs.

Kathy Kerr Transportation Sustainability Alberta May. 28 2021
M
Mario Toneguzzi Business reporter
Mario Toneguzzi, based in Calgary has 37 years of experience as a daily newspaper writer, columnist and editor. He worked for 35 years at the Calgary Herald covering sports, crime, politics, health, city and breaking news, and business. For 12 years as a business writer, his main beats were commercial and residential real estate, retail, small business and general economic news. He nows works on his own as a freelance writer and consultant in communications and media relations/training.