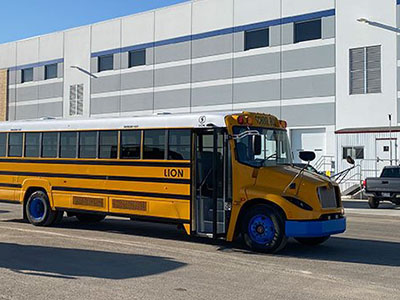 Avison Young Investment Management (AYIM) has acquired Clarius Park Joliet, an industrial facility in Chicago that will be used as a production site for Montreal-based EV manufacturer Lion Electric.

Purchased on behalf of its client, the Nova Scotia Pension Services Corporation, the 906,517 sq. ft. facility — due to open in late 2022 — will represent the largest dedicated production site for zero-emission medium and heavy-duty vehicles in the U.S. The facility has an expected production capacity of up to 20,000 vehicles per year.

“That was one of the primary things that attracted us to the investment — the story around Lion, how transformative that business could eventually become and having a willingness and a desire to support businesses like that going forward,” said Andrew Fraser, a director at AYIM.

Lion Electric based in Saint-Jérôme

This month, it also signed a deal with Cox Automotive Mobility to give Lion customers access to Cox’s 25 maintenance service centres, over 1,000 technicians and almost 800 mobile service trucks to provide on-demand support.

Lion Electric’s head office is in Saint-Jérôme, Que., and it also has offices in Sacramento, Calif., and Channahon, Ill.

AYIM began working on the transaction in October, 2021. Financial terms were not disclosed, although it was a “substantial investment.”

Amy Erixon, principal and president of AYIM, said while it was a protracted bid process, “we basically convinced them that being Canadian, we would be the easiest people to deal with.”

She said there are no immediate plans for other acquisitions in the sector, but AYIM considers the electric vehicle industry attractive for future investment.

“Certainly it’s one of the businesses that we think will have a good deal of impact going forward, and certainly one that we’re happy to have more of in our portfolio,” Fraser said.

Avison Young does have significant history with sustainable investments and planning. Previously, it was the lead consultant for the U.K. government on the country’s net-zero real estate plan, totalling about 1.8 billion square feet of assets.

“(Sustainable investments) are very attractive to Wall Street investors right now because I think there’s a growing consensus that the future is coming faster maybe than people thought,” said Erixon. “So these kinds of investments are very much in the sweet spot of where institutions want to make their long-term bets.”

AYIM is also currently assisting Lion in identifying showroom sites in the U.S.

Established in 2012, AYIM has over $690 million in assets under management across multi-family, industrial, retail and office properties.

Burdeniuk came to AY from the Canada Green Buildings Council, where she spent three years as the chief customer officer. Before that, she had spent 11 years as a principal at EcoAmmo, an Edmonton-based project management firm focusing on high-performance buildings she co-founded in 2006.

It manages almost $13 billion of plan assets and serves over 74,000 active members, retirees and survivors.

Nicholas Sokic Transportation EVs National Feb. 18 2022
Nicholas Sokic Business reporter
Nicholas Sokic is a freelance, Toronto-based journalist. He has covered a number of sectors, including business, finance, crypto, health, cannabis and culture. He graduated from Western University's Master of Media in Journalism and Communications program in 2019.