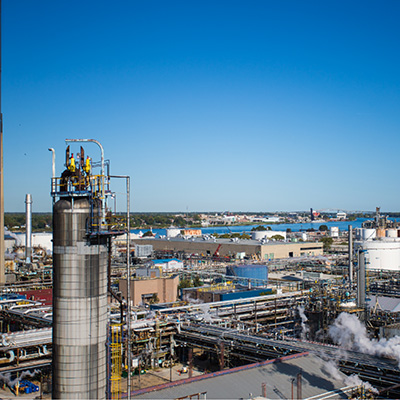 Upon completion, it is expected to be the largest behind-the-meter battery storage system in North America.

Enel X will build, own and operate the system, although a project timeline has yet to be confirmed. The company will also leverage its market expertise to provide accurate peak prediction services and enroll the battery storage system in the demand response program of Independent Electrical Systems Operator, the Crown corporation responsible for operating the electricity market in Ontario.

In a press release, Todd Smith, the Ontario Minister of Energy, noted that “investments in innovative battery storage systems like this one by Enel X and Imperial represent the future of smart industrial energy management.”

Conversations around this project began in summer 2020, growing out of a previous relationship between the two companies.

“Imperial Oil has been a customer of ours previously, both in North America as well as globally,” said Surya Panditi, Enel X’s head of North America. “So they know us, I believe they respect us for our technical capabilities, for our global footprint, and our ability to execute on projects.”

The battery storage system will enable Imperial to charge the battery at night when the availability of renewable energy on the grid is highest and draw on the battery during periods of peak demand, typically when natural gas would be used to augment electricity generation. According to Panditi, this will provide Imperial with millions in costs savings each year in addition to the environmental benefits.

This is partly because Ontario has a global adjustment (GA) charge for electrical usage. It is included in all electricity consumers’ monthly bills to provide adequate generating capacity and energy conservation programs throughout the province.

Customers with a peak demand greater than 500 kW can participate in the Industrial Conservation Initiative, which allows them to manage their GA costs by reducing need during peak periods.

For Imperial to save on GA, it’ll be using Enel X’s Distributed Energy Resources Optimization Software (DER.OS), which will switch between energy from the grid and energy from battery storage depending on peak demand times.

Beyond savings, though, Panditi sees another benefit to the project.

“It’s interesting that if you look around at the energy infrastructure, about 10 per cent of costs go toward meeting demand peaks that occur only one per cent of the time,” said Panditi. “If you think about that, that’s not a good return on investment, and it’s not good for the environment.”

Panditi believes these distributed energy resource projects help alleviate some financial and environmental concerns by having the system be locally operated.

The system is comprised of several shipping-container-sized battery blocks containing modules and power equipment. The entire system will fit into an area of roughly 150 x 200 feet. Company data states 1 MW of battery storage is approximately the size of one shipping container. So at 20 MW, it would be the size of about 20 shipping containers.

Other projects and future

Enel X has completed battery storage projects in the single-digit and 10-megawatt realms, including Ontario. The company’s first project in the province was a 1 MWh lithium-ion battery storage system for Algoma Orchards in 2018.

“We’re active in the province, and we’re interested in other projects. I think a unique capability that we brought is our ability to execute at this level of scale,” Panditi said. “I’m not aware of anyone else that’s building a project of this magnitude.”

Enel X estimates it is supporting over 100 jobs across the province.

Panditi said Enel X’s technology could also scale up for utility projects, which tend to be around 50 to 100 MW. For a company interested in utilizing the system, it comes down to whether or not it makes sense as an investment.

Enel X has grown its energy storage footprint in Ontario to more than 60 MW of capacity contracted and in operation with this new project, though some have yet to be announced.

In December, Enel X partnered with one of Canada’s largest multi-residential owners, the Killam Apartment REIT, to deliver 438 EV chargers to over 50 of its properties by this summer. As well, parent company Enel moved up its net-zero direct and indirect emissions targets last year from 2050 to 2040.

Enel X has about 4,500 business customers, spanning more than 35,000 sites and representing approximately $10.5 billion in energy spend under management. Enel X North America has approximately 4.7 GW of demand response capacity, over 70 battery storage projects that are operational and under contract, and more than 70,000 smart EV charging stations.

Canada ranks No. 2 in world for LEED-certified buildings