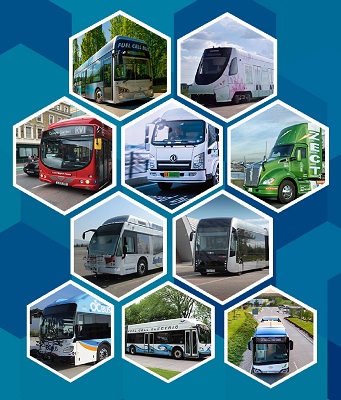 Ballard Power Systems’ (BLDP-T) fuel cell technology is putting its stamp on the transportation sector with the announcement of recent milestones in the bus and rail industries.

Earlier in March, Ballard also confirmed its partnership with Canadian Pacific (CP) (CP-T), with the rail company opting to use Ballard fuel cell modules for its hydrogen locomotive program.

“With this purchase from Ballard, a leader in the hydrogen fuel cell industry, CP further demonstrates its commitment to developing the next generation of locomotive – one that produces zero emissions,” CP president and CEO Keith Creel said in a release.

“How we power our trains matters to our customers, employees, shareholders and to the communities we operate in. This technology holds the possibility of eliminating emissions from freight train operations, which already represent the most efficient method of moving goods over land.”

More than 3,400 fuel cell electric buses, as well as a few trucks, were deployed over the past eight years, 80 per cent in China and the remainder in Europe and North America.

As Guy McAree, director of investor relations for Ballard, explained to Sustainable Biz Canada, the PEM fuel cell is a viable option for use in regional delivery vehicles.

“These kinds of applications typically return to a central hub where they can charge overnight,” said McAree, adding a lack of infrastructure can pose challenges for long-haul services, including passenger vehicles despite the technology being well-suited for such transportation modes.

McAree said the PEM has not been widely tested in Canada outside of the 2010 Vancouver Winter Olympics, where the company’s fuel cell technology was used to power the bus fleet that transported athletes during the games.

The fleet of 20 was eventually sold and the city replaced them with diesel-powered buses.

McAree, however, says the PEM “works very well in cold weather,” pointing to the fact buses have been tested in temperatures below -30 C.

Fuel cells, which produce electricity through a chemical reaction by converting hydrogen and oxygen into water, produce no exhaust emissions, releasing only water and heat.

They differ as a power source for vehicles from batteries because they require a continuous source of fuel and oxygen to sustain the chemical reaction. Fuel cells operate like a battery, but do not require recharging or store necessary chemicals within.

There are various types of fuel cells, which are classified by the type of electrolyte it uses. Ballard’s PEM fuel cell is slightly different as it utilizes a proton-conducting plastic for ion transport.

It also operates at a comparatively low temperature and, according to Ballard, holds the most promise for commercialization.

Ballard’s corporate headquarters is in Burnaby and it has additional offices in the U.S., China and Denmark.

Ballard will be delivering six of its 200-kW fuel cell modules to CP this year and will provide support with integration into the locomotives.

“In addition to Ballard’s work focused on powering commuter trains in Europe and urban trams in China, CP’s hydrogen locomotive program in North America underscores the strong fit for zero-emission fuel cells to power heavy- and medium-duty motive applications, including trains, for which it is otherwise difficult to abate emissions.”

Once the project is operational, CP plans to conduct rail service trials and qualification tests to determine if the technology is ready for the freight-rail sector.

CP first announced its hydrogen locomotive program in December 2020, with Creel stating in a release at the time the effort would be a “globally significant project” that would put CP at the leading edge of decarbonizing the freight transportation sector.

“CP will continue to focus on finding innovative solutions to transform our operations and adapt our business,” he said, “positioning CP and our industry as leaders for a sustainable future.”