At a time when embodied carbon from building construction is responsible for 10 per cent of all e... 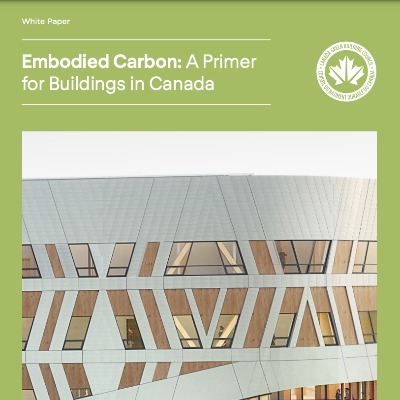 These were some of the top-level findings in the recently completed Canada Green Building Council (CaGBC) report Embodied Carbon: A Primer for Buildings, which calls for further action on embodied carbon in buildings.

Between 2022 and 2050, embodied carbon could represent over 90 per cent of a new building’s emissions. While concrete, steel and wood represent a significant portion of that embodied carbon, the materials also offer the biggest opportunity for cost reductions, along with insulation and aluminum.

“I would say that the big opportunities exist with wood and concrete right now,” Finn MacDonald, zero-carbon building program manager at the CaGBC, told SustainableBiz. “I mean, there are easy things you can do with concrete to reduce the embodied carbon. And the fact that it’s often made for you right on-site means you have a lot more control over what goes in the mix.

“It’s just a matter of urgency. They just haven’t been asking for supplementary cementitious material (SCM) to replace cement; the same thing with Portland limestone cement, it’s always been around for a long time.”

The mass-timber market has expanded the opportunities for wood construction, particularly in the five to 12-storey range, thanks to products such as cross-laminated timber (CLT) and glue-laminated timber (glulam).

Seen as an answer to reducing the construction industry’s embodied carbon issue, the benefit of the mass timber manufacturing process is that it’s not as energy-intensive and relies predominantly on electricity.

More than 500 under-construction or completed mass timber projects were undertaken between 2007 and 2019 for 16 million square feet. Among them is the Leaside Innovation Centre, a six-storey mass-timber project in Toronto.

However, developers and design teams are still getting comfortable with the idea of mass timber projects as a solution to embodied carbon. Its impact on the life cycle assessment has yet to be measured, which worries some in the industry who believe forests play a major role in sequestering carbon.

“A growing forest can absorb huge amounts of carbon, and it’s one of the major carbon sinks that our planet has left,” said Chris Magwood, director for Builders for Climate Action.

“If we’re making those forests smaller and congratulating ourselves for helping the climate because wood buildings are supposedly good for the environment, but we are reducing the natural ability of those forests to pull carbon out of the atmosphere, we’re doing the wrong thing.”

Companies like Canada’s Forest Trust, and others, are trying to rebuild ‘smart forests’ across Canada. However, the over-commercialization of Canada’s best sequestration pools and a lack of data to drive these decisions could end up causing more harm than good, he added.

“If we were accounting for all the climate impacts of forestry, we may find that encouraging people to use more wood could worsen the climate.”

Construction companies will have to turn their attention to the most common contaminants to make a real dent — concrete and steel.

Concrete is the second-most-consumed material in the world, surpassed only by water, according to the CaGBC report. Because cement serves as a binder in concrete, it’s responsible for 10-15 per cent of its material volume and approximately 88 per cent of its embodied carbon.

Canada produces 13 million tonnes of cement each year. Still, while SCMs are available, companies have been hesitant to rely on their use due to curing times and elements like foundations and columns that require stronger materials.

MacDonald said the U.S. already has incentivized programs that push builders to lower the carbon intensity of specific materials used in developments. Still, building code changes will ultimately be required.

“It’s going to have to end up in the building code by programs like ours that incentivize reductions in embodied carbon, (and) can help projects reach for lower embodied carbon,” he said. “We may see those come to Canada, which would be fantastic to have embodied carbon targets for individual materials.”

Meanwhile, steel has become an important sector for decarbonization as well. Many steel plants are undergoing modernization processes to use electric arc furnaces (EAF) as a production method.

ArcelorMittal and the Ontario government recently announced a $1.8-billion investment to transition away from blast oxygen furnaces at its Dofasco plant in Hamilton. The move will reduce annual CO2 emissions at its operations by approximately three million tonnes, which represents approximately 60 per cent of emissions, and upgrade its manufacturing process. The project is scheduled to be complete by 2028.

EAFs produce the heat needed using an electric arc, which allows the manufacturing process to take advantage of Canada’s clean electricity. EAFs can also produce steel from much higher proportions of scrap materials, which uses less energy and decreases the impact of extracting iron ore.

While there have been recent announcements of investments in EAF technology, the report calls for only 40 per cent of steel in Canada to be manufactured using recycled steel.

“To achieve a zero-carbon society by 2050, all sectors of the economy must decarbonize,” the report reads. “Reductions in embodied carbon are a part of this necessary work and must be pursued with the same urgency as reductions in operational emissions.”

While the construction industry is making strides, more reporting tools and data will be necessary to combat the impacts of embodied carbon, the CAGBC’s MacDonald said.

“I think the challenge is transparency and getting the data right now,” he said. “Some manufacturers are showing leadership, but there needs to be more data transparency (requested) as an industry.

“That’s why we’re encouraging all projects to ask for the data. If you look at many of our programs, they’re set up with this reporting requirement to get people quantifying embodied carbon to ask their suppliers those questions.”

EDITOR’S NOTE: This article was edited after publishing to remove erroneous information about
ArcelorMittal Dofasco. The firm is not building a new blast furnace at its Hamilton steel plant. SustainableBiz apologizes for the error.