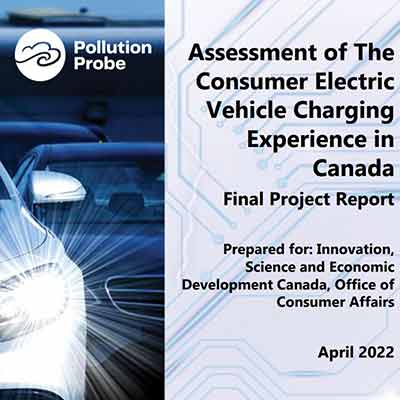 The majority of Canadian electric vehicle (EV) owners feel the public charging network is inadequate, meaning EV usage is not as convenient as it should be.

That is a key finding of a new national survey of EV owners from Pollution Probe, one of the first environmental non-governmental organizations in Canada.

The NGO pitched the Office of Consumer Affairs at Innovation, Science and Economic Development Canada for funding after looking at comparable studies around the world. The funding was provided by the Contributions Program for Non-profit Consumer and Voluntary Organizations.

“The main focus of the project was to talk to confirmed EV owners from every part of the country to get an in-depth sense of the strengths and the weaknesses of the existing public charging network,” said Derek May, Pollution Probe’s director of transportation.

“That was in order to help key stakeholder groups like government and industry and civil society prioritize areas for near-term action on accelerating the rollout of EV charging stations.”

Pollution Probe was founded in 1969 by a group of University of Toronto professors and students, initially to combat air pollution in Ontario. Since then, it has expanded to tackle a wide range of environmental issues in the country.

The results of the survey, drawn from 1,619 EV owners in every province, are placed in four categories: charging behaviour, network coverage satisfaction, network service satisfaction, and network payment systems.

The provinces with the most responses were Quebec, Ontario and B.C. with 44 per cent, 32 per cent and 10 per cent, respectively.

May said the biggest surprise in the survey was EV owners indicating a high degree of interest in smart charging and vehicle-to-grid (V2G) technology — charging which allows car batteries to give back to the power grid.

Seventy-nine per cent of respondents would be willing to participate in a smart charging program managed by their electrical utility company, while 62 per cent expressed interest in participating in a V2G program that offers financial compensation.

“Basically, they would allow utilities to reduce the rate of power going to an EV, or shift the timing of the charging session during peak periods of energy usage, typically between 7 a.m. and 9 a.m. in the morning or between 7 p.m. and 9 p.m.,” May explained. “Those are generally the peak periods of electricity in Canada.”

Such programs can help manage demands on the grid, while the EV owners would be able to essentially sell back their stored electricity to utility companies.

Less surprising for May is the need for more charging stations. Preferences are concentrated around DC fast-charging stations, with a strong interest in gas stations and highway rest stops as well as retail centres.

Those in high-rise buildings and multi-unit residential buildings (MURBs) had the highest demand for DC fast chargers. At the same time, 42 per cent of MURB respondents stated more than half of their charging needs are addressed using public infrastructure. MURB residents represent 33 per cent of Canada’s population.

“This is a huge untapped potential EV adopter demographic that is really constrained in terms of EV ownership, because they often don’t have any ability to charge at home,” May said. “They’re totally reliant in some cases on public charging infrastructure.”

There are issues with charging stations aside from accessibility.

Roughly half of respondents felt signage at and around public charging stations was inadequate, and that stations should be easier to find. Almost half were unsatisfied with longer-than-expected charging times due to inconsistent or lower-than-advertised charging power.

The future of EVs in Canada

Looking ahead to Canada’s 2035 goal of removing all diesel passenger vehicles from the road, May and Pollution Probe want to see a strategic deployment of DC fast charging stations at high-rise buildings and highway corridors to facilitate long-distance travel.

“In the next five years or so, we would like to see several times the number of existing public EV charging stations available,” May said. “But almost just as important as the number of stations that are available is the type of stations . . . in order to make EV ownership feasible for a lot of Canadian households.”

Pollution Probe has also received funding from Natural Resource Canada’s Zero Emission Vehicle Infrastructure Program (ZEVIP) to select recipients for new EV charging stations across the country. The NGO and its partner, FLO, expect to support between 500 and 600 new charging sites in the program, which will run until March 31, 2023.

According to Pollution Probe, its involvement with FLO has helped install over one per cent of all public charging stations in the country during the first three months of the year.

The 2022 federal budget includes $400 million to cover 50 per cent of the purchase and installation costs of new EV charging stations.

The 49 survey questions included in the report were formed from interviews with “more than 20 leading EV experts from both the public and private sectors.”