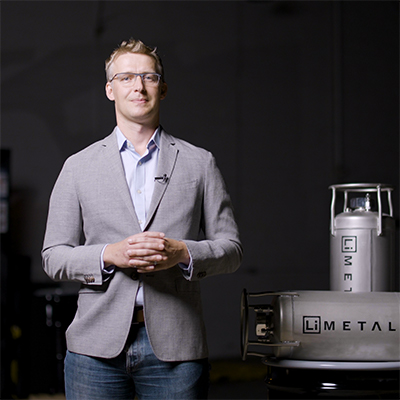 With almost two dozen patents in the pipeline involving lithium anode production, Li-Metal Corp. is positioning itself as a materials supplier for companies which will produce the batteries of the future.

Li-Metal (LIM) is developing and commercializing technology aimed at the successors to the lithium-ion battery. That includes solid state, liquid electrolyte, lithium sulphur batteries and more.

Anodes are one of two electrodes that make up a battery, including those in electric vehicles (EVs). In traditional anode production, chunks of lithium are flattened into a very thin foil. Li-Metal uses what it refers to as deposition technology, using lithium carbonate as its main input.

“Instead of squeezing the lithium down to a thin material, we actually build it up on a substrate,” said Maciej Jastrzebski, Li-Metal’s CEO and co-founder. “We can go from as thin as almost zero up to . . . the typical thickness is five, 10 and 20 microns of lithium on the surface of this substrate.”

This results in less lithium per metre of anode than in traditional production.

The product has the same storage capacity, but is more cost efficient and allows for more cells to be used in the battery. In short, this will make for “lighter EVs that can go farther.”

According to Jastrzebski, Li-Metal has about 22 patents in various stages of development and approval. He expects some of them to be granted within the next year.

Another difference in Li-Metal’s process is in the use of lithium carbonate as a feedstock instead of lithium chloride – which means no chlorine gas is produced as a byproduct.

This cleaner process is also more simple, and that is what gives Li-Metal its edge.

“Having our material in some of the first commercial EV next-generation batteries, that’s the animating vision for us,” Jastrzebski explained, “because we know that once we get there, the rest of the pieces start to fall into place.”

He also sees other applications for the technology including aviation, where increased energy density per pound of weight is paramount.

Li-Metal was born from a series of lunch meetings in late 2018 between Jastrzebski and Tim Johnston, the founder of the Mississauga-based lithium battery recycler Li-Cycle Holdings Corp.

In an April interview with SustainableBiz, Johnston called Li-Cycle’s recycling technology the “missing link in the battery supply chain.”

Both had previously worked at engineering consulting firm Hatch Ltd. Johnston left about a year before Jastrzebski to start Li-Cycle (LICY-N).

As Jastrzebski remembers, it was through Johnston’s work with battery companies, which all spoke about the need for a metallic lithium supply, that they both realized there would be demand for this material as new technologies emerge.

“I took an evenings and weekends type of effort for about three months, just building models and designing equipment just to get our heads around what this new process might look like,” Jastrzebski said.

Initially, there were issues in determining how to scale lithium anodes in foil form until the company’s proof-of-concept materials were well received by investors. By late 2020 that reception formed a significant part of Li-Metal’s decision to go public.

Li-Metal plans to develop full-scale anode plant, initially capable of producing between 100 to 300 MWh of anode materials per year, in 2023. However, a location has not yet been announced.

In January Li-Metal’s Rochester, N.Y. roll-to-roll pilot plant was commissioned and completed its first batch of lithium metal anode product. Were it to run 24/7, it’s capacity would be “tens of thousands of metres per annum,” according to Jastrzebski. The following month, it shipped its first batch of product.

The company predicts it will reach full commercial capacity by 2025, by which point it wants to be at a “gigwatt-plus scale” of production.

“The short term goal is to continue to feed samples into the marketplace in support of our battery development partners,” Jastrzebski said, “to demonstrate the production of metallic lithium from our process on an industrially relevant scale and to advance the development of our demo scale and production facilities.”

In February Li-Metal signed a development and commercialization agreement with Blue Solutions, a producer of solid-state lithium metal batteries. The aim is to use metallic lithium anodes in Blue Solutions’ Lithium-Metal-Polymer batteries. In April, it received a $1.9-million grant from Next Generation Manufacturing Canada, as part of the $5.1-million development project.

The agreement was born out of initial sampling of Li-Metal’s technology.

“What we’re doing is we’re working to develop an ultra-thin, metallic lithium anode that can then go into their next-generation battery technologies, their follow-up technologies and potentially commercially deployed battery cells as well,” Jastrzebski said.

Blue Solutions, a subsidiary of Bolloré SE, is based in France and in Montreal and will collaborate with Li-Metal on the project.