Concord Pacific, based in Vancouver, is one of Canada’s most recognized commercial and residentia... 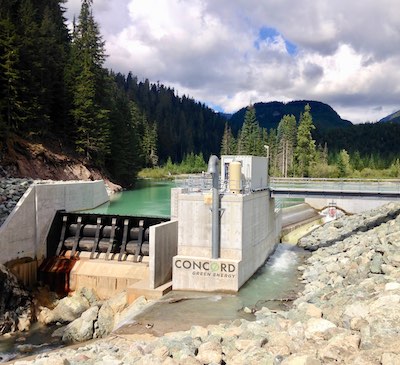 Concord Pacific, based in Vancouver, is one of Canada’s most recognized commercial and residential real estate developers. But increasingly in recent years, the company has also built a renewable energy portfolio which includes wind, hydroelectric and utility-scale solar assets.

“We’re certainly very interested to do more in the sector. What’s interesting is that over this time period the pension funds have sort of woken up. Lucky for us they woke up a little bit late to the attractiveness in the sector,” he said.

The first Concord Green Energy project was a wind project in Saskatchewan in conjunction with Algonquin Power. After that, it was introduced to a hydroelectricity facility just north of Vancouver (Skookum), which is a run-of-river project.

“We tend to think about hydroelectric as sort of the massive, big reservoir dams that BC Hydro built. Those things are good because you build a big reservoir and then you let the water go over the dam or through the turbines when you need it. Run-of-river does not entail a reservoir dam. You’re only making power when the water’s in the river,” said McCracken.

“Some people say you’re not disturbing the environment to the extent that you do in a reservoir dam. It’s better for the environment. (But) it’s not as good for generating electricity because you just get the power when the water’s in the river, as opposed to fine-tuning and getting the power when you want it.”

Concord has also been involved in several solar farms in Ontario. Today it has eight such properties – referred to as utility-scale as each farm is generating about 10 megawatts.

It has added some wind farms in Ontario and is now under construction with some solar farms in Alberta. The company is also pursuing permits for a very large run-of-river hydro facility in Northern Alberta.

“Going back 14, 15 years ago, we just saw it as a sector that was a good long-term investment. We anticipated that energy was simply going to become more and more expensive over time and I guess we had an anticipation that the price of oil was going to keep climbing,” said McCracken.

“At the outset, it was seen as a good place to deploy capital, good long-term prospects. As electricity, it’s clean.

“You might have said, ‘well why did we not consider investing in oil and gas back then?’ But that just didn’t catch our interest. At the outset, it was just good long-term prospects from a financial perspective and then as things have carried on we certainly feel pretty good about the environmental benefits of being renewable.”

Concord created Concord Green Energy to explore and support future communities with a variety of zero-carbon energy-producing projects. The company said its current green energy projects can power more than twice the needs of all its communities.

Recently, it was announced that GP Joule North America, a leader in utility-scale engineering, procurement, and construction with proprietary racking solutions, broke ground on a 106-megawatt solar photovoltaic (PV) portfolio for Concord Pacific near Lethbridge, Alta.

It’s Concord’s first development of a solar PV site and includes three projects, each 35 megawatts in size. It is scheduled to be completed about March 2022.

“GP Joule was the logical choice as they had recent experience in building merchant plants and furthering utility-scale projects during the pandemic,” said Terry Hui, president and CEO of Concord Pacific, in a statement. “We are also pleased to be working with the Athabasca Chipewyan First Nation as we expand our portfolio in Alberta.”

Looking to the future, Concord Pacific has more than 500 megawatts of renewable energy projects in its pipeline.

Ahmar Khan Energy Renewable Energy Toronto / GTA May. 4 2021
M
Mario Toneguzzi Business reporter
Mario Toneguzzi, based in Calgary has 37 years of experience as a daily newspaper writer, columnist and editor. He worked for 35 years at the Calgary Herald covering sports, crime, politics, health, city and breaking news, and business. For 12 years as a business writer, his main beats were commercial and residential real estate, retail, small business and general economic news. He nows works on his own as a freelance writer and consultant in communications and media relations/training.