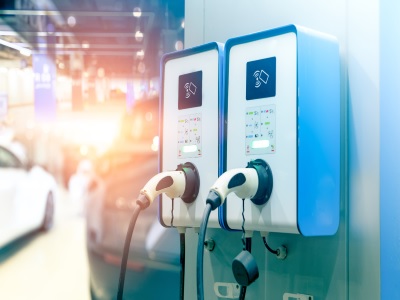 Kevin Lisso, founder and CEO of EnerSavings, said he has seen an enormous leap in EV acceptance in Canada, but discovered condos and apartments are struggling to update their energy infrastructure for the vehicles.

Lisso said this risks slowing the pace of the transition.

He hopes to address this issue with the company’s Energy Management System (EMS), an intelligent subscription plan which installs EV charger infrastructure for people in multiresidential buildings and is adaptable to increasing demand.

EMS originally emerged to address demand from condo and building boards for two or three EV chargers in the Vancouver and wider British Columbia markets.

“The obvious solution,” he said, was installing a charging station in a parking stall by running a wire from the electric room to the garage, but that could require up to 200 feet of wire. Installations could cost $7,000 to $10,000 per charger.

It was an “eye-opener,” as the need for two or three EV chargers ballooned to five to seven. On top of residents waiting six to 10 months for their EVs, Lisso asked himself how the market would look in three to five years when half of building residents would need chargers.

“A lot of these buildings that were built 20 to 30 years ago, when they built it for capacity with a 25 per cent buffer of what they thought they would need for electricity – they didn’t have EV cars in mind,” he said. “Consequentially, there is not enough capacity to service those 200 people that live in that building. In fact, you might only be able to service 20 or 30 or 50.”

The process of upgrading the building capacity could easily run into the hundreds of thousands of dollars. With EMS, EnerSavings hopes to significantly reduce that cost.

“What it does is put everybody on a level playing field.”

EMS matches six to eight EV chargers onto one circuit, rather than running one wire through the electric room to the garage. Lisso said splitter boxes comprise the EV charging infrastructure in a ‘backbone’ that takes all 200 EV charger spots and connects them into one master system.

The EV chargers are sourced from Korean electronics company LG.

Lisso said EMS overcomes the capacity issue facing large residential buildings to prevent brownouts and overloading. EMS evenly distributes the power from a circuit across the EV chargers. Though it will take longer than having an individual charger, Lisso said most drivers will be charging their EV overnight, so waiting seven to eight hours is rarely a problem.

“Instead of one system, one charger, one wire and a 40-amp breaker, now we can tie in six into that,” he said.

It adjusts consumption based on peak usage, tracks usage and supports app-based controls and reporting. If an EV with a high charge is simultaneously charging alongside an EV with a lower charge, EMS will compensate by distributing more power to the EV with less charge.

EMS draws power from the grid using the building’s power source. EMS monitoring in the building figures out the kilowatt-hours spent on the EV charge and sends a bill, which the resident pays back to the condo corporation.

Navi Salaria, co-founder and COO of EnerSavings, said each kilowatt-hour of charging offsets approximately six to seven pounds of GHG emissions. Though EnerSavings cannot ensure the energy used to charge the EVs is clean, Salaria noted Canada’s grid is largely powered by renewables or clean energy.

The company currently has 200 high-rise building customers and about 3,200 chargers across Canada.

Customers pay for EMS via a subscription plan for $99 a month. It encompasses installation, infrastructure and charging on a pay-as-you-go system on a three-year commitment.

Compared to gas-powered cars, Lisso argued EMS is much more affordable. He said refueling the average car with today’s gasoline prices will cost the owner between $300 to $500 a month. But the average he sees across its building clients is $30 per month to charge an EV. He estimates that a 400-km charge would cost around $7.

The millennial demographic particularly “loves” the subscription model, he added.

EnerSavings decided on a three-year commitment because the average condo owner stays for 2.8 years according to the firm’s research.

Boosted by incentives like rebates for EV chargers and vehicles, and a surge in EV adoption and interest, EnerSavings is looking to spread across Canada. It currently services B.C. and Ontario, and is expanding into Quebec and Alberta.

While property managers and condo owners in Vancouver are considering installing EV chargers at every parking stall, the same cannot be said of Ontario, Lisso observed. In Ontario, the province is still in a “let’s buy 10 chargers and put two in visitors’ (parking),” mindset, but the light switch will go on and the adoption rate will skyrocket,” he said.

Lisso said EnerSavings is a $20 million-a-year business with the aim of reaching $50 to $100 million. It currently serves clients like Canada Post, IBM, Avison Young and Ontario Power Generation.

While he admits EnerSavings cannot control interest rates or inflation that could harm business, Lisso is bullish about the industry. The federal carbon tax is boosting green initiatives like long-term loans that are helping the company, he noted.

The long-time green industry veteran said the exponential adoption of electric vehicles in Canada cannot be ignored, and will “open up a world” in which affordable EVs and charging infrastructure are a part of the Canadian landscape.

dcbel wants V2G technology in homes around the world

Nicholas Sokic Transportation Wyse Meter Solutions National Aug. 26 2022
Tyler Choi Business editor, Sustainable Biz Canada
Tyler Choi is a journalist based in the Toronto area. He has covered a wide range of sectors ranging from science and technology, the environment, business, government policy and crime, to finance. Among the many people he has interviewed, his favourite was an Ig Nobel Prize winner.