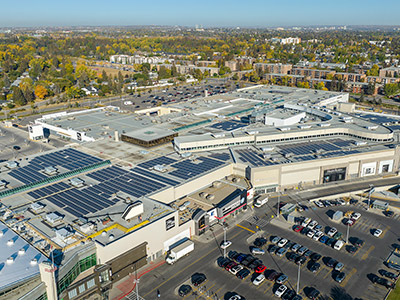 Almost 2,000 solar photovoltaic panels were installed on the roof of the Centre across 53,000 square feet, adding up to 800 kW. Initially announced in early 2021 with funding from Natural Resources Canada and Alberta Innovates, the panels were fully installed in March of this year.

The panels will enable the mall to generate its own electricity, and also export it back onto the grid and receive credits on its bill for the energy. This two-way power flow is already established in much of Calgary’s grid network, but wasn’t possible in high-density areas such as malls or downtown areas. That’s because of the way in which those areas get their power from an interconnected web of transformers, known as a secondary network.

“It’s a complex, highly reliable system that you see in a lot of downtown areas in larger cities,” said Jana Mosley, ENMAX Power’s president. “Calgary has one of the larger secondary networks, and we wanted to see if we could enable two way power flow so that we could give our urban customers more choice in how they generate electricity as we’re all working towards a lower carbon future.”

Headquartered in Calgary, ENMAX operates 1,522 MW of power and offers a range of electricity, natural gas and energy services to approximately 700,000 residential, commercial and industrial customers across Alberta and more than 162,000 customers in Maine. While the company is private, the City of Calgary is its sole shareholder.

According to Mosley, ENMAX was likely out soliciting for a partnership to test the technology. While there were a few different opportunities the company had progressed with, CF ended up being the preferred partner with the right network connection. From CF’s end, the project aligned with its climate goals.

Wholly owned by the Ontario Teachers’ Pension Plan, CF manages over $35 billion in assets across the Americas and the U.K., with further expansion planned into Europe and Asia. Its Canadian assets total 68 properties.

In 2021, it was ranked first in the reporting category by the Global Real Estate Sustainability Benchmark.

While Mosley didn’t provide specific figures regarding potential greenhouse gas emissions reductions that may result from implementing the panels, part of the ongoing monitoring of the project throughout the rest of the year will take it into consideration.

“This pilot was really all about seeing (if) could we solve this technical solution, and become the first utility in Canada to be able to enable to a two-way power flow, which we successfully have done. This wasn’t so much about the volume,” Mosley explained.

“Now that we have achieved this from a technical perspective, we will be looking at how we partner with different customers and businesses to enable scale, which certainly will benefit the environment through greenhouse gas reductions.”

Two-way power in the future

Mosley mentioned the possibility of further collaboration with CF, given their presence across Canada and the U.S. There was also thought given to enabling the technology in cities that also have secondary networks like Calgary’s. Some examples Mosley mentioned include Toronto, Edmonton, Saskatoon as well as New York City, San Francisco, Portland and Seattle.

“So I think that you will see us share this technology with all of the utilities who are interested in North America,” she said. “They’re going to be able to leverage it for the benefit of their customers as well.”

As ENMAX monitors the project over the rest of the year, it will watch for any challenges to the system to gather enough data over a longer timeframe. It will also look into any limitations around the size of the electricity exports.