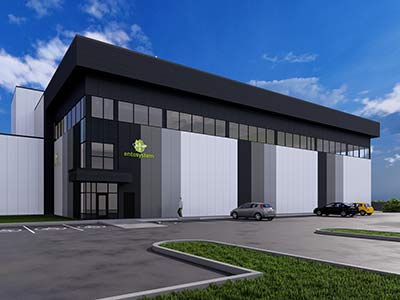 Farming technology company Entosystem has secured funding to build a facility in Drummondville, Que. that will recycle organic and food waste in a circular economy process which will turn fly larvae into a protein flour and fertilizer.

Through over $60 million in public and private investments, the plant will take discarded matter from Quebec’s agri-food industry — from farms to grocery stores — and use it to feed the black soldier fly larvae.

Once well fed, the larvae will be dried and ground into a protein flour used to feed domestic and farm animals. The same process can produce a fertilizer approved for organic farming.

The nutritional profile of the flies (45 per cent protein, as well as being a source of calcium and omegas) allows Entosystem to replace soy protein and fish in chicken feeds. It can also be used as dog and cat food.

Entosystem’s website states almost 40 per cent of food in Canada ends up as waste.

“Canada is one of the worst countries in terms of waste,” said Cédric Provost, Entosystem’s president and co-founder.

Canada also acquires a significant share of its fertilizer from Russia – which could become an issue based on current world events. Eastern Canada imports as much as 60 per cent of the nitrogen fertilizer used in the manufacture of fertilizer blends from Russia.

The Entosystem factory will receive 250 tonnes of food daily, which will be consumed by the insects over a six-day cycle. According to Provost, the flies are well suited to the venture because they reproduce quickly and contain a very high percentage of protein.

They are native to the tropical areas of the Americas, but have spread to every continent.

The insect breeding process in the over-100,000-square-foot plant will be fully automated. Entosystem states when construction is complete, the facility will be able to recycle 90,000 tons of organic matter annually in order to produce 5,000 tons of protein larvae as well as 15,000 tons of fertilizer.

A portion of the funding will come from agri-food byproduct recycler Sanimax Industries Inc., which is a partner in the venture. Other companies and organizations are providing loans to make up the rest of the $60 million, including Desjardins Group which invested $13.5 million. Other partners include Export Development Canada, the Business Development Bank of Canada and RECYC-QUÉBEC.

According to an independent study commissioned by Entosystem, the project will reduce GHG emissions by 85 per cent per year when compared to allowing the material to be wasted.

“The use of insects to speed up the process of composting food waste is a promising solution for the environment. By recovering products intended for landfill, Entosystem creates value-added products, generates a zero-waste circular economy and contributes to the achievement of our climate targets,” said minister of agriculture and agri-food Marie-Claude Bibeau in a statement on the new facility.

Provost said the company has grown exponentially over the last three years, from only a handful to around 35 employees. The new facility will bring that total to 103.

The current schedule is to finish the plant’s construction by late 2022 or early 2023.

Development of the protein

Entosystem, based in Sherbrooke, Que., began research and development on its larvae protein in 2016. By 2018, the company had moved to a 22,000-square-foot industrial plant and began commercialization.

“We spent maybe a year just understanding everything, finding customers and finding the market,” Provost said, “establishing what the business model is going to be.”

Provost said the choice for protein was between the black flies, crickets and mealworms. The latter two are approved for human consumption, but because Entosystem’s product would also be used as pet food, the company chose the flies. As a bonus for any pet consumption, the protein is hypoallergenic.

Thanks to their ability to feed on “pretty much anything,” Provost calls the black flies “one of the best insects to convert waste into protein.” There is still some discretion in what waste is used, however.

“Since we’re feeding it to animals, we need to have some certainty of the quality of the feedstock. So we really look at grocery stores already known in big industries,” Provost said. “Let’s say someone’s making french fries. Well, you’ve got potato peels, you’ve got bad potatoes and you’ve got fries that were on the floor. That’s the kind of waste (we would use).”

The company has already presented the product to customers in the chicken industry, as well as those producing dog and cat treats. When the new plant enters production, it aims to expand further in Quebec, the rest of Canada and the U.S., though Provost declined to share specifics.

“I would say the environment is really a key advantage (we have) on other protein for now,” Provost said. “I think people really want to make better choice(s) for the environment.”