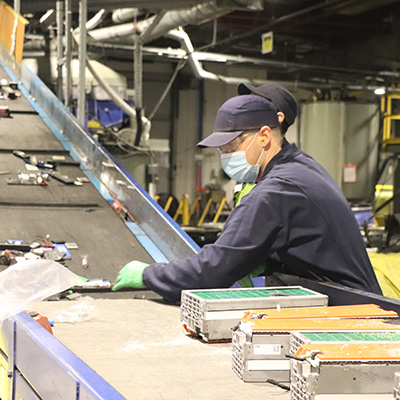 Li-Cycle Holdings Corp. has announced a strategic partnership with commodity trading and mining company Glencore plc, including a $200-million investment by Glencore expected to close in the third quarter of 2022.

“Once completed, the Glencore investment, together with the previously announced investments by LG Chem, Ltd. and LG Energy Solution, Ltd. and the investment made by an affiliate of Koch Strategic Platforms, will bring the total new capital we have raised since our August, 2021 NYSE listing from key strategic global players in the battery material industry to $350 million,” said Debbie Simpson, Li-Cycle’s CFO, in a prepared statement.

The partnership also involves a global agreement under which Glencore (GLNCY) will supply manufacturing scrap and end-of-life lithium-ion batteries to Li-Cycle (LICY-N) for recycling, and in turn receive recycled commodities. This includes:

– procuring feedstock for Li-Cycle Spoke facilities and “black mass” (a byproduct of battery production and recycling) for Li-Cycle’s Hub facilities;

– off-take of by-products from Li-Cycle’s Spokes and Hubs; and

– supply of sulfuric acid, one of the key input reagents for Li-Cycle’s Hubs.

Glencore, based in Baar, Switzerland, will also earn a position on Li-Cycle’s board, to which it will nominate head of recycling Kunal Sinha.

Glencore’s Canadian headquarters are in Toronto. In August 2021, the company increased its medium-term emission reduction target to a 50 per cent by 2035 (from 2019 levels) and introduced a new short-term target of a 15 per cent reduction by 2026.

Founded in 2016, Li-Cycle’s patented Spoke and Hub Technology can recycle all types of lithium batteries. It can also utilize the scrap discarded during battery production.

“Spoke” facilities collect and break down the waste batteries into recyclable elements. The Hub then takes the byproduct and turns it into reusable materials.

“As the world continues to electrify, the need for environmentally and economically sustainable recycling solutions will only continue to accelerate,” said Tim Johnston, Li-Cycle’s co-founder and executive chairman, in an email interview with SustainableBiz in April.

“In line with the rapidly growing demand for lithium-ion battery recycling, our goal is to continue to grow in lockstep with our customers.”

Li-Cycle, based in Mississauga, plans to scale up its operations to recycle 65,000 tonnes of lithium-ion batteries by the end of 2023.

Nicholas Sokic Transportation EVs National May. 2 2022
Nicholas Sokic Business reporter
Nicholas Sokic is a freelance, Toronto-based journalist. He has covered a number of sectors, including business, finance, crypto, health, cannabis and culture. He graduated from Western University's Master of Media in Journalism and Communications program in 2019.