Convinced that marine shipping is the greenest form of transportation, Hamilton Container Termina... 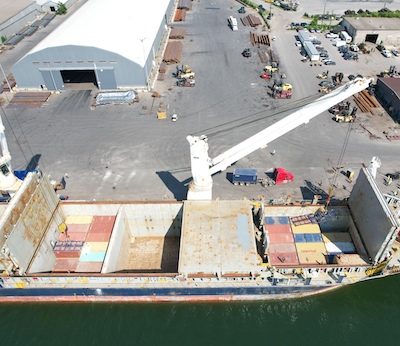 Loading the M/V Sedna Desgagnés, which has embarked on its first marine shipment of containers from Hamilton to the Port of Montreal. (Courtesy Hamilton-Oshawa Port Authority)

Convinced that marine shipping is the greenest form of transportation, Hamilton Container Terminal and the Hamilton-Oshawa Port Authority (HOPA) have launched a new container ship service between Hamilton and the Port of Montreal.

The M/V Sedna Desgagnés set sail from Hamilton to Montreal on June 10 with about 300 containers, in the first voyage of what could become a weekly service in a few years.

Using the marine route to move containers “is a much more sustainable approach to how we handle inland transportation,” says HOPA Port president and CEO Ian Hamilton.

The service, which was launched by Hamilton Container Terminal, will help alleviate road congestion around the Greater Toronto and Hamilton Area (GTHA) and could reduce some logistics costs and create additional supply chain resilience, says Hamilton.

“During COVID, we recognized how vulnerable we were when supply chains went down,” Hamilton says. “The more alternatives you have, the more redundancies you have built into your supply chain, the more resilient you can be.”

With the GTHA representing North America’s fourth-largest economy and population base, “we have to find different ways of moving goods around rather than just putting more trucks on the road and trying to build more roads,” Hamilton says.

Hamilton says the marine service could reduce the number of last-mile kilometres trucks need to travel. Currently, more than 10,000 trucks daily move goods between the GTHA and Montreal.

As a general rule, “a truck would probably emit, per kilometre, 300 per cent more than a (marine) vessel in terms of greenhouse gas emissions”. One ship can take 946 trucks off the road.

There was an attempt more than a decade ago to launch a similar service but the increased focus on climate change means the importance of sustainable transportation alternatives has grown exponentially. A shortage of truckers also adds to the new service’s viability, he says.

Although city-to-city ‘short sea shipping’ on the Great Lakes has long been discussed, “the stars have aligned” to make the new service viable, Hamilton says. “The timing couldn’t be better.”

In a statement, HCT president Amandeep Kaloti said a Great Lakes container service has been the organization’s goal since it set up shop in Hamilton six years ago.

In the maiden voyage, the largest commodity shipped was secondary steel destined for India’s steelmaking market. However, “as the service proves itself, we’ll see a lot more use in fast-moving consumer goods,” Hamilton says. “We certainly see an opportunity working with alcohol.”

For example, the LCBO, Ontario’s liquor board, “has a real focus on sustainability” and “we’re right at the doorstep of the wineries in Niagara that import quite a bit of wine for blending.”

Heavier products like steel, chemicals and liquid commodities like wine would benefit greatly by marine shipping. “Not only does the increased weight cause additional costs when you move it by ground transportation, but it also creates more wear and tear on our highways.”

While the marine trip between Hamilton and Montreal takes two to three days versus about eight hours by truck, “it’s time-definite, so you don’t have to face traffic issues,” Hamilton says. “Logistics managers and supply chain managers are as much focused on time-definite as they are on velocity” and value having products arrive when they’re supposed to arrive.

A second Hamilton-Montreal voyage is planned in July and 20 sailings are planned next year. Plans call for the venture to move to a scheduled round-trip service in 2023 that can operate at least nine months a year, as the St. Lawrence Seaway Management Corp. continues to try to extend the shipping season.

Port of Montreal planning to grow its marine assets

The Port of Montreal says it has taken several steps in recent years that have reduced its greenhouse gas emissions by 25 per cent since 2007. Earlier this month, it signed an agreement with Greenfield Global, which specializes in the production of biofuels, to identify, conceive and implement green energy solutions such as green hydrogen, ethanol and methanol.

Back in Hamilton, Ian Hamilton notes while there has been a growing focus on sustainability and finding more environmentally-conscious ways of shipping, “they can’t be cost-prohibitive. We need to be at least competitive and I think there’s a real potential to do that.”

He adds Canada has not taken advantage of its marine shipping capabilities and there is an opportunity to increase the number of ships in the system.

“Look at all the other ground transportation modes – rail and trucking – they’re busting at the seams. They just don’t have the capacity to deal with the continuing and growing demand for goods and the transportation of those goods. It just makes total sense to start to look at our marine assets and start to grow those assets.”

Derek Clouthier Transportation Electric vehicles Metro Vancouver Apr. 6 2021
D
Danny Kucharsky Business reporter
Danny is a multiple award-winning journalist based in Montreal, who has written for about 75 magazines and newspapers in Canada and the U.S. His credits include The Globe and Mail, Montreal Gazette, Maclean's, Chicago Tribune and a wide variety of business, specialized trade and medical magazines. Danny was also the Montreal correspondent for Marketing Magazine for several years.