Purolator became the first Canadian courier out of the gate to launch nationally fully electric c... 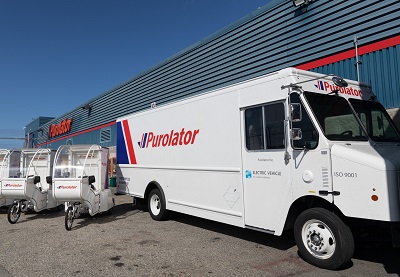 Purolator became the first Canadian courier out of the gate to launch nationally fully electric curbside delivery vehicles in Vancouver.

The effort is part of Purolator’s overall goal of reducing traffic noise and greenhouse gas (GHG) emissions during a time when the company has seen residential delivery demand rise due to COVID-19.

“At Purolator, we’re committed to adapting intelligently and providing sustainable solutions for the unique challenges of urban growth, the rise of e-commerce and unprecedented volumes of home deliveries,” John Ferguson, president and CEO for Purolator, said in a release.

“Transforming our infrastructure and fleet is a key focus area of our growth and innovation strategy, and the cornerstone of our commitment to reduce our environmental footprint.”

The company said the new all-electric Vancouver fleet will reduce GHG emissions by 24 metric tonnes each year per vehicle.

As Matt O’Leary, Motiv chairman and CEO, explained to Sustainable Biz Canada in an email, the EPIC is 100 per cent battery powered, using three lithium-ion battery packs for a total of 127 kWh.

“The range on a single charge is up to 169 km at a charge time of eight hours,” said O’Leary. “Purolator and last-mile delivery fleets are ideal candidates for electrification with their fixed service routes which bring the vehicles to the depot at the end of a shift to charge overnight.”

Motiv, which supplied its technology for the electric trucks and not the e-bikes, plans to provide various configurations to Purolator based on the courier’s needs.

Though this is Motiv’s first deployment in Canada, the California-based, all-electric chassis manufacturer has been adding its technology to vehicles south of the border for several years.

And the company is anticipating further growth in Canada.

“We anticipate more deployments with Purolator and are excited to deploy with another large parcel fleet in Canada later this year,” said O’Leary. “We have already established a local support team in Canada and expect to partner with a Canadian-based group to further support our expansion into this vast market.”

Motiv’s EPIC comes in a variety of platforms – F-59, F-53, and E-450 – enabling fleets to choose from multiple configurations, including step vans, box and work trucks, shuttle and school buses, and trolleys.

“Although cold temperatures require consideration for all electric vehicles,” said O’Leary, “we work with our partners and customers to offer solutions that allow our technology to perform well in many climates.”

O’Leary pointed to successful deployments in Michigan in January, as well as New York, both cold-weather climates that revealed “very good results.”

“We anticipate deploying in Quebec in 2021 to 2022,” he added, while not divulging the name of the company.

The company, which is headquartered in Mississauga, has been adding electric vehicles to its fleet since partnering with Unicell Ltd., in 2014 to introduce the Quicksider prototype.

In 2018, Purolator collaborated with Cummins Inc., to develop a powertrain to replace the combustion engine.

The courier still operates gas-powered vehicles, though it says it actively looks for solutions to improve efficiency, including driver training and eco-driving practices like no idling and progressive shifting.

Motiv’s electric vehicle technology is California Air Resource Board-certified and the company has delivered 120 vehicles across North America which have travelled more than 1.6 million kilometres.

Founded in 2009, Motiv says its technology offers fleets up to 85 per cent operations and maintenance cost savings, as well as drivers with a healthier and more comfortable driving experience.

Before joining Motiv, O’Leary worked for the Ford Motor Company for 38 years and was the vehicle line director for North America trucks, SUVs and commercial vehicles.

He was also the product development director for Ford South America operations, leading the deployment of the EcoSport and Ka global vehicles.