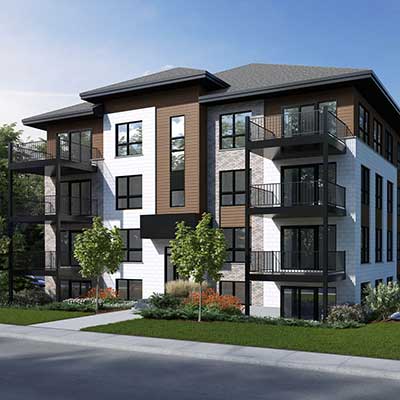 Habitations Mont-Royal is building what will become Canada’s largest LEED-certified neighbourhood in the City of Longueuil.

About 800 homes in the le Faubourg Cousineau suburban eco-neighbourhood project have been constructed. A coming fourth phase will increase the project to a total of 3,000 housing units, all of which will be seeking LEED certification.

The fourth phase will include the construction of housing for families, seniors and single people in a variety of styles, including single-storey and low-rise.

“Le Faubourg Cousineau demonstrates that there is a strong demand for LEED-certified housing and that potential homeowners are looking for housing that meets their desire for a more sustainable lifestyle,” said Mark Hutchinson, vice-president of the Canada Green Building Council (CaGBC) in a statement.

“LEED’s success is due to the partnership and support of those committed to advancing green building and this project is a significant step forward.”

The neighbourhood itself offers amenities and services which appeal to multi-generational buyers. Le Faubourg Cousineau is near two schools, sports fields and several bike paths that link to the longest pathway in Quebec.

For Emmanuel Cosgrove, the director of Évaluations Écohabitation, which conducts evaluations for LEED certifications in Quebec, the project is relatively straightforward. Having a single developer streamlines the process, which he considers a rare situation in such projects across Canada.

“This type of development is very common in the U.S.,” where it’s more common for one large builder to undertake a major project, Cosgrove said. “I mean, they’re big builders. The Canadian landscape of home builders is quite different, where it’s more smaller operations.

“It’s not large corporations that manage development projects. So this is something that I’m sure other developers would love to do.”

The CaGBC site lists the project as seeking a LEED Silver certification. The le Faubourg Cousineau website boasts that its buildings save, on average, 10 per cent in energy and 32 per cent in water usage.

In line with the province’s goal of having 1.2 million electric (EV) vehicles on the road by 2030, each garage will come pre-installed with EV charging stations.

Cosgrove also praised the affordability of the project, dispelling preconceived notions of green projects being upper-end and inaccessible to first-time home buyers. He specifically cited a CMHC rebate for buyers of LEED-certified homes.

Écohabitation is in charge of resource management, evaluations, inspections and energy modelling on projects where it partners with developers. It then submits the results to the CaGBC. Cosgrove is hopeful this sort of standard can continue, particularly with social housing units.

“We have a lot of take up with social housing projects with LEED. For many decades Canadian social housing has been we could consider it subpar,” said Cosgrove. “Now with all the national housing strategy of the federal government, social housing is all of a sudden going to be amongst the most energy efficient and durable housing out there.”

The ROI on green homes is better

That upward momentum isn’t limited to just social housing. Cosgrove expects green housing investments to increase across the board.

“I’d say now that investors are more and more interested in greening their portfolios. Not only because it’s the right thing to do, but mostly because its return on investment is better,” he said. “Green developments generally sell quicker. They sell at a slight premium and they just make more sense.”

An Écohabitation study from September revealed although ecologically-certified homes make up just 1.5 per cent of Quebec’s residential stock, 69 per cent of real estate brokers believe a certified ecological house has an added value of five to 15 per cent. Further, the real additional costs are estimated between two and five per cent.

Leadership in Energy and Environmental Design (LEED) is the most widely-used green building rating system in the world, available for virtually all building, community, and home-project types.

Since 2004, LEED has certified over 4,350 buildings in Canada and registered over 8,500 – giving Canada the second-highest number of LEED projects in the world. The five Canadian provinces with the most LEED-certified buildings are Quebec, British Columbia, Alberta, Nova Scotia and Manitoba.

Écohabitation was formed in 2011, and through 2019 had offset 94 tonnes of greenhouse gas emissions from its services.

Mario Toneguzzi Energy Net-zero National Oct. 6 2021
Nicholas Sokic Business reporter
Nicholas Sokic is a freelance, Toronto-based journalist. He has covered a number of sectors, including business, finance, crypto, health, cannabis and culture. He graduated from Western University's Master of Media in Journalism and Communications program in 2019.