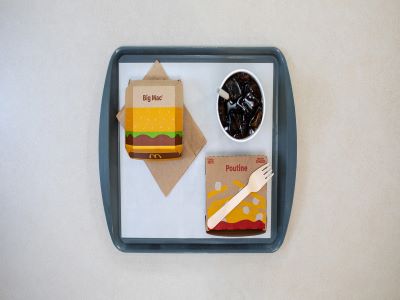 McDonald’s is making an effort to reduce its waste and climate impact starting from the utensils and energy it sources. (Courtesy McDonald’s)

“We know people in Canada are looking for us and the broader food industry to take action on issues that matter and act responsibly,” said Gemma Pryor, senior director of the McDonald’s Canada Impact Team in an email response to questions from SustainableBiz. “We have the ability and responsibility to use our scale and scope to tackle both small and big challenges facing our communities locally and globally.”

In 2022, McDonald’s Canada embarked on a series of moves to reduce waste from its food and beverage packaging.

In May, it completed a paper fibre reduction initiative for McCafé hot cups which eliminated nearly 700 tonnes of paper fibre in Canada and began a six-month pilot project to promote reusable cups and recycling single-use cups. Two months later, McDonald’s Canada revived the reusable travel mug policy to enable customers to reuse their travel mugs for tea and coffee.

It also added its first electric vehicles to its distribution fleet in April with supply-chain distribution partner Martin Brower. The zero-tail-pipe-emission Volvo VNR Electric Class 8 tractor is being trialed in the Montreal area.

The transition away from plastic is also affecting utensils. In late 2021, McDonald’s Canada eliminated plastic cutlery, stir sticks and straws from its restaurants, which the company claims has phased out about 700 tonnes of plastic from Canada annually – 370 tonnes from plastic straws alone.

When asked about the difficulty of abolishing single-use plastics from its restaurants, Pryor wrote: “When you’re a business of our size, even small changes can have a big impact, but we recognize we couldn’t change our system overnight. As we work to drive change in this area, we go through various testing and learning processes to help us understand what achieving our ambitions looks like for our business operationally.”

One example is the testing of a reusable and washable McFlurry mixing spindle in four restaurants in the Greater Toronto Area. Rather than a plastic spindle that was the standard since the 1990s, customers received a wooden spoon. McDonald’s Canada expects to eliminate approximately 168 tonnes of plastic resins annually after sorting through the results of the test, for consideration across Canada.

These are elements of a broad sustainability program, as McDonald’s joins other fast food industry players in the quest to minimize their environmental impact.

In 2018, McDonald’s pledged to achieve net-zero GHG emissions by 2050 across its global operations, inclusive of its Scope 1, 2 and 3 emissions, verified by the Science Based Targets initiative (SBTi).

That was accompanied by a goal to reduce its restaurant and office GHG emissions by 36 per cent by the end of 2030, from a 2015 base year. It aims to achieve these goals with renewable energy sourcing, working with its supply-chain and reductions in waste.

McDonald’s does not have published figures for the GHG emissions of its Canada-specific operations.

Pryor also addressed McDonald’s sourcing of beef. The cattle that end up becoming hamburgers or produce milk for cheese and butter are responsible for 62 per cent of the GHG emissions from the livestock sector, which the Food and Agriculture Organization estimates contributes around 14 per cent of global warming.

McDonald’s has been accused of being less-than-successful with its attempt to source more sustainable beef, which has been implicated as a major source of its GHG emissions, most notably the highly potent methane. Bloomberg News reported McDonald’s sustainable sourcing remains comparatively small and faces systemic issues such as resistance from cattle farmers to how the cow carcass is processed.

In Canada, beef production is responsible for 2.4 per cent of the country’s emissions, according to the Canadian Cattle Association.

Pryor said at least 30 per cent of the beef used in McDonald’s Quarter Pounder burgers is from farms and ranches certified to Canadian Roundtable for Sustainable Beef (CRSB) standards.

The CSRB, a non-profit that brings together the beef industry, academics and the government, established a voluntary tool to track sustainable beef sourcing. However, it has faced criticism as a “greenwashing” effort due to its haziness, claims of the existence of loopholes and failure to address systemic supply-chain issues related to processors and retailers.

Another effort to develop a more sustainable supply-chain is McDonald’s Canada’s partnership with Ducks Unlimited Canada and Cargill to support rancher-led work through a $5 million Forage Program. It intends to return 125,000 acres of cropland to grass and pasture by 2025 to support regenerative agricultural practices.

Nicholas Sokic Transportation EVs International Apr. 13 2022
Tyler Choi Business editor, Sustainable Biz Canada
Tyler Choi is a journalist based in the Toronto area. He has covered a wide range of sectors ranging from science and technology, the environment, business, government policy and crime, to finance. Among the many people he has interviewed, his favourite was an Ig Nobel Prize winner.