Nanaimo, on Vancouver Island, has become the first city in Canada to adopt a new economic model w... 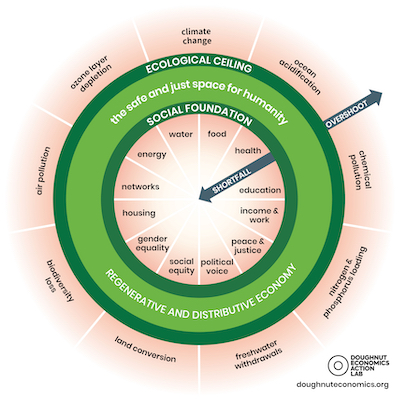 Nanaimo, on Vancouver Island, has become the first city in Canada to adopt a new economic model which challenges the growth-driven capitalism we’ve long taken for granted as the only way of doing business.

The municipality and some members of Nanaimo’s business community are officially embracing “doughnut economics”.

The doughnut economy is the brainchild of Oxford University economist Kate Raworth, who outlined a revolutionary alternative to growth in her 2017 bestselling book, Doughnut Economics: Seven Ways to Think Like a 21st Century Economist.

The shape of the humble doughnut best illustrates the model. It’s a straightforward concept that integrates environmental and social wellbeing with business and city planning goals, allowing for a more diverse and equitable playing field.

Basics of the doughnut economy

The minimum basics for survival are the inner ring of the doughnut, the social foundation that includes clean water, housing, sanitation, energy, education, healthcare, equality, income and political voice. If those things are missing, then you’re living in the centre hole, where there is a shortfall.

The outer ring of the doughnut is the ecological ceiling that represents the earth’s limits. Overshoot that ceiling, and you get ozone layer depletion, climate change, ocean acidification, chemical pollution, land conversion, air pollution, and all the ills that befall a planet pushed too far — conditions we are now experiencing.

In that space between the social foundation and the ecological boundary is where the needs of the human species and those of the rest of the planet intersect. There we find “the safe and just space for humanity,” built upon a regenerative and distributive economy.

That’s the opposite of the economy we have now, whose purpose is to grow at all costs, to the detriment of most humans and planet.

“We cannot let our collective resource-use overshoot that outer circle,” Raworth said at a TED talk in 2018. “To meet the needs of all within the needs of the planet, it invites a new shape of progress. No longer this ever-rising line of growth, but a sweet spot for humanity, thriving in dynamic balance between the foundation and the ceiling.”

Support from some Nanaimo biz

It’s a significant move away from the old paradigm by which progress is measured according to monetary growth and mass consumerism, Raworth argues. Instead, we need economies that help planet and people thrive, because the status quo is not working.

Our addiction to an economy that flies upward like an airplane which can never land has led to the de-stabilizing of the planet and an ever-widening gap between rich and poor.

John Hankins, commercial realtor and chief executive officer of the Mid Island Business Initiative, said he and several members of the Nanaimo-area business community are on board with Raworth’s model, which has been most notably embraced by the city of Amsterdam.

The purpose of his organization is to raise Nanaimo’s profile and attract business. Nanaimo, he said, is much smaller than Amsterdam, so implementing the doughnut model should be easier to do.

“We are only a city of 100,000,” said Hankins. “In terms of the leadership side, and showing the way for Canada, we have much more chance of being able to implement something like this than a much bigger city.”

The idea to be the first city in Canada to embrace the doughnut came about largely because of the pandemic, he said. It’s an intriguing model that could also raise Nanaimo’s profile.

“We started in March of last year, to look at what other cities were doing, because we all faced the same predicament, to emerge from this crisis. And using the old Wayne Gretzky quote, we said, ‘let’s skate to where the puck is going, not where it is.’

“We don’t represent every business in our area,” said Hankins. “But [the ones we do] were intrigued enough to say, ‘we should move forward on this path.’ So now the city has adopted it, and we are in support of it. We have started going through the education and communication piece with the business leaders, and we are at the stage where we are asking, what are their concerns.”

A close vote to adopt model

Nanaimo city councillor Ben Geselbracht brought forward a motion in December to implement the doughnut as the new framework for city initiatives and its planning processes. Not everyone was convinced.

The motion was put to vote and narrowly passed 5-4. Geselbracht said that if they’d had another month for council to do more research on the model he thinks it would have been unanimous.

The City is also revising its community plan, which should be complete by the fall. With the new doughnut framework adopted, it will establish three key land-use scenarios, and each will be measured in how effectively it meets established targets. The scenarios will then be put through a community engagement process, said Geselbracht.

He has had virtual meetings with Raworth and policy makers in the region to downscale the doughnut to suit Nanaimo’s specific needs. For example, 70 per cent of carbon emissions are from transportation and 30 per cent are from the built environment, so targets will be set to reduce those emissions.

The city could then aim to increase walking, biking and transit, build infrastructure for electric vehicles, and focus on walkable, dense neighbourhoods that reduce sprawl. When a development permit comes up, staff could assess how the project plans to manage water runoff, which causes water pollution and land erosion.

Another key issue for Nanaimo is growing homelessness. The region has seen a spike in housing prices during the pandemic as people migrate from other areas and rush to buy in to the market.

Its vacancy rate is around one per cent and an estimated 6,000 people are living without safe, secure housing. Secure housing is key to well being and to a thriving community.

Increasing multifamily units could play a role in this, said Geselbracht. Nanaimo housing is mostly single-family homes, with about 35 per cent of the stock multifamily residential.

“This is a metric that indicates we are not performing well, so we need to work hard at figuring out how to increase the stock of affordable housing in the community with whatever means we have,” said Geselbracht.

That means increasing rental housing, and policies which allow for the intensification of neighbourhoods, with diverse housing options to allow for each stage of a person’s life. It would also mean taking a look at reducing carbon emissions during the development process.

The doughnut is only one framework, but Geselbracht said that after thorough research he came to the conclusion that it’s the best one. It’s also gaining traction globally.

Word about Nanaimo’s adoption of the model has spread. A student from the University of Barcelona inquired about doing an internship with Nanaimo.

“I think a lot of communities are looking for these holistic frameworks to communicate the guiding vision for the community and be a strong planning tool to direct how the city’s planning is done,” said Geselbracht. “The doughnut model does a great job of integrating the environmental sustainability lens with the need for social equity.

“I spent a lot of time looking at frameworks and this one is the most integrated.”

Kerry Gold Business reporter
Website: http://kerrygoldcanada.com Kerry Gold has spent more than a decade as a full-time freelancer, writing a weekly real estate and housing column for the Globe and Mail. She also writes investigative pieces for the Walrus, and has written for many other publications, including MSN, Yahoo, Maclean's, MoneySense, BC Business, the Toronto Star, L.A. Weekly and Variety. She spent the first decade of her career at the Vancouver Sun as a music critic and reporter. She also writes books on business, music and food.