Nanoprecise Sci Corp, a predictive maintenance startup that applies artificial intelligence and I... 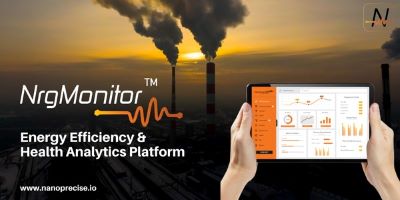 A self-described “mature startup” according to chief commercial officer Graham Kawulka, the Edmonton-based company has been around for five years offering predictive maintenance solutions for the industrial sector.

It recently took a step into sustainability with NrgMonitor, an IoT platform for motor-driven equipment sets such as turbines and reactors, which tracks changes in energy consumption and the corresponding greenhouse gas (GHG) emissions.

“There’s a direct tie (to sustainability),” Kawulka said. He noted machines that run poorly or are not aligned properly will consume more energy, requiring five to 15 per cent more power to operate. By identifying a power increase to a machine, NrgMonitor can alert users to potential problems that require an investigation.

NrgMonitor recognizes abnormal energy use through IoT sensors attached to a motor device via non-intrusive means to brownfield applications (environments that require new or updated software). It communicates information regarding upticks in magnetic flux — a proxy for electric currents and nominal energy consumption — to the user through Wi-Fi or cellular LTE, which transmits data multiple times daily to a cloud platform where it is automatically analyzed with AI.

From this process, Nanoprecise can calculate how much power and resulting GHG contribution is being devoted to running inefficient machines. “If you’re even 10 per cent more than you need to be, over a year that adds up to a serious amount of GHG and dollars,” he said.

The company estimates it can cut industrial GHG emissions five to 15 per cent.

The industrial sector is a major component of global warming, contributing 24 per cent of man-made GHG emissions in 2019 according to a study by the Intergovernmental Panel on Climate Change. The estimate for GHG emission reduction was provided through a paper by Pruftechnik, a part of Fluke.

Kawulka compared NrgMonitor to measuring fugitive emissions with an infrared camera, a method which only accounts for a fraction of emissions compared to the total wasted power on machines. The advantage of NrgMonitor, he said, is getting to the “granular level of a machine, by being able to calculate what machine is unhealthy, and where you can actually improve your GHG and power wastage.”

The company has just begun marketing NrgMonitor, but it expects clients from the power, utilities, oil and gas, pulp and paper, mining, forestry and textiles industries to take an interest. It is also in talks with customers of its other machine health monitoring solutions to take an interest in NrgMonitor.

In addition to reducing GHG emissions, Kawulka pointed to NrgMonitor’s potential to cut back on equipment waste. With rotating equipment being the largest asset class in the industrial sector and facing the most failures, compounded by stretched supply chains, he said knowing where the problems are is more important than ever.

With NrgMonitor identifying the need for repairs and maintenance, he said companies are less likely to have to prematurely purchase replacements, saving money and resources.

Kawulka expects the industrial side to look into IoT to extend the life of machines, which would cut back on waste and be more sustainable long-term.

“If you can do an early-stage intervention on a $50,000 gearbox and it costs you $1,000 as opposed to throwing the gearbox away and buying a new one, it is good for sustainability and the corporate pocketbook,” he said.

It can also cut down on industrial downtime and prevent health and safety incidents, he argued.

Kawulka is excited by the potential for IoT to be a catalyst for a less wasteful economy. He referred to a proposal for IoT-based sensors to be attached to wooden pallets to track their use and reuse, so fewer pallets are disposed of, in a ‘pallet-as-a-service’ offering.

“Less throwing things away, more trying to trace them and have a circular offering,” he said.

Nanoprecise’s NrgMonitor joins other IoT and AI players in offering a constant stream of data about energy consumption to find efficiencies and reduce GHG emissions.

They include companies like Kontrol, which offers in-suite energy management and real-time control of HVAC systems through IoT; and Brainbox AI, an AI platform for buildings.

dcbel wants V2G technology in homes around the world

Nicholas Sokic Energy Electric vehicles International Aug. 22 2022
Tyler Choi Business editor, Sustainable Biz Canada
Tyler Choi is a journalist based in the Toronto area. He has covered a wide range of sectors ranging from science and technology, the environment, business, government policy and crime, to finance. Among the many people he has interviewed, his favourite was an Ig Nobel Prize winner.