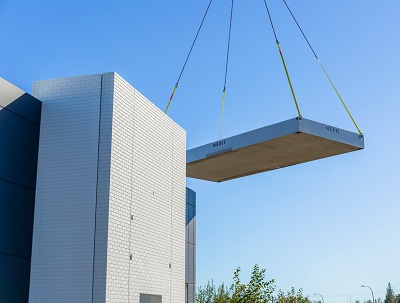 The speed at which the company achieved the milestone is mirrored by its ability to help builders rapidly develop sustainable commercial, industrial and residential buildings across North America.

Nexii’s patented building components have been employed in several recent high-profile projects. Among them are Canada’s first sustainably-constructed restaurant — a Popeyes located in Abbottsford, B.C. — and a first-of-its-kind sustainably built Starbucks, which was constructed in only six days.

The successes have helped Nexii achieve unicorn status, which is bestowed on about 800 companies worldwide as of September 2021.

The term “unicorn status” refers to a startup that has a valuation of $1 billion or more. To date, Nexii’s total equity raised is more than $125 million with post-money valuation on its last raise of $1.55 billion.

As of September, there were 15 Canadian unicorn companies, including cyber-security platforms 1Password, based in Toronto, and Trulioo of Vancouver. Famous former unicorn companies include Facebook, Google and Airbnb.

“At Nexii we are incredibly proud of how far we’ve come since launching as a small startup in Moose Jaw, Saskatchewan in 2019,” said Nexii CEO, Stephen Sidwell, in the announcement. “Today, we have expanded to eight manufacturing plants in operation or development across North America.

“We have world leaders on our board, incredible investors, technology partners, and a team of over 300 all committed to our mission of changing the construction industry, bringing high-performance sustainable building solutions to every sector of business and every area of the world.”

As SustainableBiz previously reported, Vancouver-based Nexii achieves its lower carbon footprint and energy use by employing a proprietary product called Nexiite, which is more thermally efficient and less carbon-intensive than concrete.

Nexii’s construction techniques require fewer resources, which reduce construction times. The company creates sustainable building products using 3D software, which allows panels to piece together like a puzzle. This reduces construction time by 50 to 75 per cent compared to similar-sized builds.

“I have always been a strong believer in the power of innovation to create meaningful change,” said David Taylor, the president and CEO of Proctor & Gamble and a newly appointed Nexii board member, in the release. “That’s exactly what Nexii is doing today — reinventing how the world builds, so we can reduce climate impacts in a meaningful way for our planet.

As of November 1 Taylor will transition to executive chairman at P&G. As part of Nexii’s board, Taylor will support the company as it expands across North America and internationally. The focus right now is on Pennsylvania, Toronto and Alberta.

“I’m excited to help the Nexii team scale their ground-breaking products and take sustainable construction across North America, and eventually, the world,” said Taylor in the release.

As a Nexii board member, Taylor will join Dr. Ronald Sugar, Uber chairman and board director at Apple; Bill McNabb, former chairman and CEO of Vanguard; and Mike Taylor, former global president and COO of McDonald’s.

“Never before has the work we’re doing at Nexii been so important,” said Gregor Robertson, former mayor of Vancouver, and current executive vice president of Nexii, in the release. “Buildings and construction account for 39 per cent of global climate pollution making the industry the No. 1 driver of the climate crisis.

“To help solve this, we must address the challenge of emissions from buildings and construction. That’s what we’re doing at Nexii, and that’s why such incredible partners are attracted to working with us.”

Nexii has created several high-profile collaborations, including with Honeywell to improve the automation of indoor comfort, while remaining energy-efficient. Honeywell is Nexii’s exclusive building technologies supplier.

Nexii also collaborated with Trane Technologies to develop sustainable commercial buildings, as well as Siemens to advance the rapid delivery of its building solutions.

The company has also forged celebrity partnerships, including with Golden Globe award-winning actor Michael Keaton to transform a brownfield site in Pittsburgh into a new sustainably-built Nexiite manufacturing facility.

Super Bowl MVP Joe Flacco is supporting the opening of another manufacturing facility in Hazleton, Pennsylvania.

Nexii has a Canadian manufacturing facility in Moose Jaw, Sask., and a second production facility under construction in Squamish, B.C.