A 3D construction printing company based in Kingston, Ont., says it can offer a solution to the a... 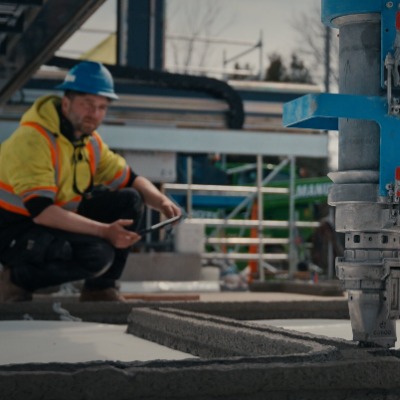 A 3D construction printing company based in Kingston, Ont., says it can offer a solution to the affordable housing problem in Canada while demonstrating a more sustainable model for the housing industry.

nidus3D, led by president and co-founder Ian Arthur, builds houses using a gantry-style 3D printer measuring 40 feet in length and width and 27 feet high, which extrudes concrete. First, the company sets up the gantry — the metal frame which supports the printer — on the site of construction, where a nozzle weaves the house layer-by-layer in a process which resembles icing a cake.

In an interview with SustainableBiz, Arthur said 3D printing can execute a build process with a level of predictability that is “unparalleled.” Unlike traditional house building, he said it can meet the scope, schedule and budget because it is automated and requires minimal oversight. Other efficiencies include mixing batches of concrete on site, which is a significant reduction of labour.

Arthur is a former chef and Member of Provincial Parliament for the Kingston and the Islands legislative district of Ontario.

He founded nidus3D because of the affordability and housing problem across the province he saw first hand, and felt current solutions did not address the issue in a significant manner.

Looking to lead by example, nidus3D will participate in a project with the University of Windsor and Habitat for Humanity – Windsor-Essex to build the first permitted 3D residential multi-unit building in Canada. It will consist of four units measuring at 560 square feet and made available by the summer of 2022 to individuals and couples seeking affordable housing.

“You can eliminate as much red tape as you want to, but until we address the underlying issues of ever-rising material costs, a massive labour shortage, and increases in cost of labour, it’s a bit of a pressure cooker of a situation,” he explained. “We have huge challenges in this area and I think the introduction of new technologies like 3D printing can be a big part of the solution.”

“We have very, very little waste,” he said. “We’re really only the concrete that’s in the hose at the end of the day. So, we’re talking about one to three per cent waste on a job site.”

He claims there are fewer transportation-related emissions because concrete is batched and mixed on site, which eliminates the need for truck after truck to deliver concrete, thus spewing emissions.

The 3D-printed buildings are also said to have “tremendous” potential for energy efficiency, as they can introduce more wall depth for insulation without raising build costs. Even the insulation can be sustainable, with nidus3D interested in testing sustainable insulation like cork crumb, blown-in wool insulation, and recycled tire crumb.

Arthur said the 3D-printed concrete homes are more climate resilient than wood-frame buildings and built to be multi-generational “100-year-old homes”. They are also more feasible to decommission, he said, and the concrete can be recycled and reused as aggregate.

“We really are trying to look at these builds with the full life cycle of the building in mind and trying to adapt to better suit that.”

Jay Sachdev, a press contact for nidus3D, said 3D printing creates fewer emissions due to reductions in heating, power, labour and materials compared to traditional house building. Sachdev said the company does not yet have firm data specific to nidus3D, and is conducting research with Queen’s University and the University of Windsor to fill in the gap.

A study from 2014 suggested 3D printing in industrial manufacturing could reduce energy consumption and CO2 emissions by five per cent, with potential to increase that figure with further adoption into other industries.

Concrete is anything but a climate-friendly substance. The concrete industry is responsible for eight per cent of global carbon dioxide emissions, according to Chatham House, with expectations for that figure to rise as the world continues to build and industrialize.

It is a problem Arthur is aware of.

There is one group that looked to lower emissions associated with the making of Portland cement, a major ingredient of concrete, using solar energy. It is also not the exclusive material that nidus3D will settle on, as it will explore more sustainable, lower-emissions materials like wood composite and glue-based materials.

The company is currently in a pilot and has one 3D printer. There are plans to acquire a second printer in Q4 2022 that can nearly double the printable length, enabling significantly larger buildings.

Arthur anticipates the cost of 3D construction printing to fall significantly over the coming months and years. He said the cost per home is currently around the price for an insulating concrete form home.

Hoping to see the technology expand across Canada, Arthur said it can piggyback onto other efficiencies. He holds that 3D printing can lower housing costs while not undercutting environmental protections.

SBC Staff Waste Circular economy International Oct. 12 2021
Tyler Choi Business editor, Sustainable Biz Canada
Tyler Choi is a journalist based in the Toronto area. He has covered a wide range of sectors ranging from science and technology, the environment, business, government policy and crime, to finance. Among the many people he has interviewed, his favourite was an Ig Nobel Prize winner.