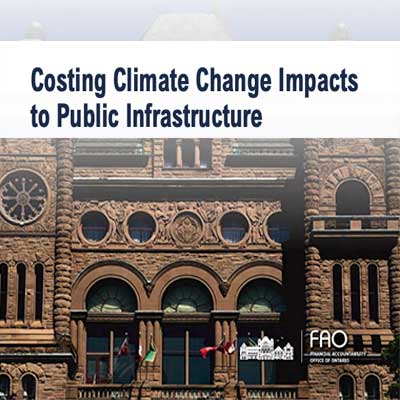 The Financial Accountability Office of Ontario (FAO) released the Costing Climate Change Impacts to Public Infrastructure Project on December 7, detailing the costs to the province’s buildings and infrastructure if it fails to adapt to a warming planet.

Currently, “under stable climate conditions,” it costs about $10.1 billion to keep Ontario’s public buildings in a quality state each year, or about $799 billion in 2021 dollars by the end of the century. Without climate adaptation measures, the buildings section of the report shows the province is looking at an additional $6 billion between now and 2030.

If global emissions keep rising indefinitely and the province does nothing, Ontario is looking at an additional $116 billion in costs by 2100, or $1.5 billion per year.

In response, the FAO has presented two strategies: reactive and proactive. A proactive strategy wherein most public buildings are adapted to projections of extreme rainfall, heat and less freeze/thaw cycles in a medium emissions scenario would cost an additional $54 billion to 2100. In a high emissions world, that cost is $104 billion.

A reactive adaptation would cost $52 and $91 billion respectively in medium and high emissions scenarios. Doing nothing would incur no immediate costs, but would mean the effects of extreme climate change would cost significantly more later.

The report also makes note of the costs from planned and unplanned service disruptions, which would be numerous in either a high- or medium-emissions scenario but were beyond the scope of this report. While adaptation would be expensive, it would be less costly for both provincial and municipal governments over the long term.

Other benefits would include minimizing public disruptions.

The report defines its three emissions scenarios as:

– Low emissions scenario: a peak in the early 2020s and decline to zero by the 2080s, with negative net emissions by the end of the century.

– Medium emissions scenario: a global peak in the 2040s, a rapid decline over the next four decades and a stabilization by 2100.

Which path to take?

The more conservative of the two pathways would mean only 77 per cent of buildings are adapted to the effects of climate change by 2100. The more extensive investment would allow most buildings to be ready for late-century climate impacts by 2060, as well as savings of up to $12 billion.

Given the uncertainties around many of the future impacts of climate change, the report states some costs are difficult to predict. Thus, the report does not factor in potential disasters like drought, ice and wind storms, flooding, wildfires, a rise in sea levels nor melting permafrost.

The FAO estimates Ontario’s provincial and municipal governments own and manage about $254 billion of public buildings and facilities.

The FAO is still completing two additional reports on climate costs, one looking at transportation and the other at water infrastructure. There is no indication yet when they will be completed and released.

This first report was originally requested by Ontario Green Leader Mike Schreiner in 2019.