Sustainable homes are no longer reserved exclusively for the elite. “If you can afford to build a... 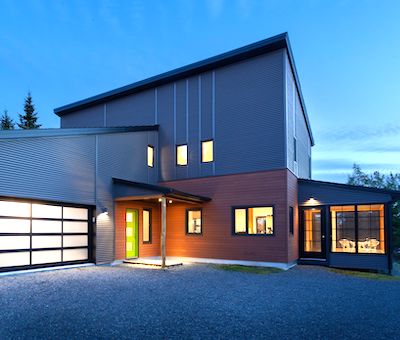 Leonard, an  engineer, is the first Certified Passive House (PH) consultant and certified PH builder in Canada. Her Halifax-based company has completed more than 100 PH projects which are net-zero ready.

“We exclusively work in small residential projects,” Leonard told SustainableBiz.ca in an interview.

That means single-family, duplexes, quadriplexes, or small apartment buildings under 9,000 square feet and less than three storeys, so they fall into the proper section of the building code.

“About 60 per cent of all energy used in homes in Canada is used for heat,” said Leonard. “We have a very cold climate. So, any climate in Canada can benefit from this approach to design.”

The savings are significant (the following figures are taken from the PDS website):

Under this German standard (a.k.a. Passivhaus), buildings consume up to 90 per cent less heating and cooling energy than conventional buildings. Passive Houses follow local building codes, but also go well beyond those codes.

“Passive House is really about optimizing the building envelope, or the shell of the building, so that we reduce the heating and cooling loads in the building, and we’re reducing those by 80 to 85 per cent over a code-built house.” 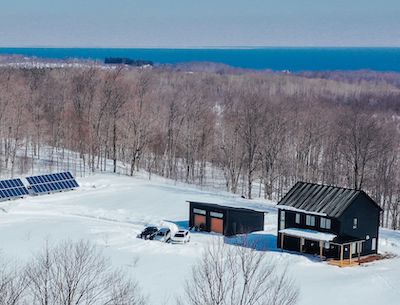 This Passive Design Solutions home was built north of Owen Sound, Ont. The residence is off-grid, and near net zero with a plan to add more solar panels. The owners use a small amount of propane for cooking and heat. (Courtesy David Stewart Media)

That means walls are typically 13 to 16 inches thick. Leonard says there is two to four times as much insulation, and all windows are triple glazed. The concept of ‘air tightness’ is key.

When air leaks through the building shell it also takes moisture with it, and “that moisture can accumulate in the shell and cause moisture problems abroad and mould,” she continued. “So, a Passive House approach provides a much more durable building and less risk of mould and rot.”

The sun is factored into the design plans.

“Where possible, we take advantage of the sun, so up to 50 per cent of the heat can come free from the sun by orienting the building toward the south for your daytime living spaces … so that you have natural day lighting and free heat from the sun,” Leonard said.

“Once you’ve made this super-insulated, airtight building shell with really high-quality windows and doors, then the mechanical systems that we need to operate the house are a lot smaller so that the heating system size can be that of a couple hair dryers, depending on the size of the house. It can be as small as equivalent to one hair dryer.”

Leonard calls it the most cost-effective green solution on the market, fulfilling her commitment to reducing the housing industry’s carbon footprint and making a significant contribution to the fight against climate change.

Leonard grew up in the construction industry, working with her father — who’s also an engineer— operating a general contracting company.

“I talked to a number of clients about this idea and people were really interested, but nobody kind of wants to be the first person, so the way that I got started was I built a house on spec,” said Leonard.

She financed the project herself, sold it on MLS in about three weeks and then began construction.

“And then once we had that first project going, it’s quite interesting and a lot of projects kind of popped up in, in the same time frame,” said Leonard. A decade later, she’s going strong with “a lot of referrals from existing clients.”

“Our market penetration in Nova Scotia is about three per cent, so it’s still a small number of new homes, but it is kind of over that tipping point of adoption of new methods of technology,” she explained. “And then of course, the growing awareness of the climate crisis … building a house is probably the largest decision you can make in terms of your carbon footprint.”

Over the last 18 months “our number of inquiries have grown by about four times, so about 400 per cent.”

“We’ve trained about 130 builders over the last three years and they’re often bringing clients to us,” Leonard said.

Custom architectural home design typically ranges from $20,000 to $80,000. Leonard’s stock plans — with a specific solar orientation — are under $7,000. The smallest start at about 500 square foot, literally a “tiny house”.

“The single best thing we can do for the environment is build the smaller spaces to accommodate your needs,” said Leonard.