Schneider Electric has partnered with the Woodbridge, Ont.-based Country Homes to install the Wis... 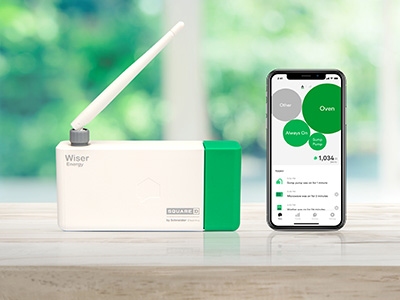 Schneider Electric has partnered with the Woodbridge, Ont.-based Country Homes to install the Wiser Energy Smart Home Monitor in its new homes.

“It’s about providing data and it’s about giving people the ability to make decisions on the spot to make more sustainable choices,” said Dan Murphy, Schneider’s director of business development – home builders, in an interview with SustainableBiz.

The monitor itself is a small component that can be fitted into any electrical load centre, new or old. It then uses machine learning technology to interpret the electrical signals in a home on what Murphy calls “a pilot level.”

That consumption data is then visualized for homeowners in variously sized circles on the monitor. Users can turn on or off their connected devices from the Sense app, track savings, estimate monthly energy bills, create custom notifications and set energy goals to save waste.

If the homeowner has a solar energy system, they’re also able to view solar production and usage via a specific edition of the monitor.

The systems must be installed by a licensed electrician.

Schneider started focusing on the home-builders’ segment of the residential market in July 2021. Murphy said Country Homes was one of the first companies with which it collaborated.

Other collaborations into the future

Schneider is also working with Country on its “Discovery Homes Project” which involves two completed semi-detached homes, each with their own net-zero approach. Each used its own energy advisor and receive third-party verification.

The first was developed in partnership with Enbridge and Building Knowledge through the Optimum Home Program; the other with ClearSphere.

Now, Schneider has home-building partners “coast to coast.” Murphy said the sky is the limit in terms of the number of monitors which could be installed, given the long-term plans to work with Country and its other partners.

“We think it’s our role to bridge the gap in providing sustainable solutions,” Murphy said. “We think by working with home builders and getting integrated in the home-builder community, we’ll be able to bridge that gap.”

This partnership isn’t the first step into sustainability for Country Homes, either. Its first Energy Star subdivision, the Sterling development in Georgetown, Ont., consists of 38 townhomes in seven blocks. Each includes features such as efficient heating and cooling systems, enhanced levels of insulation, Energy Star-rated windows, which earned the subdivision the 2016 Halton Hills Green Development Leadership Award of Excellence.

“We’ve seen studies that show energy efficiency is in the top five of homebuyers’ requests,” said Christian Rinomato, Country Homes’ head of sustainability, in the announcement of the Schneider collaboration. “I believe it’s going to be a much larger priority in the coming years, and then it will become the norm. Buyer adoption is going to happen naturally. This is where the world is heading.”

The goal is to “future-proof” the company’s new homes.

“It’s a lot easier for us to do it now than for a homeowner to do it later,” Rinomato noted, adding that electric vehicle rough-ins have been standard in all Country Homes since 2018. “Solar energy, battery storage, EV chargers, those are all elements of our community design plans going forward,” says Rinomato.

Schneider’s global headquarters are in Rouelle-Malmaison, France, with its Canadian branch based in Mississauga.

The company is on the CDP’s climate change A list, and was included in the Dow Jones Sustainability World Index in 2021 for the 11th consecutive year. It also placed in the top one per cent of the 85,000 corporates assessed for the EcoVadis ratings, and ranked first in the Electronic Components & Equipment sector in Europe for the Vigeo Eiris index.