Seneca College has invested more than $500,000 in sustainable landscaping work at its Newnham cam... 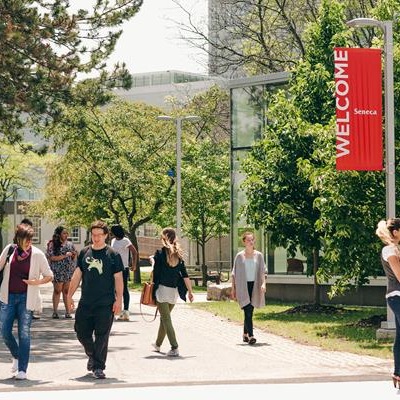 Seneca College has invested more than $500,000 in sustainable landscaping work at its Newnham campus as part of its wider Our Path Forward sustainability plan.

“One of the biggest issues that we face is that over the years, you get much salt dropped because of the winter, so you get a lot of contaminated plants and soil because of that, which was costing us a lot of money in landscaping work every year,” Angelo Miranda, director of capital projects at Seneca College, told SustainableBiz.

He said the funds were used to create a naturalized landscape by planting native plants, grasses and flowers to support pollinator pathways at the Newnham Campus, which is located near Hwy. 404 and Finch Ave. E. in Toronto. The improvements are designed to lower annual costs and promote green spaces at the North York campus.

An additional $250,000 has been earmarked for various landscaping projects and other sustainable outdoor projects around the campus. Miranda said officials have been planting salt-resistant shrubs and trees and overhauling its outdoor spaces to create unique green spaces for students, employees and faculty.

Seneca received approximately $150,000 through the City of Toronto’s Greening Partnership Grant for naturalized landscape work at Newnham Campus to recoup some of its initial costs.

It is the latest project within the Our Path Forward initiative, and follows past sustainable upgrades at the Newnham Campus, including LED lighting upgrades and 10 electric vehicle charging EV installations around the property.

Launched last September, the five-year plan charts a formal framework for becoming “the Sustainable Seneca.” Priorities include developing a sustainability policy and adding sustainability as one of Seneca’s core academic literacies.

Seneca’s sustainability efforts have aligned with other schools making similar investments in their campuses and core values. In addition to ongoing work at its Newnham campus, Seneca’s King campus has also seen sustainable investments during the past several years.

Seneca is renewing about 52 acres of forested area at the King campus. The project is part of a 20-year forestry plan with multiple goals: environmental protection, biological diversity, recreation, nature appreciation, education and preserving wildlife habitat.

“By selective harvesting in the forest, new tree growth is possible. Also known as a thinning operation, the work will create gaps in the canopy and promote the regeneration of native species,” the plan reads.

Some other initiatives include:

– More than two million bees in 50 hives on three campuses;

– Becoming a signatory of the UN Principles for Responsible Management Education;

– More than 1,800 kgs of compost created annually at the Newnham campus;

– A total of 36 EV charging ports at King and Newnham campuses.

This year, Seneca is putting work into its sustainable commuting program to encourage alternatives to fossil-fuel-powered vehicles.

Miranda said that while no new EV charger installations are planned at Newnham, Seneca is supporting several sustainable initiatives, including: Rideshare and carpooling programs; as well as conducting talks toward the completion of bicycle links from Finch station to Newnham Campus, from Newnham Campus to the Don Valley, and other bicycle lanes around Seneca campuses.

According to its sustainability plan, the institution also plans to replace the Seneca fleet with zero-emission vehicles by 2026. Over the next year, it plans to create committees to ensure net-zero targets are being achieved and continue to pour resources into education and research.

Canada is just scratching the surface of mass timber development

Canada ranks No. 2 in world for LEED-certified buildings