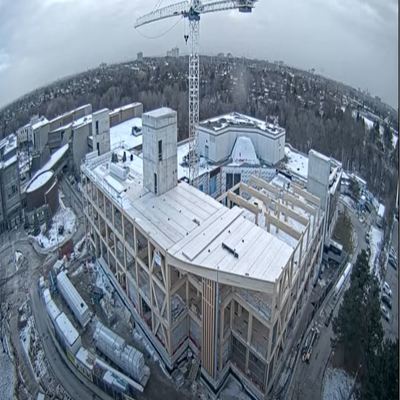 The project is being built in collaboration with construction services company EllisDon, architecture firm DIALOG and Anishinaabeg-owned and operated Smoke Architecture.

The design of the $105-million expansion to the A-Block campus building is based on the Indigenous concept of ‘Two-Eyed Seeing.’

The term, translated from ‘Etuaptmumk’ in its original Mi’kmaw, was developed by Mi’kmaq Elder Albert Marshall. It refers to two ways of seeing the world: one way of knowing being Indigenous, and the other a Eurocentric view.

The concept, and the way the building is being constructed, come together to create a unique project.

The mass timber structure itself is primarily composed of Glulam laminated timber and floor slabs of cross-laminated timber (CLT). Its being supplied by Quebec-based Nordic Structures.

The six-storey addition will provide 150,000 square feet of academic programming space for School of Engineering Technology and Applied Science programs, flexible classrooms that support Indigenous ways of teaching and being, as well as support areas such as an engaging student touchdown area, collaborative spaces, administrative offices and food services.

Concrete is required for some of the structure, but EllisDon senior project manager Dan Beadle said other than slabs on the lower levels, the elevator and the stairs, the bulk of the building is composed of mass timber.

“We started the mass timber (in) mid-October, and we’re already up to the start of the fifth floor now. So a couple more floors, and the roof to go,” said Beadle. “All the mass timber should all go up in about four or five months.”

The sustainability aspects of the building grew out of the Two-Eyed Seeing perspective.

“The Indigenous concept of Two-eyed Seeing empowered our team to explore the ideas of zero carbon and mass timber through an Indigenous lens, as well as a Western lens,” says Craig Applegath, principal-in-charge at DIALOG in a statement on the project. “The two perspectives amplified each other.

“For example, the aluminum cladding was detailed with contemporary parametric software to replicate the way a fish’s scales move over its body, shifting independently yet forming a single skin. It’s incredibly functional yet also quite magical.”

“We also have these seven columns with different Indigenous teachings on the outside and a whole rock feature toward that,” said Beadle. “The college overall is trying to do its bit in truth and reconciliation. And so that’s what drove the mass timber and that’s what drove a lot of the sustainability objectives as well, tying to that Indigenous concept overall of living in harmony with nature.”

According to Beadle’s breakdown of the building, the bottom three floors are largely classrooms with the top three mainly comprised of administration. There’s also a kitchen, common areas and a courtyard planned. The college also instituted a multi-faith room of meditation and worship and gender-neutral washrooms.

Upon completion the college is aiming to achieve a minimum LEED Gold Standard, WELL certification and a Net-Zero, or possibly Net-Positive, building designation. The net-zero goal involves rooftop solar panels and the WELL certification leans on wellness as a concept in the building’s design, which in practice includes a wellness library as well as signs encouraging people to take the stairs.

EllisDon completes in excess of $5 billion worth of contracts annually.

DIALOG has designed over 100 LEED-certified buildings.

Smoke Architecture has been providing services to First Nations and Indigenous projects since 2014. Some of its other projects include an Indigenous Peoples’ Space at the site of the former U.S. Embassy to Canada in Ottawa for the Assembly of First Nations as well as a shelter for victims of family violence for the Naskapi of Kawawachikimach near Schefferville, Quebec.

A 24-hour livestream of the building’s construction can be found here.

Mass timber key to sustainable construction, but not whole story

5 ways Canada’s builders can boost sustainability in a hurry