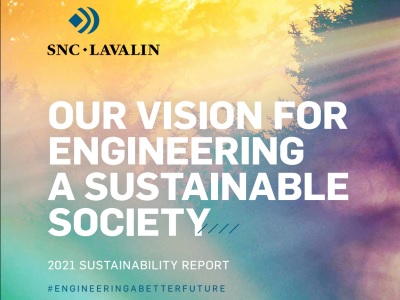 SNC-Lavalin unveiled the progress made toward its ESG goals in 2021, highlighted by a significant reduction in greenhouse gas emissions. (Courtesy SNC-Lavalin)

Canadian construction companies SNC-Lavalin and PCL Construction announced updates and progress on their ESG commitments made in 2021, with SNC-Lavalin marking attempts at improving their internal integrity and greenhouse gas (GHG) emissions.

SNC-Lavalin
An engineering and professional services firm headquartered in Montreal, SNC-Lavalin is one of Canada’s largest construction companies and operates in over 160 countries.

Strategy and Updates: The company says it slashed its GHG emissions by 53 per cent globally from 2017 to 2021. The decrease is attributed to divestment from the oil and gas market, flights and business travel being limited to strictly essential activities through 2020 and 2021 and optimization of office space and real estate portfolio.

SNC-Lavalin claims to have reduced the energy use of its global operations by 63 per cent from 2017 to 2021 through office optimization, ending some energy intensive activities and the adoption of new technologies. The company admits its 2020 to 2021 figures were impacted by pandemic-related restrictions, but says it reached a peak in energy use and energy intensity from 2018 to 2019.

In 2021, the World Bank Group granted an early lifting of all sanctions imposed against SNC-Lavalin Group Inc. and its subsidiaries. These sanctions had been imposed in 2013 for a period of 10 years. This decision, which followed a rigorous assessment and monitoring process by World Bank authorities and an independent monitor, confirmed that SNC-Lavalin has met all the settlement agreement’s terms and conditions.

The company will continue to publish Integrity Program reports relevant to a 2019 settlement until December 2022, according to the company’s governance position in the ESG report. A SNC-Lavalin division pled guilty to a fraud charge in a 2019 settlement that ended with other charges against the company dropped. The company paid a $280 million fine and was subject to a probation period, which led to a series of internal integrity reforms that continue to take place.

This is its 12th ESG report.

In 2021, SNC-Lavalin met its goals for having women in managerial and senior professional positions and executive roles.

Scope 3: Out of two Scope 3 categories SNC-Lavalin tracks, it emitted 28,660 tCO2e of Scope 3 emissions. It plans to expand its assessment and inventory in the next years, in line with the Science Based Targets initiative (SBTi).

The company made a 30 per cent decrease in Scope 3 emissions compared to 2017.

Certifications: ISO 14001 and ISO 45001 certifications for health, safety and environment with its operations.

PCL Construction is a group of independent construction contractors that has operations in the buildings, civil and industrial sectors. The company is headquartered in Edmonton for its Canadian operations. It serves clients in Canada, the U.S., the Caribbean and Australia.

Strategy and Updates: In 2021, PCL Construction developed its strategy to reduce carbon and waste and improve water and facility management and completed 248 Leadership in Energy and Environmental Design (LEED) projects with a total value of more than $18 billion.

PCL Construction built: the first residential EnerPHit-certified project in North America, 3.2 GW of solar projects and over $500 million worth of biofuel and biogas projects.

The company completed projects like the zero-carbon building Roam Transit Operations and Training Centre in Banff, Alta., the net-zero mass timber Limberlost Place in George Brown College and the Travers Solar project in Vulcan County, Alta. The Travers Solar project occupies 3,300 acres and will generate 692 MW, which is said to be enough to power about 100,000 homes annually.

This is its third ESG report.

PCL Construction is collecting data on baseline emissions for a portion of its Scope 1, 2 and 3 emissions for its owned and leased offices and yards, and vehicles. When the data is collected, it will make an assessment for when and how to set an emissions target.

Tyler Choi ESG ESG National Sep. 16 2022
Tyler Choi Business editor, Sustainable Biz Canada
Tyler Choi is a journalist based in the Toronto area. He has covered a wide range of sectors ranging from science and technology, the environment, business, government policy and crime, to finance. Among the many people he has interviewed, his favourite was an Ig Nobel Prize winner.