Waste management innovator TerraCycle is teaming up with Holt Renfrew to reduce the amount of dis... 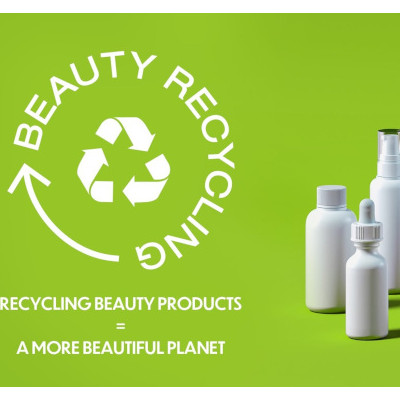 Waste management innovator TerraCycle is teaming up with Holt Renfrew to reduce the amount of discarded beauty product packaging. The companies plan to collect and recycle makeup packaging scraps to create new products.

“We are very proud to launch our recycling program for beauty packaging at Holts, in partnership with TerraCycle,” said Christopher Novak, vice president, beauty at Holt Renfrew, in the announcement. “Our mission at Holts is to empower self-expression and ignite positive change, and this partnership with TerraCycle will bring our customers along on this journey toward a more sustainable future in a truly beautiful way.”

TerraCycle was conceived in 2001 when founder and CEO Tom Szaky took a trip to Montreal and observed his hosts feeding kitchen scraps to red worms, then using the resulting fertilizer to nourish their indoor plants. It was then Szaky developed the idea of eradicating waste by using it to create another product (in this case turning food waste into fertilizer).

Today TerraCycle is an international recycler operating in over 20 countries and partnering with leading consumer product companies, retailers and cities repurposing hard-to-recycle waste that otherwise ends up in landfills. The company focuses on products that are typically not locally recyclable. It also works to incorporate waste, such as ocean plastic, into its products and packaging.

TerraCycle’s latest partner, Holt Renfrew, was founded in Quebec City in 1837 and is a major Canadian retailer of designer fashion and lifestyle brands. The new initiative is designed to reduce waste created by beauty product packaging. The launch of Holt Renfrew’s Beauty Recycling Program will support the company’s commitment to sustainability and positive change.

The program is not designed to compete with municipal recycling programs, rather it will augment those efforts. To this end, consumers should continue to utilize local curbside recycling programs for items which include glass, eligible plastics, aluminum, and other municipally recyclable packaging.

Other items which are not eligible for the Holt Renfrew / TerraCycle program include sharp or flammable objects such as aerosol cans, fragrance or nail polish bottles and nail polish remover bottles, which should be disposed of according to local regulations (potentially at hazardous materials dropoff points).

TerraCycle will provide Holt Renfrew with “Zero Waste Boxes” so customers can dispose of eligible, empty beauty products. The boxes will be located in Holts’ Beauty Halls. They’ll then be shipped to TerraCycle to process, clean, melt, and remold into new products.

“Holt Renfrew is acting as a force for good by offering a powerful, sustainable option to divert empty beauty packaging from landfills,” said Szaky in the announcement. “By participating in this recycling program, consumers can take an active role in how their packaging is disposed of, helping to pave the way for a more beautiful planet.”

In the announcement, Holt Renfrew says it has been working to minimize its impact on the environment, focusing on reducing its carbon emissions, waste and single-use plastics, using more sustainable packaging, and embedding more sustainable materials into its designs.

The company has signed on to the G7 Fashion Pact, pledging to improve its sustainability standards. The pact focuses on actions in three areas for protecting the planet, including stopping global warming, restoring biodiversity and protecting our oceans.

Holt Renfrew has seven locations across the country: four in the Greater Toronto Area and one in Montreal, Calgary, and Vancouver, respectively. Holt Renfrew Men — in downtown Toronto — will not participate as it does not carry makeup.

Information on participating stores and their locations, as well as recycling guidelines, is available at the program’s landing page. This initiative is not limited to Holts’ products; all makeup brands will be accepted, anyone can participate, and the program will be in place year-round.

Holt Renfrew is also planning to partner with TerraCycle to collect and recycle disposable masks, using in-store collections boxes. This initiative will reduce single-use plastic waste which has resulted due to the pandemic.

TerraCycle has earned over 200 awards for sustainability and was named No. 10 in Fortune magazine’s list of 52 companies Changing the World. It also has several other recycling solutions underway, including a collaboration with Procter and Gamble recycling laundry product eco-boxes and dental care products, which it calls Canada’s first oral care recycling program. For more information on TerraCycle’s recycling process is available at the company’s website.