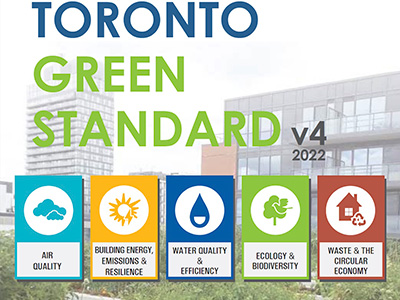 Commercial and multiresidential real estate developers in Toronto will face significantly higher sustainability requirements when the fourth version of the Toronto Green Standard (TGS) takes effect on May 1.

The TGS began as a voluntary guideline in 2006 before becoming mandatory in 2010.

Updated every four years, the incoming TGS introduces a four-tiered system, with Tier I the lowest (the mandatory minimum) and Tier IV the most stringent. Each time a new version comes into effect, standards from the previous Tiers II and III are generally adopted as the new minimum Tier I requirements.

“I think at a provincial level (building) codes are meant to make sure that everybody is doing better,” said David MacMillan, a program manager with the City of Toronto’s environment and energy division. “But in Toronto, we really want to push for the best.”

Some of the biggest upgrades in TGS v4 are the requirements for new mid- and high-rise residential and commercial builders to cut GHG emissions and energy-use intensity.

For city-owned buildings, net-zero emissions will be mandatory.

In the more stringent voluntary tiers, embodied carbon and sequestered carbon tracking is also being introduced – along with enhanced incentives for firms which make these commitments.

In December, Toronto City Council had already advanced its requirement for net-zero construction for mid-and high-rise residential and non-residential buildings from 2030 to 2028.

Upgrades are sectioned into air quality; energy efficiency with GHG and resilience; water balance, quality and efficiency; ecology; and waste and the circular economy.

For multiresidential buildings under six storeys, the energy use limit is 130 KWh per square metre, reduced from 165 KWh, while for commercial office buildings it is 130 KWh (formerly 175). Commercial retail will soon have a 120 KWh limit, down from 170. Finally, mixed-use buildings will be restricted to 134KWh, from 170 previously. The GHG intensity limits range from 15 kgs. down to 10 kgs. per square metre.

Developers also have to ensure at least 80 per cent of building roofs are green and 50 per cent of plants support pollinators.

MacMillan doesn’t see any one requirement as the biggest change. He also said this should not be a surprise for developers, as the standard has been in place and continually updated for many years.

“A better building envelope is going to be the hardest thing to achieve (for developers),” MacMillan said. “It means paying a lot more attention to the architecture early on in the process, as opposed to relying on the mechanical equipment.”

For voluntary measures in the higher tiers, the city offers development charge refunds as an incentive. To qualify for refunds, a third-party evaluator must examine and document the project post-construction.

Within TGS v4, one new requirement is to accommodate electric vehicles (EV) in 25 per cent of parking spaces. Should a developer of large buildings choose to go to Tier II in order to qualify for a rebate, it would need to reach 100 per cent EV parking spaces.

“(The evolving standards) are a combination of best-practice calibrating, local jurisdiction and then getting consultation with, eventually, those who have to meet these requirements, so that they’re comfortable,” MacMillan said. “That’s why we have these four-year increments, because ideally it’s more than a year ahead of time and they know what the forthcoming requirements are.

“It gives them time to ramp up.”

Matthew Tokarik, the CEO of Toronto-based Subterra Renewables which specializes in geothermal systems, said innovative new green energy systems will be one means for developers and owners to meet the more strict energy requirements. He said systems such as geothermal often involve more upfront costs, but lead to significant  savings in the long-run.

While noting the challenges of meeting the net-zero goals, he expressed confidence in the progress the TGS is making.

“The unfortunate truth here is that with the building and development community, sometimes the stick has to be used over the carrot,” Tokarik said. “When we’re trying to get to these goals, we’re really talking about trying to be there by 2030, which is not all that long away, particularly when you think about the time it takes to plan, zone, design and build a building.”

Looking ahead to future standards

An additional challenge for cities trying to cut emissions is that they’re doing so in a period of rapid population growth. A provincial population projection indicates the GTA is expected to grow to 10 million people by 2046.

In each new version of the Toronto Green Standard, consultations are held with a variety of city services and divisions, as well as stakeholders like the Canada Green Building Council, private industry players and academics.

With TGS v5 scheduled for 2026, MacMillan and other city planners are already looking ahead.

There will be a mid-term review in 2023 or 2024, and it’s possible an embodied carbon target could be one of the next key elements of the TGS. However, MacMillan agreed it’s “hard to say what the targets will be because it will be brand new.”

MacMillan also mentioned the possibility of the Tier II EV requirements becoming mandatory for the next version of TGS.

With the upcoming stricter standards within the TGS and the potential for even more stringent measures in future versions, he’s bullish on Toronto’s net-zero future.

“The business case (for carbon emission reduction) is getting almost intuitive. We’re not 100 per cent there yet, but I’m really optimistic about that trend.”