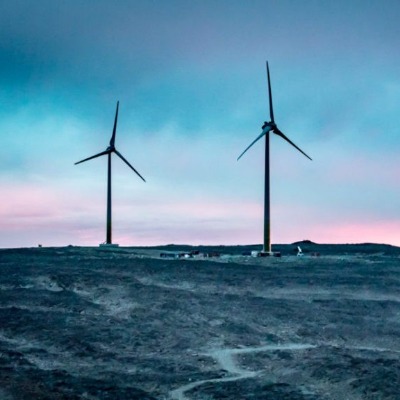 While alternative power sources, such as thermal liquid fuel-powered generation, have been a part of the mining industry’s adjustment to new emissions standards, on-grid operations are ramping up production projects with government and private-sector investments.

Tugliq Energy Corp. is one of the Canadian energy providers helping companies reduce fossil fuel usage. Through the construction of wind turbines and energy storage capacity, Tugliq is carving out a carbon-neutral future of its own.

The Montreal-based power producer recently partnered with Troilus Gold Corp. — a Toronto-based junior mining company that owns a 142,000-ha gold and copper mine in Western Quebec — to provide alternative energy solutions at the site.

The Troilus mine uses a fully operational 50MVA electricity substation connected to the Quebec electric grid. While that electricity is derived from hydroelectric power sources, the mine still operates using diesel generators.

Justin Reid, CEO and director at Troilus, said the roadmap would identify opportunities to reduce or eliminate the use of such fuels and GHG emissions that stem from it.

“One of the major competitive and environmental advantages of the Troilus mine site that we acquired in 2017 was the pre-existing substation and connection to the provincial grid that provide access to sufficient low-cost renewable energy to power the future production envisioned in the PEA (preliminary economic assessment),” the CEO said in a statement.

“We know there is more we can do now and, in the future, to reduce and offset GHG emissions from activities and machinery that we are unable to connect to the grid such as drilling, vehicles and backup generators.”

As the company finalizes its PFS study, the Tugliq-Troilus partnership will give mine operators the tools to make the right sustainable energy consumption choices alongside it.

One of Tugliq’s main goals is to provide technology and energy solutions in remote communities, including Canada’s Far North.

“A lot of mines located in the Arctic in northern Canada are exclusively based on fossil fuels, particularly diesel, and we are seeing many cases (of companies) looking at ways to integrate renewable energy,” she said.

In 2014, Tugliq Energy partnered with Glencore to power its Raglan nickel mine operation, located in the Nunavik region of northern Quebec.

Two wind turbines were installed to generate six megawatts of power per year for the mine, with each turbine producing three megawatts. It also built energy storage capacity and installed an AI-based management system.

The mining company plans to add an additional six megawatts of power per year — a move estimated to reduce CO2 emissions by 7,200 tonnes and save over six million litres of diesel annually.

“We’re seeing a huge interest in commitment from mining companies, from the entire sector, really going beyond just awareness, but looking at making commitments to implement in the short-, medium- and long-term (future),” Hamernik said.

“That said, we’re seeing that mines are saying things quickly, but that doesn’t always mean that they have meat around the bones for how to implement and execute.”

The company has been involved in similar projects in the past. In 2016, it partnered with Quest Rare Minerals to build wind turbines at its Strange Lake mining site near the Québec-Newfoundland and Labrador border.

Hamernik added that Tugliq plays a key role in helping mining companies with their sustainability goals, and noted steps toward carbon neutrality are being reflected in ESG commitments, where integration of renewable energies and the electrification of equipment is being done to reduce or replace diesel fuel or natural gas.

Last week, Tugliq announced a partnership with Ingenext, a Quebec-based company specializing in EV conversions. It will design and manufacture fit-for-purpose thermal energy management systems for its electric retrofitted pick-up trucks that adapt to cold-climate sites.

“Starting with pick-trucks, the first batch of converted vehicles are being tested and prepared in the south for winter-testing and deployment at partner sites in early 2022,” a similar post reads.

It has also announced partnerships to provide retrofitted electric vehicles to Quebec Iron Ore Inc., Bloom Lake Mine facilities operators near Fermont, Qué. The firm also plans to incorporate the technology in all operations that deliver power to the Raglan mine.