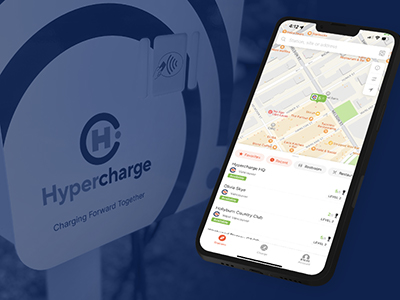 A Hypercharge station along with the AXSO-powered app. (Courtesy AXSO)

Hypercharge provides EV charging to the multiunit residential, fleet and public segments. The company plans to expand its network via deployment of both Level 2 and Level 3 charging stations across North America.

“They found that it will be cool for them to have a jump-start with our technology, instead of building this kind of technology,” said Louis-Vincent Courchesne, AXSO’s business development director. “Since we’ve been developing and upgrading this portal for last three or four years, we decided to have a partnership together to allow each company to grow.

“It was our first deal outside of Quebec, so it was great to have this opportunity to grow across Canada.”

Talks with Hypercharge began last September. The AXSO platform, which exists as a white label version for its partners, includes an e-wallet, a trip planner, a station finder and station-usage trends among other features.

Before this agreement, AXSO had the Electric Circuit as a client — the first large-scale public charging station network for Quebec and Eastern Ontario launched in 2012 by Hydro-Québec. It offers both 240- and 480-volt charging across over 3,500 stations.

AXSO was founded in 2019 and got involved with Electric Circuit in June 2020. This involved a migration from the original software supported by AddÉnergie Technologies Inc. and its subsidiary, FLO.

“Hydro-Québec, as a state company, would prefer to have its own software provider and to be able to install different types and brands of OCPP charging stations in the network, which was not possible under FLO software,” Courchesne said in an email exchange with SustainableBiz.

The other client is the City of Montreal, where AXSO assists with the city’s parking lots.

The Hypercharge app has been live since March. Some of the Vancouver-based network’s clients include the City of Toronto, QuadReal Connect, EPC Capital and the Royal Victoria Regional Health Centre.

Hypercharge’s Western Canada home base is one of the reasons the network proved attractive to AXSO as a partner.

“We thought that Hypercharge have great potential, because they have a great management team,” Courchesne said, explaining AXSO researched Hypercharge’s background prior to the deal. “Since they were based in the western part of Canada, we thought it would be great to have a partnership with a company based in the west.”

Courchesne stated Hypercharge is active in the west coast in Canada and is looking into expanding further both inside and outside North America. There are also thoughts toward allowing expansion into the U.S. in the areas where there are more Spanish speakers.

Courchesne said the company is looking for another partner in North America, with the next step being the European market. He even mentioned a possible Middle East connection.

“We’re looking to have some interoperability or roaming agreements with other charging networks,” Courchesne said. “Things are under discussion right now.”

Meanwhile, the Electric Circuit, which celebrated its 10th anniversary in March, announced plans to deploy 2,500 new fast-charge stations by 2030, and a funding program for 4,500 curbside charging stations to facilitate charging in major urban centres.

AXSO’s future is closely tied to the ongoing adoption of EVs. The Canadian government plans to have all passenger vehicles be zero-emission by 2035.

Courchesne acknowledged there could be challenges to the electrical grid as more and more people make the EV transition, particularly households with multiple cars. There are solutions, like further updates planned for the platform, but some of the relief to the grid may come from a perspective change.

“(Some) people believe that they need to (charge) the car 100 per cent every day in the morning,” he noted, but for shorter commutes perhaps a full charge is not needed.

This could mean several shorter, top-up type charges during off-peak times to share the load.

“We have also some work to do to educate people on how to use their car and how to optimize their charging experience.”

EDITOR’S NOTE: This article has been updated to include additional information and clarifications about AXSO’s client relationships and expansion plans, which were provided to SustainableBiz after the original article was published.

Nicholas Sokic Energy Ambri International Jul. 11 2022
Nicholas Sokic Business reporter
Nicholas Sokic is a freelance, Toronto-based journalist. He has covered a number of sectors, including business, finance, crypto, health, cannabis and culture. He graduated from Western University's Master of Media in Journalism and Communications program in 2019.