Climate solutions company Carbon Engineering Ltd. has partnered with 1PointFive, a subsidiary of... 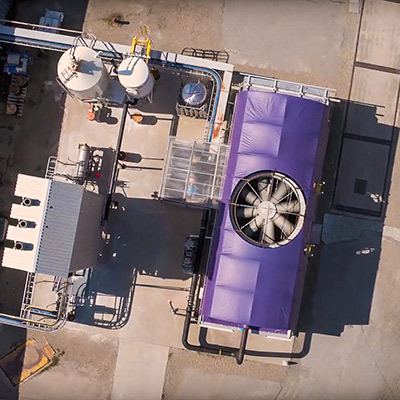 Given an increase in global policy initiatives around carbon capture and further demand in the voluntary market, the number of facilities could rise to 135 by that same year.

Each will have an expected capacity to remove one megatonne of carbon per year and be designed to operate for 30 years. The first will be located in the Permian Basin, which itself is located in western Texas and southeastern New Mexico and is expected to be operational by late 2024.

According to a Low Carbon Ventures investor update in March, construction will begin later this year and is expected to cost between $1.02 billion to $1.27 billion.

DAC technologies extract CO2 directly from the atmosphere. CE and 1PointFive plan to permanently store the CO2 underground or combine it with hydrogen to produce sustainable synthetic fuel that can be used in aviation, maritime and long-haul trucking operations via CE’s Air to Fuels process.

“As a capture company, we’re actually agnostic about, ‘how do we put those carbon dioxide molecules to work so that it makes it possible to capture them in the first place?'” said Lori Guetre, CE’s head of business development. “We’re really excited about the developing ecosystem of carbon utilization and durable storage solutions, like putting CO2 into concrete or making carbon products.”

CE’s DAC process works via pulling air into what is essentially a cooling tower, where it comes into contact with a potassium hydroxide solution, binding the CO2 molecules to that liquid which is then injected into the ground.

1PointFive was formed by Occidental as a carbon capture, utilization and sequestration platform to commercialize CE’s DAC technology at an industrial scale.

CE first caught Occidental’s eye after it published a white paper on its DAC technology in July, 2018. That led to fundraising and seeking out strategic partnerships in early 2019, from which Low Carbon Ventures joined CE around the same time as Australian mining company BHP and Chevron Corp.

“We believe this deployment approach and our partnership with CE will support rapid, global deployment of DAC facilities to meet the urgency of the climate challenge and growing customer demand for DAC-enabled net-zero solutions,” said Michael Avery, 1PointFive’s president, in a statement on the partnership.

CE will provide the technology, while 1PointFive will build and deploy the DAC plants. Plant components and equipment will be modularized, mass-manufactured and then assembled on-site.

In March of this year, 1PointFive announced the sale of 400,000 metric tonnes of carbon removal credits over a four-year period to aerospace leader Airbus, to be generated from the upcoming DAC plant.

Other partnerships and future

CE has other global partnerships for DAC plants “and more that we’re working with globally that we haven’t announced,” according to Guerte.

In 2021, CE and the U.K.-based Storegga Ltd. announced plans for a DAC facility in northeast Scotland, also targeting one million tonnes of carbon removal by the time its operational in 2026.

Later that year, in November, CE revealed a collaboration with Carbon Removal from Norway on a plant capable of removing between 500,000 to one million tonnes of carbon annually.

The same month, a collaboration between Huron Clean Energy, CE, Oxy Low Carbon Ventures and the Upper Nicola Band on a commercial facility in B.C. Located 25 kms from Merritt, B.C., on one of the Band’s reserves, upon its completion in 2026, it will produce 100 million litres of low-carbon fuel annually using CE’s DAC and Air to Fuels technologies.

CE was originally founded in Calgary in 2009 by Harvard professor David Keith. In 2015, the company moved to Vancouver and to Squamish, B.C. to build a DAC pilot plant which, when operating, captures one tonne of CO2 per day. It first captured CO2 from the air that same year and in 2017, CE produced its first supply of synthetic fuel.

The company’s white paper states it costs about $127 to capture a tonne of CO2 from the air at large scale. According to an Occidental presentation, the 1PointFive facility will have a cost between $382 and $542 per tonne for both the direct air capture and the carbon sequestration. However, Guerte and CE embrace anyone unsure of the possibility of removing carbon at scale for that price.

“A healthy skepticism that pokes at things and makes things better is always welcome,” Guerte said. “Until these projects are built and operating at scale, we should all take a skeptical eye to them and make sure that we understand the potential and are managing the risks and the claims of costs very carefully.”

This year, SustainableBiz had previously reported on CE being listed as one of 13 Canadian startups featured on the 2022 Global Cleantech 100, a ranking of privately-held cleantech companies deemed most likely to have a significant market impact over the next five to 10 years.

Beyond the up to 135 DAC plants, Guerte explained the company is always looking forward with Canada’s net-zero goals in mind.

“Climate experts say that we may need to be removing 10 to 20 giga-tonnes of CO2 from the air per year by the time we get to 2050, alongside all of our efforts to reduce our emissions and do other forms of carbon removal,” Guerte said.

SBC Staff ESG Sustainability National Jun. 8 2022
Nicholas Sokic Business reporter
Nicholas Sokic is a freelance, Toronto-based journalist. He has covered a number of sectors, including business, finance, crypto, health, cannabis and culture. He graduated from Western University's Master of Media in Journalism and Communications program in 2019.