CubicFarms says its growing systems cut energy use over 50% 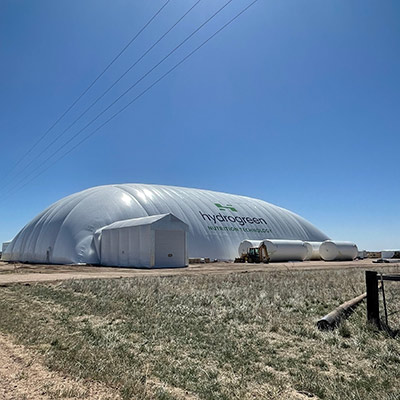 The exterior of the Burnett Land and Livestock site in Wyoming, where 12 automated vertical pastures are being built. (Courtesy CubicFarms Systems Corp.)

Agricultural technology company CubicFarms Systems Corp. says its vertical farming modules use 54 to 62 per cent less energy than similar systems in use around the world.

In another development, one of CubicFarm’s subsidiaries, HydroGreen Global Inc., has created a partnership with Deloitte LLP to develop a carbon credit program.

On the energy front, CubicFarms’ (CUB-T) compared its own internal results against other controlled environment agriculture systems which were reported in Agritecture’s 2021 Global CEA Census Report. The average figure in that report is 38.8 KWh per kilogram, or 17.6 KWh per pound.

CubicFarms claims its individual 320-square-foot system modules consume eight kWh per pound or 17.71 kWh per kilo of production. Its much larger FreshHub systems improve on those savings, to 6.67 kWh per pound and 14.95 kWh per kilo, the company claims.

“One of the biggest input costs in indoor farming is electricity. It became quite apparent that in the market, it wasn’t being talked about enough or addressed enough,” said Dave Dinesen, CubicFarms’ CEO. “Then the Agritecture survey came out and made it crystal clear.”

Agritecture’s census compiled self-reported data submitted by 331 respondents in 51 countries, with five per cent from Canada. CubicFarms, which did not participate in the census, took that data and compared it to its own results.

“We always knew that our patent, the Crop Motion Technology, made it efficient but this proved it,” Dinesen said. “Well, we need to make sure that we tell everybody.”

Crop Motion Technology moves trays of seed on an undulating path underneath a single layer of LED lights, rather than having a dedicated set of lights for each tray. It also assists with harvesting by bringing mature crops directly to the producers.

For its calculations, the company assumed a five per cent fail rate of spoiled or ruined crops. It also assumed a 10 per cent overhead energy draw, which includes aspects of production such as pumps, heating and cooling systems, power washers and facility lights.

Lighting typically draws 65 per cent of the energy in a vertical farm system. “Our numbers parallel this percentage of energy draw, but our overall energy requirements are lower,” a FAQ reads.

Headquartered in Langley, B.C. after its 2015 founding, CubicFarms also operates a facility in Pitt Meadows, B.C., and sells products to retail and wholesale customers under the brand Thriiv Local Garden.

Sioux Falls, S.D.-based HydroGreen was one of five finalists in the New Economy category at the 2022 South by Southwest (SXSW) Awards for its Automated Vertical Pastures (AVP).

“We actually met with several large consulting firms that have practices in the clean tech and carbon inset (and) offset space,” Dinesen said. “After speaking with all of them, Deloitte, we think, is very well positioned to help us immediately.”

To help determine how many credits can be generated, HydroGreen was involved in a comparison study with 344 dairy cows and 244 beef cattle. Some of its findings were:

– preliminary studies of beef cattle have demonstrated up to approximately 48 per cent lower methane emissions on a per-kilogram weight gain basis;

– feeding HydroGreen forage reduces methane emissions by about one metric tonne of CO2 equivalents, per year, per animal.

The first priority for the partners will be to develop a carbon inset program, which Dinesen expects in the next 90 to 120 days.

Insetting is the implementation of nature-based solutions such as reforestation, agroforestry, renewable energy and regenerative agriculture. Or as the World Economic Forum defines it, “carbon ‘insetting’ focuses on doing more good rather than doing less bad within one’s value chain.”

“That’s what Deloitte will be doing,” explained Dinesen. “Aggregating all of these things, (like the lowered methane emissions) and placing a value on that, then aligning us with groups that want to buy those credits.”

The program will use offsets generated by the AVPs to develop credits, although Dinesen said implementation is likely about a year away. Deloitte will verify the credits via the Verra carbon standard.

In addition to the methane emissions, he also noted a reduction in freshwater usage and in land needed to farm.

As an example of the system’s scale, HydroGreen is installing 12 AVPs at Burnett’s Land and Livestock in Wyoming to provide dairy cow feed. Dinesen said they will feed about 2,000 cattle at the 17,000-head farm.

It is believed to be the largest automated fresh feed system in the world.