Enbridge Gas has partnered with the Ontario Waste Management Association (OWMA) in a pilot projec... 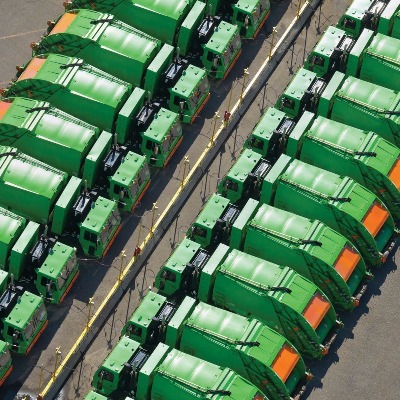 Enbridge Gas has partnered with the Ontario Waste Management Association (OWMA) in a pilot project to deliver low-carbon renewable natural gas to its fleet of waste collection and haulage vehicles.

OWMA members operate more than 3,650 trucks that burn approximately 130 million litres of diesel per year. The use of renewable natural gas (RNG) could save up to 56,000 tonnes of annual greenhouse gas emissions — roughly equivalent to removing 12,000 passenger cars off Ontario roads each year.

“It is an important example of the investments Enbridge Gas is making across multiple markets to green the natural gas grid while continuing to meet the demand for safe, reliable, and affordable energy.”

The association says over 40 per cent of Ontario’s waste sector expenses are related to transportation costs. This initiative will allow Enbridge to accelerate RNG production and infrastructure, while creating opportunities for decarbonization and reducing transportation costs.

OWMA is the province’s largest environmental services association representing the waste management and recycling sector. Its membership includes more than 250 companies and organizations in the private and public sectors, which manage 85 per cent of Ontario’s waste.

RNG is becoming a sustainable fuel option for heavy transportation companies, with some turning to biogas as a reliable alternative clean energy source.

It also plays a huge role in places like B.C., where the province could soon become the first jurisdiction in North America – and FortisBC, the first utility on the continent – to make renewable gas mandatory.

RNG offers several benefits: it captures methane; it can be blended into natural gas applications; and it holds up against extreme weather.

Made from food scraps, farm waste, or sewage, the biogas produced from the refinery process is turned into RNG to power homes, offices, industrial facilities and fuel transportation fleets.

RNG distributed by Enbridge is added to existing infrastructure systems and municipalities can produce and use RNG to manage costs and meet sustainability goals.

Enbridge estimates 440,000 tonnes of GHG emissions — roughly equivalent to removing 100,000 passenger cars off the roads each year — could be kept from the atmosphere annually if its plan to expand RNG production in the heavy transportation industry is realized.

Over the last two years, the company has been working with cities and municipalities to deliver RNG initiatives across Ontario. Projects include:

— a partnership with the City of Hamilton for the first RNG-fuelled bus in Ontario in March 2021. The RNG was produced at the StormFisher biogas facility near London, Ont. diverting 450 tonnes of organic waste from the landfill — equivalent to 38 garbage trucks. It also eliminated CO2 emissions from 36,000 litres of diesel a year.

— a partnership with the City of Toronto also led to RNG production using Green Bin organic waste. A biogas upgrading facility was installed at Toronto’s Dufferin Solid Waste Management Services site, and the RNG produced is injected into the natural gas grid for use by the city. It saves more than 9,000 tonnes of carbon being released into the atmosphere annually.

— an agreement with Walker Industries and Comcor Environmental to build the Niagara Falls Renewable Natural Gas plant. The $42-million facility, announced in October 2020, is expected to generate enough renewable energy from landfill waste to heat 8,750 homes and reduce greenhouse gas emissions by 48,000 tonnes.

OMWA project part of greater efforts in the sector

As industry organizations like OWMA look to lower annual emissions and be a part of creating a circular economy, the pilot project could lead to more economic and environmental commitments from Canadian waste management companies.

“There is a strong signal that the time to act in our industry is now and ensure we harness the economic and environmental value of low-carbon fuels,” said Mike Chopowick, OWMA’s chief executive officer, in a statement.

In its ReThink Waste 2022 Policy Report, released in January, OWMA suggested moving toward a circular economy, through the right investments, could create 13,000 jobs and provide a $1.5-billion boost to the province’s GDP.

It also called for the reduction of red tape to allow companies to invest in Ontario waste facilities and recommended the government unleash lingering private sector investment in waste systems infrastructure by reforming and reducing costs.

“Ontario’s waste sector wants to do its part in reducing emissions and recover more resources from waste. This partnership is the beginning of a generational transformation of how we better manage waste to achieve a low-carbon future,” Chopowick said.

“To date, annual emissions reductions from Ontario’s 600 gaseous fuelled refuse vehicles include a 90-per-cent reduction of combustion emissions that create smog and have other health impacts,” said Bruce Winchester, executive director at CNGVA.

“In addition, these vehicles are also reducing greenhouse gas emissions by 10,000 tonnes per year — equivalent to removing 2,000 cars from Ontario’s roads.”