Cleantech development and services company CHAR Technologies Ltd. has announced it will own and o... 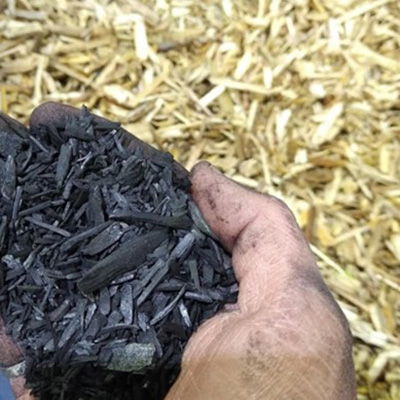 Cleantech development and services company CHAR Technologies Ltd. has announced it will own and operate a high-temperature pyrolysis system (HTP) in Saint-Félicien, Que.

The HTP will be located adjacent to a biomass power plant on land reserved for CHAR by the city, producing an estimated 5,000 tonnes per year of biocarbon and 250,000 GJ per year of renewable natural gas. The project will be phased, producing biocarbon for metallurgical and carbon credit generation first to allow for more rapid deployment and a shorter time to initial revenue.

While there’s no firm date for the launch of the Saint-Félicien project, CHAR CEO Andrew White said it would take 18 and 24 months. It had taken almost a year from the project’s genesis to the announcement it was ready to proceed.

HTP is a system in which woody biomass materials are collected and transformed into green hydrogen and renewable natural gas.

The material is placed into an airless cylinder where pyrolysis can occur; a process White described as “heating (materials) up in the absence of oxygen.” The CO2 is heated from outside the cylinder, so no flame touches the biomass materials.

A thermal, chemical conversion then occurs, breaking down the material into a gas and a solid. The solid is biochar, which can be used for carbon offsets in the coal and steel industries. The former is a thin gas rich in hydrogen which can be extracted or taken through methanation to create renewable natural gas.

One example of CHAR’s HTP system operates at its London, Ont. biocarbon facility. The process is currently undergoing a front-end engineering and design (FEED) study to develop an HTP system to convert rice husks into green hydrogen.

The end goal of the FEED study is to build an HTP plant close to where rice husks are being generated to produce hydrogen from the gas. Rice husks were brought to the company’s attention via a client and are considered a good source because they are a disposable agricultural byproduct.

“It’s a residual from producing that doesn’t really have a good use. A big part of our philosophy is that we say we’re decarbonizing for the circular economy,” White said. “What that really means is, we’re looking at the circular economy concept where, ‘how we can add value to these extremely low-value materials and ideally, while we’re (doing this), for the end goal of decarbonizing our industrial process?’ ”

Each HTP facility is built specifically with the surrounding ‘feedstock’ in mind. In the case of the Saint-Félicien project, the feedstock will come from the nearby Saguenay-Lac-Saint-Jean region from what White calls “unmentionable woods” – the portion of trees that currently has no commercial use.

CHAR also offers wastewater treatment services, such as its project with Algoma Orchards in the Durham region of Ontario, just east of Toronto. CHAR can take wastewater from apple growers and clean it to the point it can be used to wash equipment.

CHAR became involved in this particular branch of sustainability after going public in 2016. Two years later, it acquired Alltech Group, a distribution service based in Vaudreuil-Dorion, Que. One of Alltech’s industrial services was wastewater, so it seemed like a natural fit for White.

“It allowed us to expand a little bit, while internalizing a bunch of resource requirements,” White said. “It aligns very well with what our ambitions were.”

White co-founded CHAR as a result of his graduate thesis research at the University of Toront0 while earning his masters’ degree in chemical engineering in 2010. He also has a master’s in business, entrepreneurship and technology from the University of Waterloo.

White doesn’t preclude expansions into other areas in the future but said the type of product has to be specific to its existing business.

“We’re not going to get into solar, or fusion, or geothermal energy, or anything like that,” White said. “As long as it’s within industrial water treatment at high-temperature pyrolysis-type work, then yeah, absolutely.”

The company is eyeing several more areas in Canada as potential sites for HTP plants. While White declined to reveal upcoming plans, Kirkland Lake in Ontario was previously announced as one such possibility. Last September, CHAR presented its case to the local municipal council.

In February, CHAR announced a financing round hoping to raise $3 million in equity, expected to close later this month. The funds will be used to develop both contracted and earlier-stage products.

Next Hydrogen selected for Black and Veatch tech accelerator