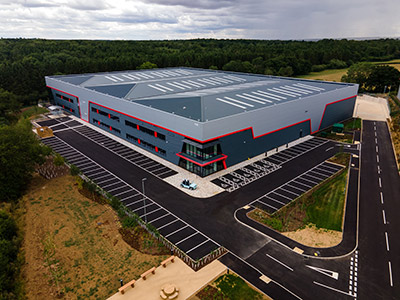 The EV Technology Group Inc. (EVTG) has secured a 90,000 square foot building lease at MEPC Silverstone Park in the U.K., to house the firm’s EV Centre of Excellence.

The building has already been constructed by MEPC and is part of its 265,000 square foot development at the park. A release states the centre will allow the group (EVTG-NE) to rapidly expand electric vehicle manufacturing and assembly capacity.

“Silverstone has been the home to many iconic motoring stories – and our future electrifying iconic brands here will be part of its next chapter,” said Wouter Witvoet, EVTG’s founder and CEO, in a statement on the lease. “The site’s location puts us in the heart of the booming U.K. EV industry, and will allow us to scale manufacture and assembly of electric brands such as the iconic MOKE.”

In May, SustainableBiz reported on EVTG’s collaboration with film production company SensCritique to bring the MOKE electric vehicle to the Cannes Film Festival, via its subsidiary MOKE France SAS.

This followed EVTG’s acquisition of the British Tier 1 supplier and specialist manufacturer, Fablink Group Holdings Limited, which is also the vehicle manufacturing and assembly partner of MOKE International — a company that had already been acquired by EVTG.

The company will retain its leadership team, employees, facilities and global customer base, with CEO Richard Westley to be appointed as EVTG’s COO upon completion of the acquisition later this year.

Fablink has about 750 employees across seven manufacturing sites, with over $110 million in annual revenues.

EVTG was founded in 2021. It has its headquarters in Toronto.

Vancouver-based Euro Manganese Inc. has completed a life-cycle assessment for its Chvaletice Manganese Project in the Czech Republic. Manganese can be a key element in the manufacture of lithium and other types of batteries.

The Chvaletice mine is about 90 km east of Prague and the project involves recycling tailings from the decommissioned site which operated between 1951 and 1975. A release states the project is the only sizeable manganese resource in the European Union.

In fact, Euro Manganese (EMN-X) states the project could fulfill 20 per cent of the projected 2030 European demand for high-purity manganese. The company is aiming for a mix of half solar energy and half wind energy to power its processing plant at Chvaletice.

The assessment was conducted by the U.K.-based consultancy Minviro Ltd. and RCS Global Group., an auditor of battery material supply chains.

Activities in the mine are conducted through its subsidiary, Mangan Chvaletice sro, which holds a 100 per cent interest in the project.

The GreenPower Motor Company Inc. has delivered the first of its EV Star cab and chassis to Workhorse Group Inc. under an agreement announced in March.

The companies signed a multi-year supply agreement for 1,500 Star cab and chassis units, which will be used in Workhorse’s Class Four W750 step van line. GreenPower (GPV-X) is planning about 200 deliveries per quarter.

The deliveries are occurring under a 21-month schedule from July 2022 through March 2024. The first eight were delivered in July and another shipment of eight was to occur in early August.

The W750 is designed to offer up to 240 km of all-electric range, with a payload capacity of 2,200 kg, 60kW DC fast-charging and optional 60 kW wireless-charging capabilities. The vans will be available in the U.S. and Canada under the Workhorse brand.

“We believe our space will be the largest EV OEM in the Class Four and possibly in the school bus space entirely. That’s our goal,” CEO Brendan Riley told SustainableBiz in March. “The Class Four space is maybe 50,000 to 100,000 vehicles a year in total addressable market. Once we hit 10 per cent of that with EVs, we will consider ourselves very fortunate and successful.”

Although founded in Vancouver in 2010, GreenPower’s primary operational facility is in Porterville, Calif.

The TSX Venture Exchange has approved the listing of the U308 Corp.‘s shares under the symbol UWE.

U308, based in Toronto, is the owner of the Berlin deposit in Caldas Province, Colombia. The uranium deposit also contains vanadium, phosphate and nickel among other elements.

There are estimates of over 760,000 tonnes of phosphate in the deposit. Phosphate is a key element to the lithium ferro-phosphate (LFP) battery rapidly gaining market share as safe and cost-effective in comparison to other lithium-ion batteries. It is the first lithium-ion battery to fall below a cost of $127 per kilowatt-hour, the price point at which electric vehicles become cost-competitive with internal combustion vehicles.

BYD Company Ltd., Tesla and Ford are among the companies using LFP batteries in their EVs.

Neodymium, another of the earth elements in the Berlin Deposit, is a component of magnets used in electric motors.

While there is a link for pre-orders on the company website, TUGA prototypes remain subject to testing and regulatory approval before commercial sales will commence.

The developmental-stage company will first launch its Commuter and Deliver models. There are also Thunder and Falcon models, TUGA’s limited edition and high-performance versions, respectively. Both are akin to roadsters.

Finally, the Cargo and Pickup models each offer 600 litres of cargo space.