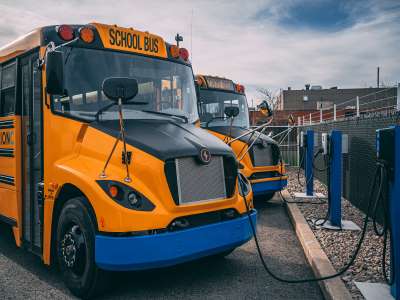 Lion Electric’s Lion C school bus is among the electric vehicles the company has sold in the second quarter of 2022. (Courtesy Lion Electric)

Canadian electric vehicle (EV) manufacturer Lion Electric ended Q2 2022 with a leap in its revenue and EV deliveries, while operating at a gross loss.

Lion Electric attributed the higher revenue to an increase in vehicle sales. It sold 105 vehicles in the second quarter, comprised of 90 school buses and 15 trucks. Ninety-one of those vehicles were sold in Canada and 14 in the U.S.

It noted the challenges from the still-struggling global supply chain, which forced delays on the final assembly of some vehicles and led to increased inventory levels.

For the quarter, Lion Electric posted a gross loss of $4.5 million, as compared to a gross profit of $1.16 million a year ago. It also continued at an operating loss of $28 million and net earnings loss of $48.3 million.

Lion Electric reported having over 700 EVs on the road and approximately 1,300 employees on its payroll in the second quarter of 2022.

Marc Bedard, CEO and founder of Lion Electric, commented on the quarterly report: “We are pleased with our Q2 performance, as in spite of ongoing supply-chain challenges, for the third quarter in a row, we delivered a record number of vehicles in the history of Lion.”

He said the company was beginning operations at its Joliet, Ill. manufacturing facility and Mirabel, Que. battery plant as an impetus to “adjust the cadence of our capital spend.” Lion Electric said in an earnings call presentation it expects to incur a total capital expenditure of around $103 million in 2022 for the Joliet facility. It anticipates a production capacity of 20,000 vehicles-per-annum capacity at full scale.

Lion Electric said the battery plant remains on track to produce the first modules and packs by the end of 2022, and incur approximately $129 million in capital expenditure by 2022.

Other bright spots include an order book of 2,357 all-electric medium- and heavy-duty urban vehicles as of Aug. 4, 2022, consisting of 286 trucks and 2,071 buses. The order book represents a combined total value of approximately $740 million based on management’s estimates.

The company’s EV charging business named LionEnergy has an order book of 226 charging stations and related services as of Aug. 4, representing approximately $3.8 million.

Lion Electric listed government incentives as a force propelling EV adoption in Canada and the U.S. In an interview with the Financial Post, Bedard said federal incentives for EVs would “make a huge difference,” because, “In the EV space right now, the real challenge is the higher sticker price.”

On the federal level in Canada, those incentives include:

– and Incentives for Medium- and Heavy-duty Zero-Emission Vehicles (iMHZEV), a $547.5 million fund spread over four years focused on trucks.

Provincially, Lion Electric pointed to Quebec’s $5 billion plan to electrify over 50 per cent of transit buses by 2030, $250 million for school bus electrification, and $246 million for EV trucks through the new EcoCamionnage program.

He also put emphasis on the Inflation Reduction Act which recently passed the U.S. Senate, and is expected to unlock billions in funding for clean energy and transportation while putting the country closer to its 2030 greenhouse gas target.

Nicholas Sokic Transportation Lion Electric International Jul. 22 2022
Tyler Choi Business editor, Sustainable Biz Canada
Tyler Choi is a journalist based in the Toronto area. He has covered a wide range of sectors ranging from science and technology, the environment, business, government policy and crime, to finance. Among the many people he has interviewed, his favourite was an Ig Nobel Prize winner.