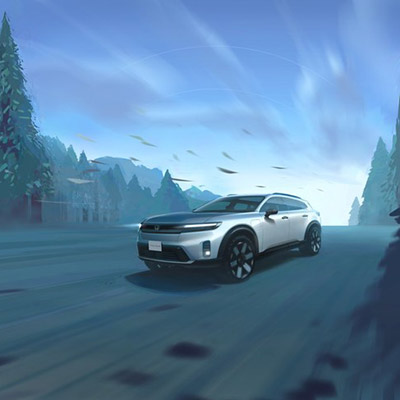 Honda Canada Inc. has revealed the first design sketch of its all-electric SUV Prologue launching in 2024.

The idea for the vehicle originated at the Honda Design Studio in Los Angeles, in collaboration with a design team in Japan. It was co-developed by GM. A release states it is the first Honda (HMC-N) vehicle designed using virtual reality.

The design team focused on reducing cabin noise, given the lack of an engine would make wind and other exterior noise more noticeable.

“The Prologue is Honda’s first electric vehicle in Canada and is the result of a strategic North American plan announced two years ago that includes a collaboration with GM to produce EVs in a more efficient manner,” said Steve Hui, Honda Canada’s vice president, in a prepared statement.

“The Prologue signifies our transition to electrification, with more Honda-engineered and manufactured EVs in North America coming in 2026.”

The Prologue is part of Honda’s goal to be a carbon-neutral company by 2050. It plans to introduce 30 EVs globally by 2030, with a volume of two million units. That same year, Honda plans to have sold 500,000 EVs in North America.

Honda Canada was founded in 1969 and has its head office in Markham, Ont. It has produced almost 10 million cars and light trucks at its Alliston, Ont. manufacturing facilities, where the Honda Civic and Honda CR-V are currently built.

Natural Resources Canada announced a $3.54-million investment to B.C.’s Ministry of Energy, Mines and Low Carbon Innovation to help fund up to 810 EV charger installations across the province.

It will be funded through the Zero-Emission Vehicle Infrastructure Program (ZEVIP).

The chargers will be installed at multi-unit residential buildings, workplaces, or facilities for servicing light-duty vehicle fleets by October 2023.

A press release states investments in charging infrastructure made so far will result in more than 25,000 new chargers across the country. The federal government hopes to see 50,000 zero-emission vehicle chargers installed in Canada.

GreenPower Motor Company Inc. has announced its all-electric school buses are eligible for rebates under the Environmental Protection Agency (EPA) Clean School Bus program in the U.S. It says the Type D BEAST is eligible for up to $375,000 in rebates, and up to $285,000 for the Type A Nano BEAST.

The BEAST is a 40-foot, 90-passenger capacity, Type-D school bus and The Nano BEAST is a 25-foot Type-A school bus available with standard or accessible seating. Both have a range of 150 miles and can charge up to 20 KW on a DC fast charge.

GreenPower (GPV-X) is based in Vancouver, but has primary facilities in Porterville, Calif.

In March, GreenPower signed a deal with Workhorse Group to supply 1,500 of its EV Star cab chassis units to the company.

“We believe our space will be the largest EV OEM in the Class Four and possibly in the school bus space entirely. That’s our goal,” GreenPower president Brendan Riley told SustainableBiz in an interview at the time.

Exro CEO to speak at TechCrunch and Collision

Exro Technologies Inc. CEO Sue Ozdemir is getting the word out about her company’s new Coil Driver technology — an EV replacement for the classic inverter.

She presented at TechCrunch Sessions on mobility in San Mateo, Calif. a week ago, and will speak at Collision in Toronto from June 20 to 23.

At TechCrunch, Ozdemir led a roundtable entitled, “why you can’t build a new EV in corporate America.” She and the company also contributed to discussions on the state of the mobility industry alongside executives from Volkswagen Group, Waymo and Cruise, among others.

At Collision, she will join Doug Campbell, founder and CEO of Solid Power, and Sebastian Gendron, CEO of Transpod, for a panel discussion on Fast-tracking Sustainable Infrastructure, hosted by Akiko Fujita, anchor and reporter for Yahoo Finance.

Exro (EXRO-T) will also participate in the auto/tech section of the conference to discuss concepts disrupting the auto industry alongside companies such as GM and Uber.

Additionally, the Calgary-based company recently added Rod Copes to its board of directors. Copes is the recently retired COO of American EV automaker Rivian. He had previously joined the company’s advisory board in March.

South Star Battery Metals Corp. has announced phase one of construction starting June 2 on its Santa Cruz graphite mine in Southern Bahia, Brazil. The Vancouver-based battery metals project developer expects production at the site in Q2 of 2023.

Graphite is a critical component of the anode in EV batteries.

Brazil is the second-largest graphite-producing region in the world with more than 80 years of continuous mining.

“We look forward to kicking off construction and continuing our focused approach to delivering on our long-term goals and objectives,” said Richard Pearce, South Star’s president and CEO in a statement. “The start of commercial production is now in sight, and this is the perfect time to have a strategic, scalable asset in an important jurisdiction coming online in the critical battery metals supply chain.”

South Star’s (STSBF) next project is a historic mine in Alabama which was active during World Wars I and II. Trenching, sampling, analysis and preliminary metallurgic testing has been completed.

The EV Technology Group Inc., via its subsidiary MOKE France SAS, is collaborating with film production company SensCritique to bring the MOKE electric vehicle to the Cannes Film Festival.

The group, founded in 2021, is based in Toronto and is focused on electrifying brands.

The MOKE, invented in 1964 and seen in James Bond films, is akin to a street-legal golf cart. The group is also an investor in and strategic partner with MOKE International Ltd., which announced the production of the first fully electric MOKE. Under development for the past three years, it is being manufactured in the U.K.

At Cannes, the MOKE is featured in a number of SensCritique celebrity interviews.

“Seeing the first Electric MOKE vehicle come off the production line is a momentous step,” said Wouter Witvoet, the group’s CEO, said in a statement. “The MOKE is truly iconic and we are seeing high demand for this electric variant – particularly in the south of France. We are excited to be backing MOKE and helping take the first iconic brand in our portfolio into an electric future”.

In April, the EV Technology launched an electric vehicle subscription service utilizing the MOKE. In the same month, the company entered the Canadian market via the Neo Exchange under the ticker EVTG-NE.

Vancouver-based Euro Manganese Inc. has shipped its final demonstration plant modules from Shanghai to Hamburg. The battery materials company (EMN-X) produces manganese for the EV industry and other applications.

The first consignment was shipped on April 30.

Each module will be shipped to the Chvaletice Manganese Project site in the Czech Republic by rail. The mine is about 90 km east of Prague and the project involves recycling tailings from a decommissioned mine that operated between 1951 and 1975. A press release states the Chvaletice Project is the only sizeable manganese resource in the European Union.

In fact, Euro Manganese states the project could fulfill 20 per cent of the projected 2030 European demand for high-purity manganese.

Delivery is expected in June and July respectively, with assembly commencing on arrival. Commissioning is targeted for September and first delivery of samples to customers is expected in the late 2021.

Activities in the mine are conducted through its subsidiary, Mangan Chvaletice sro, which holds a 100 per cent interest in the Chvaletice Manganese Project.