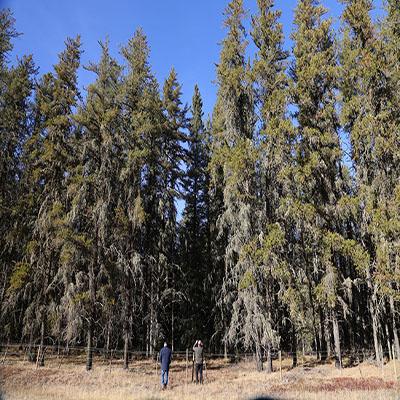 The program will offer forestland owners and First Nations communities managing their lands the opportunity to receive revenue from the sale of their forests’ carbon offsets.

The program was created following the recent approval of the methodology for improved forest management (IFM) on Canadian forestlands, by the American Carbon Registry (ACR), an arm of the non-profit Winrock International. The methodology means the most widely used forestry offset protocol for voluntary projects in North America has now been adapted for Canada.

Genesis of the Finite Carbon program

According to David Stevenson, Finite’s director of Canadian operations, the genesis for the project came in 2018 when Finite noticed some of the work being done in forest carbon offsets in Alberta.

“Alberta has got a very well-established compliance program for large emitters,” Stevenson said, “but they lack the forestry offset protocol. So one of the reasons for establishing in Canada was to develop a forestry offset protocol for Alberta, which we’re undertaking, but also to adapt the U.S. protocol that’s used in the voluntary markets for Canada as well.”

Stevenson said other protocols for voluntary markets in Canada were not as “user friendly” as the ACR program. As well, the protocols overall only apply to private land, where in Canada most forestry is Crown-owned land.

Finite is in conversations with multiple First Nations across Canada, which will continue as the program rolls out. He said getting a project like this off the ground can take up to two years.

In the United States, two-thirds of Finite’s offset issuances are on Indigenous lands.

“One needs to be very careful managing the First Nations and Indigenous lands, because their goals are different. Their conservation ethos is different than a private landowner in Ontario, who might want to just harvest to earn revenue,” Stevenson said. “They understand the desire to manage their lands sustainably.”

“They’re very concerned about climate change and how it impacts their traditional use of land.”

Landowner goals are a significant part of the conversations, including the areas they want to protect or develop, and how carbon projects fit into their planning as a long-term commitment.

The future of forestry offsets in Canada

Canada has nine per cent of the world’s forests within its borders, though not all of it is private or ideal for a carbon offset project due to other conservation efforts.

“I’d like to be wildly optimistic and develop nine per cent of the globe’s forest (as a) forest carbon project, but I’m also quite realistic,” Stevenson said. “It’s going to be a small subset of that.”

Given that many of Canada’s offset programs are still being developed, he said it’s hard to predict Finite’s five-year plan.

There is no national carbon offset compliance program, although Alberta, B.C. and Quebec have existing provincial programs. Saskatchewan is exploring an offset program, with more information expected later in 2022.

For now, Stevenson, who was hired in January as one of two people on the Canadian project, said they have a number of landowners lined up. Obviously, the company is aiming for more, given that forestry offsets are its specialty, and that “success breeds success.”

Despite that specialty, he doesn’t necessarily rule out Finite branching into other offsets in the future.

“We’re certainly not going to just do forestry offsets if there’s something else that’s related but it’s like anything, you got to work with what you know,” Stevenson said. “So are we going to get into grasslands offsets? Let’s see how we do forestry in Canada first, but never say never.”

Finite Carbon was founded in Pennsylvania in 2009 and now has offices in Tallahassee, Fla., and Portland, Ore.