The City of Toronto has broken ground at the North East Scarborough Community and Child Care Cent... 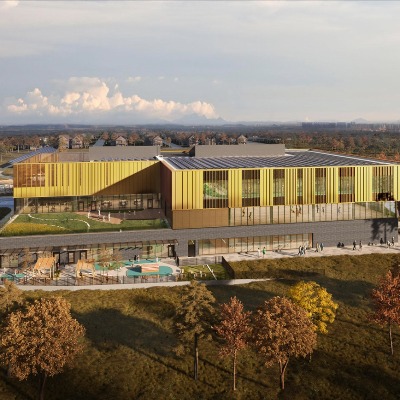 The City of Toronto has broken ground at the North East Scarborough Community and Child Care Centre, which will be Ontario’s first net-zero emissions community centre.

The centre was designed by Perkins&Will architects and is being constructed by Aquicon. The official groundbreaking at the site was held Thursday.

“As a community centre, especially with an aquatic component, this is a fairly significant accomplishment; typically, these facilities are very process-energy driven,” Zeina Elali, senior sustainability advisor, sector lead at Perkins&Will, told SustainableBiz.

“They’re quite big energy guzzlers and it’s been quite difficult to get them to zero-carbon and zero-energy. By starting with a very passive design, we introduced very aggressive energy-saving measures when it comes to the active mechanical systems within the facility that are completely electrified.”

The PVs will be located in the parking lot and provide electricity for the facility. The PVTs generate both electricity and heat, and will be utilized for the building’s aquatic centre.

Developed with a net-zero energy and emissions strategy in mind, the $40-million building will also see a 16 per cent reduction in embodied carbon due to its sourcing of sustainable construction materials (SCMs), Elali said.

The completed build is expected in fall 2024, she added.

The property is located in one of the city’s most culturally diverse and rapidly growing neighbourhoods. Because of this, Perkins&Will tailored its approach and design to accommodate the area’s unique needs, Elali said.

She added that the firm’s design approach is viewed through multiple lenses, including traditional sustainability standards, environmental mitigation, conservation and resilience.

“We acknowledge that climate change is happening,” Elali said. “Building a design that can withstand future climatic scenarios as well as socio-economic scenarios (is key to our approach).”

“We (look at opportunities for) equity regeneration and use resources available on-site as an opportunity, rather than something that needs to be mitigated, such as stormwater, such as solar, such as wind, for example.”

The real challenge came with incorporating an energy-efficient aquatic centre, said Elali. Perkins&Will had to figure out how to meet the needs of the community, which has an active swim program, without having negative consequences on the environment.

“These types of facilities require additional heating, dehumidification and the tempering of heating of the water itself. On the rooftop, instead of using just PV panels for renewable energy generation, it actually uses PVT panels and solar thermal panels that help warm the water that goes into the aquatics pool, so we expect the technology to support the needs of the facility.”

At a time when embodied carbon from building construction is responsible for 10 per cent of all energy-related emissions globally, companies like Perkins&Will are seeking ways to mitigate this impact.

It is working with construction suppliers and other architectural firms, sourcing SCMs and studying passive design strategies to reduce emissions and cut energy costs.

“This project required a lot of creativity from our team and that’s what you need. We can design it sustainably as much as we can, but unless you have the right construction team in place to carry on that vision and build it sustainably, your vision could very easily fall through,” said Elali.

Air tightness in design is also a critical component, and Elali said air-tightness testing will determine where there are thermal breaks or minimal thermal bridging.

“We carry out embodied carbon assessments, and I think making a conscious decision to make it part of your design process, uncovers opportunities that you wouldn’t have known were there,” said Elali.

“It doesn’t necessarily mean that it has a cost; it’s just a form of your evaluation. Our design savings is 16 per cent, but we may end up with an even better number by the end of construction, so it’s been a pilot project for the City of Toronto on many levels and us.”

Thanks to its vertical stacking design, the three-storey building will also include the first indoor cricket pitch in Toronto. It will also have leisure and lap pools, childcare, a running track, studio spaces, a playground and a skate park.

“Toronto is one of the most inclusive cities in the world, and with that comes significant responsibility to create dynamic spaces that reflect communities’ needs for culturally relevant and diverse programming,” said Phil Fenech, principal at Perkins&Will’s Toronto studio, in a statement.

The design team also included PMA Landscape Architects on the outdoor features of the facility.

Driven by the City of Toronto’s 2019 declaration of a climate emergency, Perkins&Will has also done several other sustainable projects in Toronto. Among them are a LEED-certified building at York University’s Keele campus in North York, and the Albion Public Library in Rexdale which achieved Tier I under the Toronto Green Standard.

Elali also said the firm is due to begin construction on another recreational centre in nearby Vaughan — the Carrville Community Centre, Library, and District Park — later this year.

Founded in 1935 in Chicago, Perkins&Will designs civic and cultural buildings, corporate interiors and other urban hubs in cities around the world, including the U.S., Africa and China.