Intelligent City Inc., has raised $22 million in Series A funding to advance its ambitions of an... 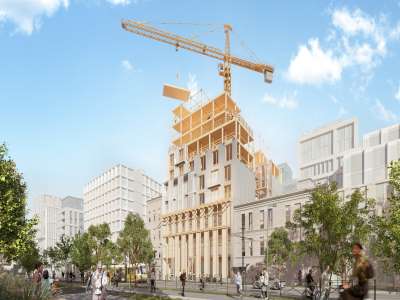 Intelligent City Inc., has raised $22 million in Series A funding to advance its ambitions of an environmentally and socially sustainable housing industry using automation to build prefabricated, mass-timber structures.

The Vancouver-based firm aims to achieve the dual lofty goals of combatting climate change and housing affordability with its Platforms for Life (P4L). The platform combines robotics and in-house software to build homes based around Passive House principles.

“We call it Platforms for Life because it’s an enabler. It’s an enabling technology; it’s enabling better urban living, that’s our ultimate mission, is we want to empower people to live better, more affordably, more sustainably,” said CEO Oliver Lang in an interview with SustainableBiz.

Environmental and social sustainability “for life”

Lang sees a sea change made possible with prefabricated homes across the housing industry, as sustainability becomes focal and homeowners start to ask, “Wow, my children can’t even live in the same city anymore that I do.”

P4L manufactures the structural systems and shells of high-rise buildings using automated industrial robots which cut, machine, lift, place, glue and nail the components for primarily mass-timber housing. After the parts are made, they are transferred to the construction site to be assembled.

Currently, about 35 to 40 per cent of the process is automated, with the aim of reaching total automation.

Lang emphasized the benefits of mass timber as a sustainable and robust building material. Mass timber is a composite of wood products assembled with adhesives to retain strength. Unlike concrete or steel, mass timber stores carbon and produces fewer greenhouse gas emissions during its creation, addressing embodied carbon concerns in new construction.

It also retains fire-resistant qualities and tightness against acoustics, air and water, and can eliminate the need for drywall.

As the components are built in the manufacturing plant, Lang said it minimizes waste and allows for a level of quality control that facilitates building life spans of 100 years, rather than 40 to 60 years for traditional building methods. Combined with Passive House design principles stressing energy efficiency, such as continuous insulation, air-tight seals, and high-performing windows and doors, Lang said P4L can cut operational carbon by 90 per cent compared to conventional building methods.

With efficiency of prefabricated house creation, Intelligent City claims it can achieve 50 per cent savings on life cycle costs per home. This also falls into the second aim of Intelligent City – enabling more affordable housing.

Lang said one additional benefit of prefabricated housing assembly is a quieter construction process. This can alleviate some concerns from nearby residents in low-density neighbourhoods.

“Because everything is prefabricated, everything comes together quickly, quietly, sustainably; people are much more sympathetic to a prefabricated wood building that can be assembled in four or five months, than two years of jackhammering and concrete and big trucks coming in every day,” he added.

Intelligent City has completed two projects in Vancouver: Roar One and Monad on 4th. It is preparing to build a nine-storey mid-rise and 18-storey rental high-rise tower in Vancouver, with plans for growth across Toronto and Ottawa and the United States.

The CEO, who is also a principal and co-founder of Lang Wilson Practice in Architecture Culture, a Governor General’s Medal-winning architecture practice, pointed to the rise in sustainable housing policies emerging across urban centres like Vancouver, Toronto, the Bay Area and Portland as incentivizing ways to build better. Lang cited a recent Canada Mortgage and Housing Corporation rental housing policy which insures mortgages for owners who qualify on the basis of the performance of their building, rather than just affordable rents.

“If you get toward a much better carbon paradigm with Passive House equivalent, etc., you get funding.” Regulatory requirements encouraging carbon neutrality through Passive House and offsite prefabrication are “now being incentivized and transferred so the industry adopts this faster,” Lang said.

Alongside tackling environmental and housing affordability concerns, Lang noted the potential for P4L to reshape cities to be less dependent on cars.

P4L structures are built to support “smart densification” to enable walking and biking with mixed-use buildings, he said, to reduce behavioural carbon as well as supporting social sustainability.

“I think that when we look at the need to densify cities around the world and how much we have to build, all cities are not changing the planning policies for deep densification issues measures, and that’s what our product does.”

Lang said the value of its current properties and “what is moving forward” is a little over $100 million, with projects in the pipeline exceeding $500 million.

Intelligent City is now preparing for a Series B round of financing, to expand its manufacturing and market reach.

“It’s no longer aspirational, it’s what people what.”

Tyler Choi Real Estate Real estate National Jun. 9 2022
Tyler Choi Business editor, Sustainable Biz Canada
Tyler Choi is a journalist based in the Toronto area. He has covered a wide range of sectors ranging from science and technology, the environment, business, government policy and crime, to finance. Among the many people he has interviewed, his favourite was an Ig Nobel Prize winner.