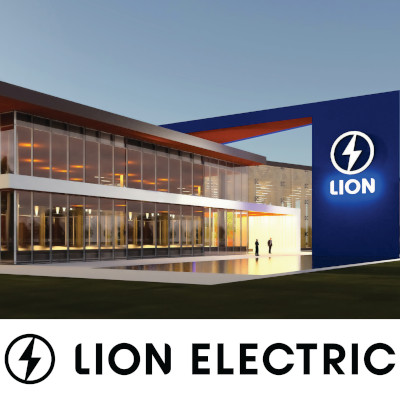 Electric school bus and truck manufacturer Lion Electric is building a $185 million battery manufacturing plant and innovation centre near Montreal, which will be able to produce about 14,000 medium and heavy-duty electric vehicles annually.

The aim of the battery plant is “to integrate what is arguably the key component of the vehicle into our supply chain,” said Brian Alexander, director of public relations at Lion Electric.

Having top-to-bottom control over battery production will “allow us some autonomy in a segment of the market that will really start to see some constraints with international competition and the supply chain going in(to) the next five years,” he said. “So it insulates us from the market pretty well.”

The new plant will give the company greater control over an increasingly competitive market.

Lion Electric will be the first Canadian manufacturer of medium and heavy-duty vehicles to have its own automated battery pack and module manufacturing capability.

“One of the main things that we gain from it is a lot of operational efficiency,” Alexander said. “We’re also going to have cost savings – we’re not buying batteries, modules and packs from many different sources and then integrating them into our own packs.”

The company currently assembles battery packs at its Saint-Jérôme facility after it obtains cells or modules from partners such as Romeo Power in California and BMW.

The Canadian and Quebec governments are each providing $50 million loans while Lion Electric is paying the remaining $85 million for the heavily-automated facility.

Alexander said the government loans are partially forgivable, primarily based on the company reaching employment targets for the new facility.

The plant and R&D innovation centre are initially expected to provide at least 135 jobs. But that number could reach 280 employees at full capacity, Alexander said.

Aside from its Saint-Jérôme facility, the company is building a 900,000 square foot manufacturing facility in Joliet, Illinois, which it said will be the largest dedicated production site for zero-emission medium and heavy-duty vehicles in the U.S.

Alexander said the batteries, many of which will go to the U.S. plant, should not face Buy America constraints. “Because we’ll be manufacturing vehicles in the U.S., it’s much less of an issue.”

He adds the company is working with the U.S. and Canadian governments to obtain exemptions from Buy America provisions for batteries, “so that we can really keep battery manufacturing in North America.”

Lion Electric now has more than 400 vehicles on the road with about eight million miles driven. The vehicles are primarily buses which have been on the market about three to four years longer than the company’s trucks.

As of August 12, the company had a vehicle order book of 262 trucks and 703 buses, representing a combined total order value of more than $280 million.

Alexander said there is greater potential for growth in the much larger truck market but “if the Biden administration decides to move forward with electrifying 20 per cent of the school bus fleet in the U.S., that would drastically change the short-term look of the marketplace.”

The Quebec government aims to have 65 per cent of the province’s school-bus fleet electrified by 2030.

“A lot of people come to us and say, ‘the bus is very expensive’ (but) they’re looking at the 155-mile bus, the maximum range we can do,” he said.

“They don’t realize that their routes are 30 miles so they can go with the 100-mile bus. That way we can bring the cost down pretty significantly by taking off essentially a couple of battery packs.”

Although most customers are purchasing with incentives, those that have bought buses without incentives “found that the savings from maintenance and energy cost reductions were so significant that they’re getting their investment back a lot sooner.”

Lion Electric sells its trucks to a wide range of major customers. Amazon and Ikea have bought box trucks from the company and CN ordered up to 50 trucks last year for use in urban intermodal operations. Waste Connections has become a customer for Lion Electric’s new refuse truck.

Lion Electric was listed on both the TSE and New York Stock Exchange in May.

In the second quarter, ended June 30, Lion Electric posted a net loss of US $178.5 million, compared with a loss of US $1.3 million a year ago, due in large part to higher administrative expenses. Revenue more than doubled to US $16.7 million from US $6.1 million a year earlier.

Electric trucks soon to roll between Edmonton and Calgary

Mario Toneguzzi Transportation Electric vehicles International Jun. 24 2021
D
Danny Kucharsky Business reporter
Danny is a multiple award-winning journalist based in Montreal, who has written for about 75 magazines and newspapers in Canada and the U.S. His credits include The Globe and Mail, Montreal Gazette, Maclean's, Chicago Tribune and a wide variety of business, specialized trade and medical magazines. Danny was also the Montreal correspondent for Marketing Magazine for several years.