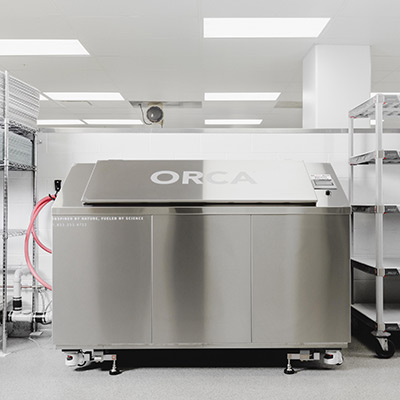 Minus Global’s ORCA OG50 Digester at the Edmonton EXPO Centre, which Planet Earth Recycling will have access to post-acquisition. (Courtesy Minus Global Holdings Inc.)

The Toronto-based Planet Earth, established in 1990, offers a variety of services including environmental consultation, wastewater treatment, risk assessment and waste diversion. It has a pre-treatment facility in Concord, Ont. that processes incoming food waste into a feedstock marketed to waste-to-energy facilities.

Minus CEO Louis Anagnostakos started in the recycling business in 1990, founding Turtle Island Recycling Corp. out of his parents’ garage in Toronto. He sold the business in 2011 to a private equity-backed buyer who later merged it with another Toronto-area company, Green for Life Environmental Corp.

Anagnostakos’ current project, Minus, is also a Toronto-based waste management company, but it is focused on eliminating the need for trucking this type of waste through the adoption of hyperlocal “smart waste” solutions, such as its ORCA Digester.

Financial terms of the transaction have not been released.

“For me it was starting these trucks up in the morning and watching them going to the different facilities that we had in Canada at five in the morning,” Anagnostakos said. “Even though we did a great job of recycling . . . we wanted to focus on technology that eliminates trucking, what we call ‘hyperlocal.’ ”

The companies say the acquisition will significantly expand Planet Earth’s service offerings to existing customers and allow it to expand its market penetration. This will include incorporating Minus’ proprietary food waste recycling technology, the ORCA Digester, which it created in 2012.

The ORCA uses microbiology, water and oxygen to digest organic food waste onsite within 24 hours, the company says. Once ORCA has reduced the waste to a liquid, the remaining liquid sewage, or effluent, is filtered through a 0.44 mm screen and disposed of into existing plumbing infrastructure, where it is transported through the sanitary sewer system to a wastewater treatment plant.

The effluent is comprised of 75 per cent water, 20 per cent carbs, fats and protein, and five per cent minerals. Wastewater treatment plants can use these by-products to produce renewable biofuels and natural fertilizers, the company says.

“The whole plan is to take trucking out of the equation,” said Anagnostakos.

The ORCA website states each machine can divert up to 416,100 pounds of food waste per year, depending on the size of the organization. Its four models can process between 15 and 100 pounds of food waste per hour. A third-party life cycle assessment found ORCA to be 20 times better than landfill when comparing its impact on climate change, and 10 times healthier than composting.

The company says the ORCA can ‘eat’ waste such as fruits and vegetables, eggs, cheese, meat and trimmings, fish bones and skin as well as pasta and rice. However, it’s unable to digest beef or pork bones, large pits, corn husks, liquids, oil or grease, coffee filters or tea bags.

Approximately 1.3 billion tonnes of food is lost or wasted each year, with a carbon footprint equal to about 3.3 billion tonnes of CO2. According to the United Nations Environmental Programme, if food waste was represented as its own country, it would be the third-highest GHG emitter behind the U.S. and China.

Current ORCA customers include grocery chains such as Sobey’s, Longo’s, Loblaw’s, Farm Boy, Whole Foods and as of the end of April, the food and facilities management service Sodexo Canada.

At the beginning of March, the firm invested $4.5 million in Minus. As part of the investment, Tom Kennedy, Kensington’s chairman, joined the Minus board.

It was also an original investor in Turtle Island Recycling Corp.

As of March, 2022, Kensington had $2.4 billion in assets under management.

This was Minus’ first acquisition, and took about six months to close according to Anagnostakos.

For Planet Earth, the acquisition is beneficial for more than just access to the ORCA technology. Anagnostakos described current wait times for delivery of new trucks of up to a year and a half due to supply chain issues, increasing recycling costs due to inflation, and a lack of labour in the supply chain.

“For them, it was an opportunity to be able to take on more business and reduce costs because the ORCA is significantly less expensive than recycling,” Anagnostakos said.

For Minus, the acquisition is a key part of its efforts to create a truck-free, hyper-local global recycling model.

“We’re going to bring technology into a business that has traditionally been picked up the same way it was 100 years ago, just thrown in the back of a truck. We’re here to change that.”